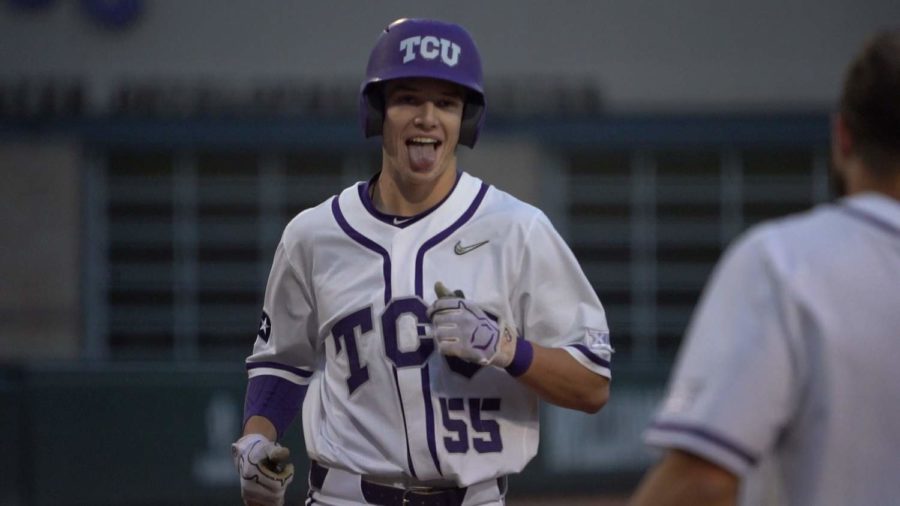 TCU baseball extended their win streak to six games after beating UTA 8-5 in Fort Worth, Texas, on March 1, 2022. (Photo courtesy of gofrogs.com)

Taylor responded to the early threat from the Mavericks with a two run shot, tying the game for the Frogs. After a few defensive blunders, shortstop Tommy Sacco was able to bring home first baseman David Bishop with a sacrifice fly.

In the second, center fielder Elijah Nunez, right fielder Porter Brown, and catcher Kurtis Byrne loaded the bases. With no outs, right fielder Luke Boyers hit into 1-2-3 double play. Taylor came up clutch, though, hitting a two out single to drive in the runners in scoring position.

After an uneventful couple of innings, Taylor once again reached base in the fifth. After Taylor stole second and advanced to third on a wild pitch, Sacco brought him to the plate with a single.

“That’s what we think he [Taylor] can do every game,” Saarloos said. “He’s been swinging the bat really well the whole start to the year.”

Brown, after the first, quickly settled in. He threw five straight scoreless innings, striking out nine batters. His fastball hovered around the mid to high 90s, with a couple in the 98-99 range. Saarloos was impressed with Brown’s composure after the first inning.

“He [Brown] usually doesn’t give up a ton of hits and for him it was probably a little bit of a shock to his system,” Saarloos said. “I thought he handled it extremely well.”

UT Arlington added another run in the seventh inning after relief pitcher Caedmon Parker walked in a run.

To give the Frogs more insurance, Byrne scored on a throwing error by the Maverick’s catcher while trying to pick off Brown.

The Frogs almost collapsed in the ninth after giving up a solo shot and allowing a run off an error. Closing pitcher River Ridings, after being sent in with the bases loaded and one out, got the final two outs for the Frogs to secure the victory.

The Frogs will travel to Lexington, Kentucky to take on the University of Kentucky, who has a 7-1 record.

“They’ve [Kentucky] gotten off to a good start, so it’s going to be a good challenge for us,” Saarloos said. “We’re looking forward to playing in their ballpark.”

The first pitch of the weekend series will be on Friday at 3 p.m.