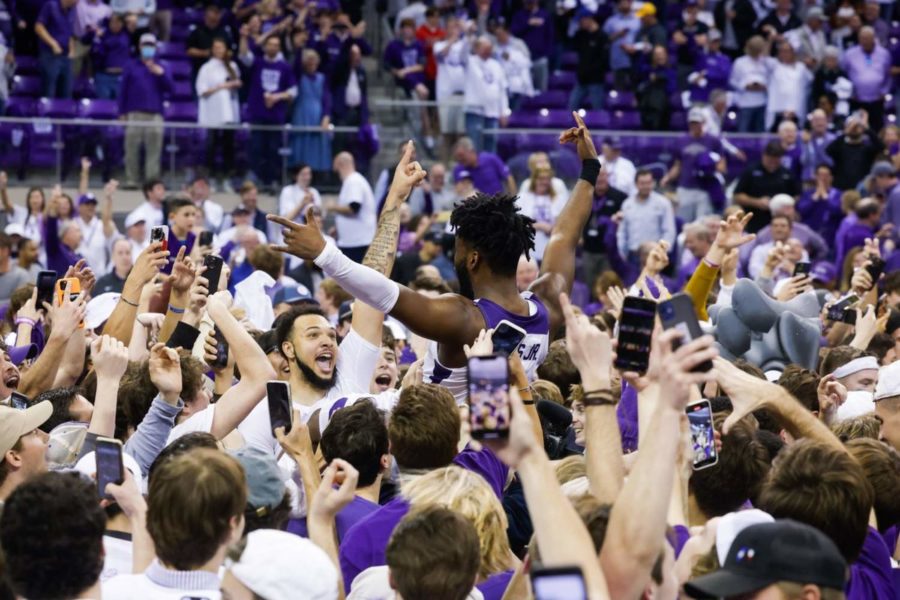 TCU guard Mike Miles (center) is lifted up by the fans at Schollmaier Arena following TCU's upset of No. 6 Kansas in Fort Worth, Texas, on March 1, 2022. (Photo courtesy of gofrogs.com)

“Keep a chip on our shoulder.”

Two games into that stretch, the Frogs are 2-0, as they have knocked off two-straight ranked opponents for the first time in program history.

Three days after taking down No. 9 Texas Tech, TCU kept rolling, stunning No. 6 Kansas 74-64 on Tuesday night in front of a packed-out Schollmaier Arena.

With Barstool’s Storm Chasers in the house and a t-shirt on every seat, Mike Miles and the Frogs silenced anyone that still doubted their status as a seed in this year’s NCAA tournament.

“I feel like it’s always those one or two teams that peak going into March. I feel like we’re one of those teams, our last two games showed that,” Miles said. “We’ve just been playing good basketball, making the extra pass, rebounding and playing defense and our last two wins show that. I’m just happy to be a part of it.”

As he did on Saturday, Miles led the game in scoring, putting up 19 points and a perfect 2-for-2 from behind the arc. The sophomore also added six assists and two steals on a team-high 35 minutes played.

After Kansas cut a 12-point TCU lead down to 4 with 47 seconds left, guard Damion Baugh went 6-for-6 from the free throw line to help seal the win for the Frogs.

“At the shootaround, we work on free throws. I just had to clear my mind. They trusted me to make free throws,” Baugh said. “I told Mike [Miles] at the end, me and him have to go get the ball, make free throws. The ball just found me so I stepped up and knocked them down.”

Baugh joined Miles as one of three Frogs in double figures. The Memphis-transfer finished with 11 points, five assists and zero turnovers.

As a team, TCU had just seven turnovers on the night, which is its lowest total since the start of Big 12 play.

Trailing at halftime, the Frogs held the Jayhawks to just 29% shooting in the second half. Kansas guard Ochai Agbaji, the Big 12’s leading scorer (20 points per game), finished 4-for-17 from the floor with 13 points.

Jayhawk forward David McCormack, one of the Big 12’s best big men, finished 2-for-6 from the field. TCU forward Eddie Lampkin guarded McCormack for most of the night, outrebounding his opponent 9-to-8.

“I think we contained the penetration as the game went on. I think that’s where we did the best job defensively,” Dixon said. “They’re [Kansas] so big and strong, you don’t look at them as being great penetrators, but they’re great at getting in the lane and kicking out. I think we got better at is as we played, and understood our switches and adjustments.”

It was as loud as it has been all season in Schollmaier Arena in the opening moments of the game.

On TCU’s first offensive possession, Miles pulled up for 3 with a hand in his face and drilled it, spurring a flurry of paper shreds in the air above the student section and a roar from the home crowd.

The culture here is so contagious. The fans energy gives us energy, and I think that’s special, man,” forward Emanuel Miller said. “There’s not a lot of colleges in America where it’s like that. Our student section is being ranked for a reason. They’re here, they’re supporting, and they’re standard throughout the 40 minutes of the game. Like I said last time, this is one of the best student sections I’ve ever been a part of.”

The Frogs’ advantage was short-lived, though, as an early 12-2 run by the Jayhawks put TCU down by six (15-9) with just under 14 minutes left in the first half.

A balanced scoring attack by the Frogs then helped TCU get back in control, as a bucket by guard Damion Baugh put them up 22-20 just four minutes later.

By that point, eight different players in purple and white had scored a field goal.

“I thought our guys were tremendous. We rotated guys and we really played nine, ten guys,” Dixon said. “It’s a strength of ours. We only have ten guys playing but they’re ten good guys. Ten valuable guys.”

The Frogs kept going. With just over five minutes to go in the half, Miles went on a personal 4-0 run that extended TCU’s lead to 28-24.

That lead got to as much as 5 for TCU time winding down in the first half, but Kansas then hit back-to-back wide open three-pointers to retake the lead going into the halftime break.

Despite outrebounding Kansas 20-14 and having only four turnovers, TCU trailed the Jayhawks 35-34 after the first 20 minutes.

Maybe it was the arrival of the Storm Chasers, but the Frogs looked energized at the start of the second half.

After the Jayhawks hit two free throws, TCU popped off on a 6-0 run that put the Frogs up 3, forced a Kansas timeout and had all 2,000 students in attendance bouncing up and down.

Moments later, the Frogs took their biggest lead of the game to that point at 50-43 on a strong layup from Miles.

Kansas pulled back within 3, but then TCU exploded on an 11-2, capped by a thunderous dunk from center Xavier Cork, that put the Frogs up by 12 with 7:09 left in the game.

A pure 3-pointer from Agbaji pulled Kansas as close as 7 at one point, but Miles then extended the TCU lead back to 9, crossing his defender into oblivion and knocking down a jumper with two minutes remaining.

“I looked at the clock, I had the ball, I knew I had to make something happen, so I just kind of lulled him to sleep,” Miles said. “Two slow dribbles, I just pulled up, and thankfully it went in.”

Kansas made the Frogs work for their upset late by hitting a trio of 3-pointers, but Baugh’s poise at the line ended up putting the nail in the coffin for the Jayhawks.

Along with Miles and Baugh, Miller also scored in double figures, putting up 11 points to go with seven rebounds.

TCU does not have time to rest on its laurels, as it heads on the road to face Kansas again on Thursday. Tipoff in Lawrence is scheduled for 7 p.m.