Party’s over: TCU basketball sees streak end in battle with No. 6 Kansas 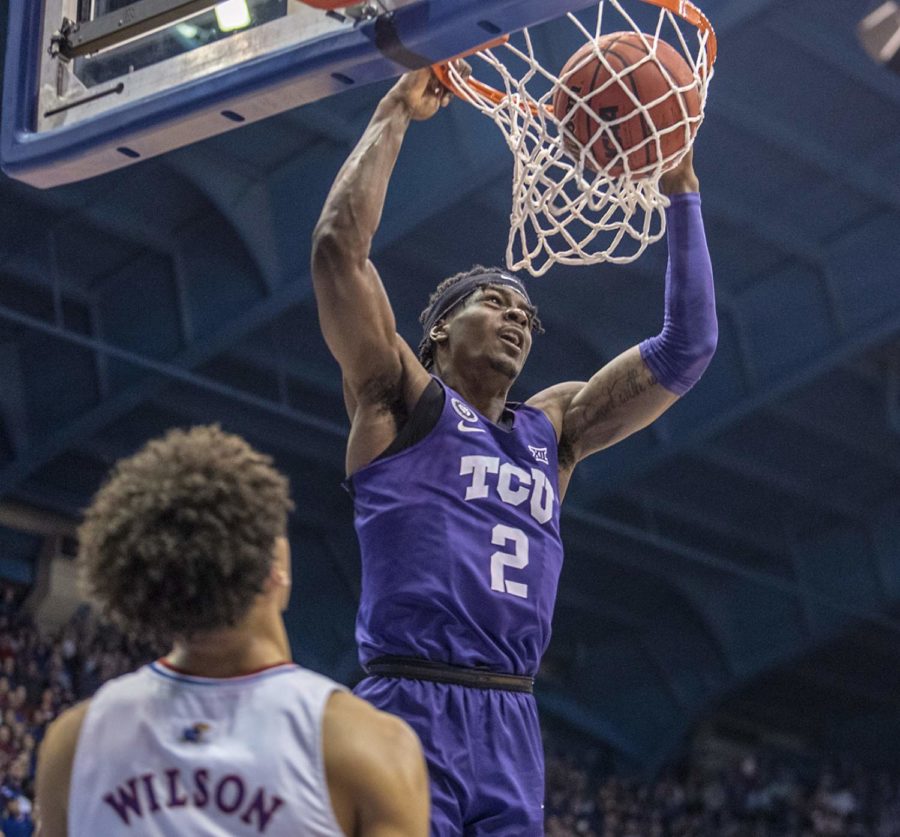 All good things come to an end.

After beating two top-10 teams in the span of four days, TCU basketball came a few possessions away from beating a third, falling in an all-out battle to No. 6 Kansas on the road on Thursday night.

The contest came down to the final play, but a layup attempt by guard Mike Miles with two seconds left was blocked on the Frogs’ final possession.

The sophomore motioned for a foul call, but he received no sympathy from the referees, and the Jayhawks hit a free throw on the other end to seal it.

“We didn’t really need a three, and I saw I beat him,” Miles said. “I probably got fouled but we weren’t getting them all night.”

“I like our best guy [Miles] going to the rim too with that much time left in a situation like that,” Dixon said. “I think it can be questioned after the fact, but I think Mike made the right decision, right choice. I totally support him on that.”

TCU had trouble with the refs from start to finish, as the Frogs were called for 22 total fouls. Miles alone had four, three of which were called in the second half.

Playing limited time due to foul trouble, Miles went 2-for-12 from the field for 5 points, all of which came in the first half. He finished the game with zero free-throw attempts.

Carrying the load offensively for TCU was forward Emanuel Miller, who led the Frogs with 18 points. Guard Damion Baugh was right behind him with 14 points, 12 of which came in the second half.

Six players scored 5 or more points for the Frogs, but it was not enough to top four players in double figures for the Jayhawks.

The defeat means that TCU cannot finish Big 12 play with a winning record, as the team sits at 8-9 with one game left. TCU is still projected to be seeded in the NCAA tournament.

After finishing with just 2 points in Tuesday’s upset win, forward Eddie Lampkin got to work right away for TCU, scoring the Frogs’ first 4 points of the game.

While he was a physical presence for TCU all game, Lampkin ended up taking zero shots in the second half due to foul trouble, finishing with 7 points.

The ferocious crowd at Allen Fieldhouse seemed to get to TCU early, as a 7-0 lead by Kansas then put the Frogs down 12-4 five minutes into the game.

Agbaji, who went 4-for-17 from the floor in the teams’ first matchup, hit two of his first three attempts from behind the arc to lead the Jayhawks’ strong start.

TCU was not just going to be run over, though. Down 12 near the midway point of the half, the Frogs put together a 6-0 run to cut the deficit to 6.

Things got chippy as the first half winded down after Lampkin had some words for a pair of Kansas players following his second block of the game. The Jayhawks chirped back, resulting in a technical foul on Kansas.

The Frogs stayed composed, putting together a 9-2 run to pull back within 2 (28-26) on a layup by center Xavier Cork with 3:27 left in the first half.

TCU then outscored Kansas 9-7 for the rest of the half, sending the teams into the halftime locker room with a 35-35 tie.

“We’ve been in that position before. We fought back. We tied the game, and we thought it was 0-0,” Miller said. “New game. We just had to keep fighting.”

Miles had started the game 0-for-5 from the floor, but he made his final two shots of the first half to get the Frogs back in the game by the break.

Looking much more energized than it had to start the game, TCU kept momentum going in the second half. Just four minutes into the half, the Frogs popped off on a 7-0 run to take a 44-39 lead.

TCU went up by as much as 6 at one point, but Miles was called for three fouls in the first 10 minutes of the second half, giving him four on the game and forcing him to head to the bench.

“It’s hard. I want to be out there with my team, helping us get the win,” Miles said. “It’s hard. I got out of my rhythm while I was on the bench so long. I was missing shots that I usually make all of the time.”

That slowed the Frogs’ offense down for a stretch, and a 13-6 run by the Jayhawks gave Kansas back the lead (56-55) with nine minutes to play.

The teams then went back and forth, as the lead changed four more times over the next two minutes. Kansas was eventually able to put together a 4-0 run, and a fast break dunk by Agbaji put the Jayhawks up by 3 with 6:29 left.

The Frogs got back within 2, but a 7-0 run by Kansas opened the game open and extended TCU’s deficit to 8 with time ticking down.

The closest the Frogs would get from there was 4, as the Jayhawks went 3-for-4 from the free-throw line to end the game and hand TCU the loss.

“We just played three top-10 teams in a row and went 2-1,” Dixon said. “Anybody watching this game knows that we could’ve won this game very easily if a couple of things had gone our way.”

The Frogs outrebounded the Jayhawks 33-30, with Lampkin leading TCU with nine boards.

Still a sure seed in the upcoming NCAA tournament, TCU will finish its regular season this Saturday on the road against West Virginia. Tipoff is scheduled for 1 p.m.