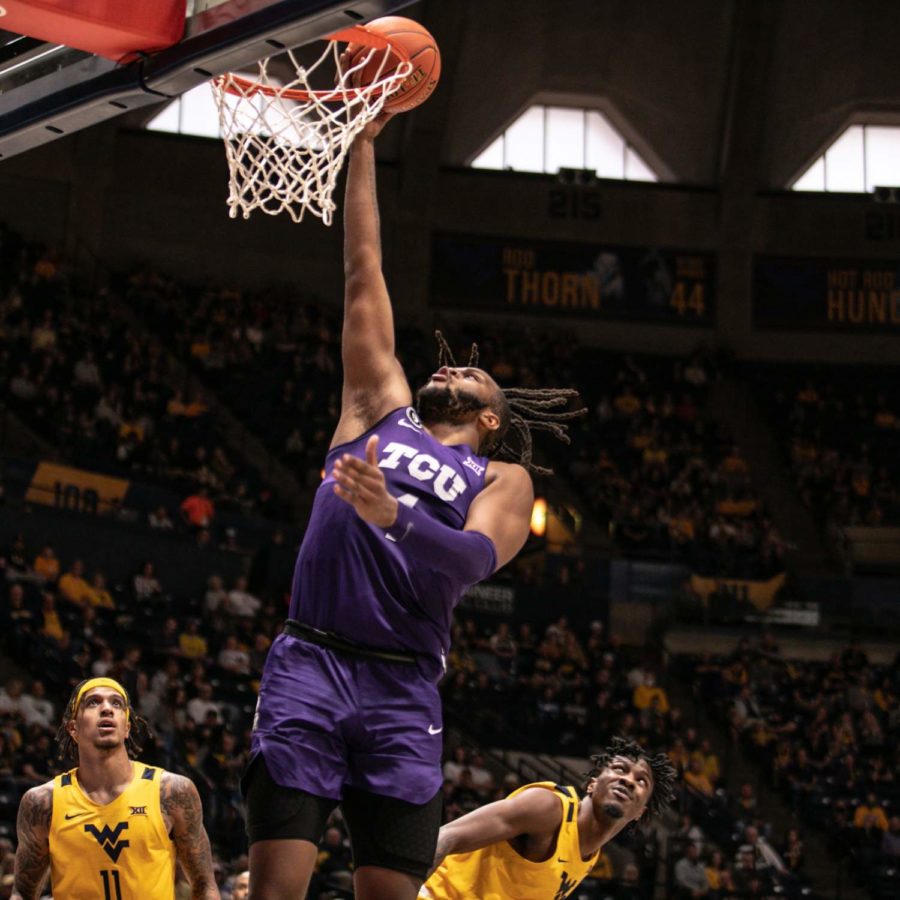 It was a rollercoaster of a seven days for TCU basketball.

Facing three-straight ranked teams and four total games in a span of seven days, the Frogs needed two wins to secure a spot in the NCAA tournament, and they got the first two.

After falling in a nail-biter in Lawrence, an exhausted TCU team limped into Morgantown on Saturday afternoon and just did not have enough to finish their regular season strong.

“Maybe we couldn’t handle all these games in a row down the stretch,” head coach Jamie Dixon said. “We came up with two losses on the road here, but that’s not an excuse. You’ve got to find a way. We’ve got to play better than that.”

The Frogs fell 70-64 to the West Virginia Mountaineers, ending their regular season at 19-11 overall and 8-10 in conference play.

TCU is now 0-10 all-time in Morgantown, and they miss out on an opportunity to finish at .500 in Big 12 play for just the second time ever.

On his senior day, guard Taz Sherman was an unstoppable force for West Virginia, scoring a game-high 25 points on 9-of-17 shooting.

Another thorn in TCU’s side was turnovers. They committed 18 in the loss, 10 of which came in the second half alone. Three different Frogs finished with four turnovers.

Having outrebounded their opponent in 23 of 30 games this year, TCU fell short in that area Saturday as well, losing the battle of the boards 33-29.

That result could not have been more different that the two teams’ first matchup. The Frogs outrebounded the Mountaineers 42-24 that day in a 77-67 win for TCU.

“They [West Virginia] were ahead from the start. I think they were ahead by seven at the first media timeout,” Dixon said of the rebound battle. “That’s all we talked about. I’m sure that’s all they talked about.”

Leading by six with over 6:27 to play, the Frogs then went over six minutes without a made field goal, allowing a 15-2 run by the Mountaineers during that span.

A garbage time three-pointer by guard Mike Miles with seven seconds left broke that streak for TCU and pulled them within four, but West Virginia was able to nail two game-clinching free throws two seconds later.

Miles led the Frogs with 17 points on 7-of-15 shooting. He finished 2-for-8 from behind-the-arc with only one assist.

Playing in their fourth game in a week’s span, TCU looked sluggish out of the gate. They missed their first three shots, and West Virginia made their first three, allowing the Mountaineers to start with a 6-0 lead.

Minutes later, Sherman drilled a wide open three, putting the Frogs down 10 (19-9) before the game had even reached the midway point of the first half.

TCU started the game just 4-for-13. Through the first eight minutes of the game, Sherman outscored the Frogs 10-9 by himself.

A nearly-three minute scoring drought by TCU had them down by as much as 11 with 8:37 left in the first half, by the Frogs immediately responded with a 4-0 run to get back within reach.

The Mountaineers got their lead back up to 10 three more times after that, but with 3:28 left in the half, Miles hit a tough and-1 layup to pull TCU within five.

That was part of an 8-0 run for the Frogs, which pulled them within two under a minute later. Across a span of over four minutes, West Virginia had missed 11-straight field goals, allowing TCU to get back in the game.

Hitting three of their last four shots of the half, the Mountaineers prevented the Frogs from ever taking the lead before halftime, and TCU went into the break with a 39-33 deficit.

Through the first 20 minutes, West Virginia pulled down 10 offensive rebounds to the only two for TCU.

“I was shocked by the two offensive rebounds we had in the first half,” Dixon said. “I thought that was telling as well.”

Sherman struck first in the second half on a jumper, but the Frogs then pulled all the way back to within one on an 8-0 run with just over 16 minutes to play.

Over the next five minutes, the Mountaineers’ lead fluctuated between seven and two, as TCU did enough to stay close but never enough to quite take the lead.

Finally, the Frogs went on an 8-0 run in a span of two minutes to take a 55-51 lead just past the halfway point of the second half.

TCU extended their lead up to six with time ticking down in the game, but things got interesting when West Virginia went on a 6-0 run to tie the game at 59 with 4:41 left.

That was in the middle of the Mountaineers’ big run to end the game, and the Frogs fell apart offensively down the stretch to put the nails in their own coffin.

“We got stops, so I think we should’ve had some opportunities to get to the basket better,” Dixon said. “Really, some of the passes were unexplainable. I mean, the turnovers were devastating and ignited them in transition. That’s what it is. You can come up with an excuse but nobody is going to buy it.”

Neither team shot the ball well on the day, with TCU shooting slightly better at 42% than the 39% of West Virginia.

The Frogs’ regular season is over, and they will now shift their attention to the postseason. TCU is projected as a five seed in the Big 12 tournament, and they are slated to face Texas next Thursday.