No. 16 TCU drops series to Kentucky as bullpen struggles 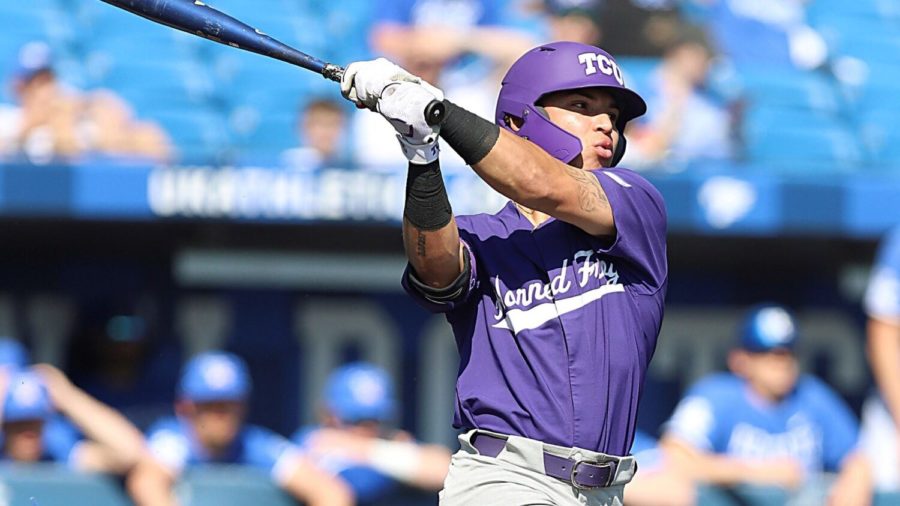 In a dramatic series, No. 16 TCU baseball dropped two of three in Lexington against the University of Kentucky.

Due to poor weather on Sunday, the Frogs and Wildcats played a doubleheader on Saturday.

Despite the disappointing weekend for the Frogs, center fielder Elijah Nunez shined, tallying nine hits in 13 at-bats. Nunez now leads the team with a .462 batting average.

The TCU pitching staff struggled to keep the Kentucky offense at bay, giving up 25 earned runs in the series.

In a back-and-forth affair with no shortage of offense, TCU fell to Kentucky 11-13 in the first game of the weekend.

The Wildcats added two more runs in the second inning, leading Krob to be pulled from the game.

The Wildcats then kept a four-run lead until the fifth inning, when it was the Frog offense’s turn to explode.

Nunez, who had four hits in the game, kicked off the inning with a single to center field. The Frogs then loaded the bases for Bishop, who drove in two with a single. Wild pitches, walks and an error gave the Frogs three more runs and an 8-7 lead.

Kentucky didn’t trail for long, retaking the lead with another big inning and scoring four runs with Connor Oliver on the bump. With both teams struggling to stop the offensive onslaughts, the game had turned into a shootout.

The Frogs countered the Wildcats with three runs of their own, tying the game at 11. A Nunez double, a single by right fielder Luke Boyers and a double by third baseman Brayden Taylor sparked the flame.

In the eighth, the Wildcats took the lead for the third time in the ballgame, scoring twice.

The Frogs failed to come back, losing the game in heartbreaking fashion.

In the first of the double header, TCU lost to Kentucky 5-1. This was the Frogs’ first back-to-back loss this season.

TCU trailed the entire game, only scoring one run in the fifth off a Nunez single.

Starting pitcher Riley Cornelio was solid for the most part, giving up two runs and keeping the Frogs within striking distance through five. He then gave up a three-run home run that gave Kentucky a sizable lead, which it kept the rest of the game.

Due to the double header on deck, the game ended after the seventh inning. TCU lost the game 5-1, resulting in its first series loss of the season.

This was the only time this season that the Frogs scored less than four runs.

TCU avoided the sweep, winning the final game of the series 12-8 after blowing a seven-run lead.

Less than an hour after the second game concluded, the final game commenced.

TCU quickly tripled its offensive production from game one, scoring three in the first. A pair of singles from Boyers and Taylor, a walk from Bishop and a wild pitch brought home the first run. Shortstop Tommy Sacco brought home the next two with a double.

After two stellar innings from starting pitcher Brett Walker, TCU scored once again in the third off a Rodgers sacrifice fly.

The Frogs continued to add to the lead bit by bit, scoring one run in the fourth, fifth and sixth.

During this stretch, Nunez tripled to set up a Boyers sacrifice to continue his spectacular performance in the series.

Walker, who held the Wildcats scoreless through six with eight strikeouts, was replaced by relief pitcher Augie Mihlbauer after giving up a walk and a single. Mihlbauer gave up a grand slam, trimming the lead to three runs and giving two earned runs to Walker.

Relief pitcher Caleb Bolden took over and gave up a two-run home run. He then struck out two batters, bringing a disastrous inning for TCU to an end.

Kentucky tied the game in the eighth after a fielding error from Taylor led to their seventh unanswered run.

Although the Frogs blew a massive lead, they stayed composed and put together a phenomenal final inning with their backs against the wall.

Doubles from Sacco and designated hitter Porter Brown and singles from Boyers and Taylor led the Frogs to a five-run ninth inning.

Closing pitcher River Ridings gave up his first earned run of the year after a solo shot. This was not enough to catch the Frogs as they avoided the sweep, winning the ballgame 12-8.

The aftermath of the weekend places TCU at 8-3 on the season and will likely result in the Frogs falling in the Division I Baseball Top 25 rankings.

TCU will look to bounce back in Louisville on Tuesday at 11 a.m.