TCU basketball heading into Big 12 tournament with “no excuses” 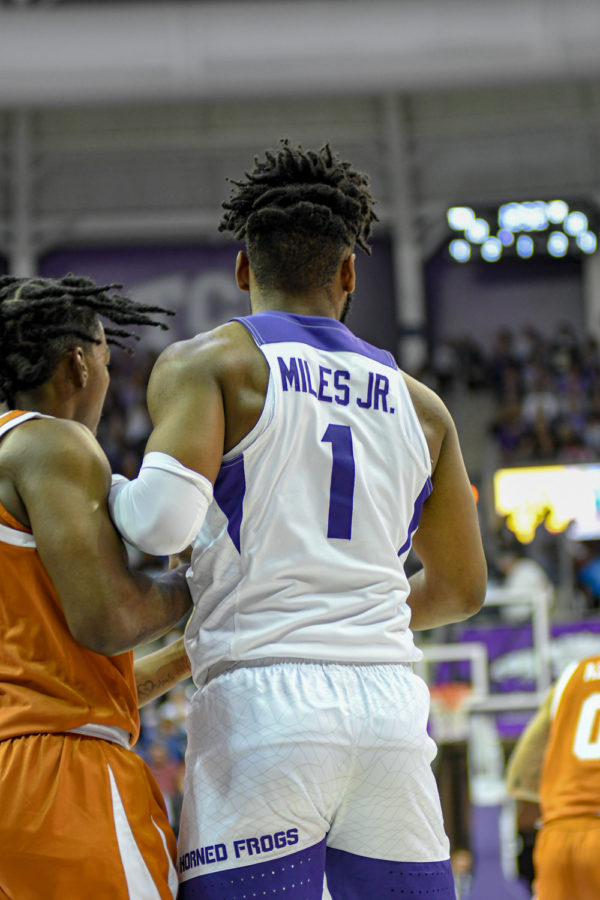 A team that has gone through as much as TCU basketball has in the last 10 days has a right to make excuses.

The Frogs played four games in seven days, with the first three of them coming against teams ranked in the top 10 nationally.

They played back-to-back top 10 opponents in Fort Worth (Texas Tech and Kansas), travelled to Lawrence to play Kansas for a second time, then flew straight to Morgantown to end their regular season.

Through all of that, the Frogs emerged 2-2, cementing themselves in the NCAA tournament but leaving questions as to how high their ceiling is as a team.

You won’t ever hear excuses from TCU, though.

“They’re a team that’s worked. They’ve gotten better. They’ve stepped up and didn’t once use an excuse,” head coach Jamie Dixon said of his team. “I know everybody was writing, talking about the different things and the games that we had to play.”

This is nothing new for the Frogs, as powering through adversity has been their mantra since day one.

They had to find chemistry on a roster that sported 10 new faces from last season. They lost two guards to injury before nonconference play even started. They suffered a COVID-19 layoff leading up to a matchup with No. 1 Baylor.

“We got in here June 1st, and we went to work. We went 5-on-5. We went live. We put stuff in. We adjusted,” Dixon said. “Then, we lost guys, and we re-adjusted. It’s been a battle. Then, they go through COVID-19 again and lose practices and have to start out mid-season and then play a stretch that no one else has played.”

Oh yea, and their leading scorer, Mike Miles, has dealt with injuries to both of his wrists for the entirety of conference play.

But you still won’t hear an excuse.

“They still hurt, everyone asks about them. I try to play it off like it doesn’t hurt, but they do,” Miles said. “They still affect me. That’s not an excuse. I’m still trying to go out there and helping my team win games.”

TCU now enters the Big 12 tournament as the five seed (tied for a program record), but they will certainly need Miles to help them win games moving forward, as their first matchup presents them with a task they have yet to conquer this season–beating state-rival Texas.

Texas enters the Big 12 tournament as the four seed, sitting as the No. 22 team in the country and 21-10 overall.

Finishing 10-8 in conference play, the Longhorns’ season was highlighted by wins over Tennessee (Big 12/SEC Challenge) and Kansas, both of which came near the beginning of February.

This included guard Marcus Carr, who was considered the top transfer in the portal and averaged 19.4 points per game for Minnesota last season. Before that, he spent a year playing at Pittsburgh.

After a slow start to the season, Carr turned up the heat in conference play, scoring in double figures 13 times and securing All-Big 12 Third Team honors.

Against the Frogs this year, the point guard was deadly, averaging 15 points per game on nearly 50% shooting.

Another key transfer for the Longhorns was forward Timmy Allen from Utah. He averaged 12 points and 6.5 rebounds this year on his way to making the All-Big 12 Second Team.

Despite bringing in new talent prior to the season, Texas still stands out for the seasoned depth that is featured on their roster.

Guard Andrew Jones is in his sixth year with the program, earning extended time due to health reasons and COVID-19 eligibility.

The Irving, Texas, native averaged just under 11 points per game this year (All-Big 12 Honorable Mention), and one of his best games of the season came in a 21-point performance against the Frogs in Austin two weeks ago.

“I was just going through their [Texas] roster, and I mean, [Andrew] Jones–six years! He’s in his sixth year. [Jase] Febres–fifth year playing,” Dixon said. “Marcus Carr was at Pitt, so I was following him back then. He’s in year five. The familiarity with these guys, I think adds more to it than even a neutral court.”

Another key veteran for the Longhorns is fourth-year guard Courtney Ramey (All-Big 12 Honorable Mention), who averages 9.3 points per game and is Texas’ best on-ball defender.

On Saturday, Ramey held Big 12 Player of the Year Ochai Agbaji to 1-of-11 shooting and just eight points in a nail-biter in Lawrence.

Feeding off of Ramey’s energy, Texas prides themselves on their defense. They lead the Big 12 in both scoring defense (59.45 points per game) and turnover margin (+3.35 per game).

Texas looked strong as ever defensively in their first matchup of the season with TCU, holding the Frogs to an abysmal 36% shooting as a team in what became a blowout by halftime.

In the second matchup, though TCU improved their shooting to 53% as a team, they were plagued by 17 turnovers and would fall apart late in a 75-66 win for the Longhorns.

“Obviously, a game in the second half where we didn’t get it done, and we hopefully are a better team since then,” Dixon said of the loss for TCU.

Though Texas has a plethora of guys who can score the ball, their main standout on offense is free throw shooting. They lead the Big 12 with an impressive 75% from the charity stripe as a team. 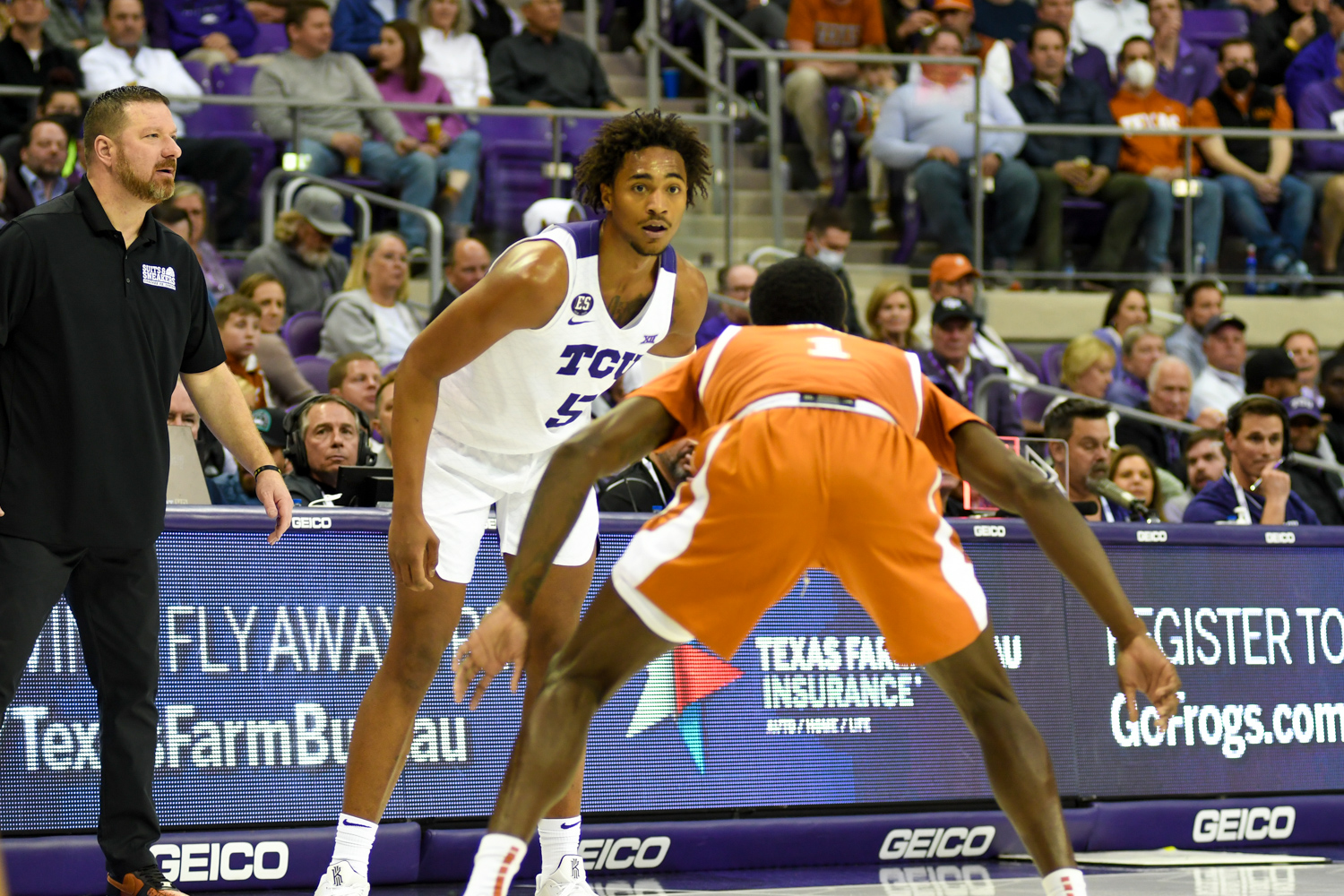 Not only have the Frogs failed to win against the Longhorns this year, but they have lost their last seven matchups with Texas.

To turn the tide of the series back in their favor, the Frogs will need to build upon several inefficiencies that they have shown at times throughout the course of the season.

According to Dixon, a primary focus will be for TCU to win the rebound battle. This would be nothing new for the Frogs, as they’ve accomplished this goal in all but five games this season.

Of those five, though, two came in their two losses to Texas. In Fort Worth, the Longhorns won the battle of the boards 41-31; while in Austin, they won 30-28.

“Certainly, we’ve addressed that [rebounding]. We said that, I think, right after we realized we were going to play Texas. I think we kind of knew we were going to play Texas. It was pretty much a foregone conclusion going into Saturday’s game,” Dixon said. “We know what we’ve got to do, and that’s always our emphasis. It remains, and we know the numbers and we’re well aware.”

The only Frog to finish with five or more boards in either of those games was forward Eddie Lampkin, who combined for 15 rebounds in the two losses.

TCU leads the Big 12 in rebounds per game (38.87), with forward Emanuel Miller leading the way with 6.2 per game. Lampkin is right behind him with 6.0 per game.

The Frogs also lead the conference in offensive rebounds per game (13), though they averaged just 8.0 per game in the losses to Texas.

Improvement on the glass, especially on the offensive end, will give TCU more opportunities to score against a potent Texas defense.

“Every game we’ve won this season is because we’ve outrebounded our opponent,” forward Chuck O’Bannon said. “We lost to Texas twice this season, because they outrebounded us both times. We know if we want to win this game, it’s more than making shots. We need to rebound and defend at a high level.”

Another key for the Frogs will be to keep pace with the Longhorns. In both losses to Texas, TCU gave up massive runs, practically watching the game slip away in a span of minutes.

During both games, standout individual performances sparked the runs for the Longhorns. In the first game, Allen scored 12 points in the first half alone, leading Texas on a 33-13 run that put them up by 20 at the half.

In the second contest, Carr and Jones combined for 31 second half points, headlining a 37-18 run by the Longhorns to end the game.

Forcing Texas into a more-balanced scoring effort will work to TCU’s favor, preventing any of the Longhorns’ star scorers from taking the game over.

Lastly, the Frogs will both need to get to the free throw line and shoot a high percentage from the line.

The two team’s first clash saw TCU shoot 21 free throws and make only 12 (57%). In the second matchup, the Frogs only had 11 free throw attempts, making an efficient eight of them (73%).

Whether or not TCU can flip the script against Texas will be made clear early Thursday, as the Frogs tip off with the Longhorns at 11:30 a.m in Kansas City on ESPN2.

“We obviously didn’t end the conference how we wanted to, but it’s a new season,” Miles said. “Every one is 0-0. Everyone is starting fresh in this conference, and we’re going into Kansas City trying to play our best basketball.”