Frogs show Texas “what TCU basketball is about” in comeback win 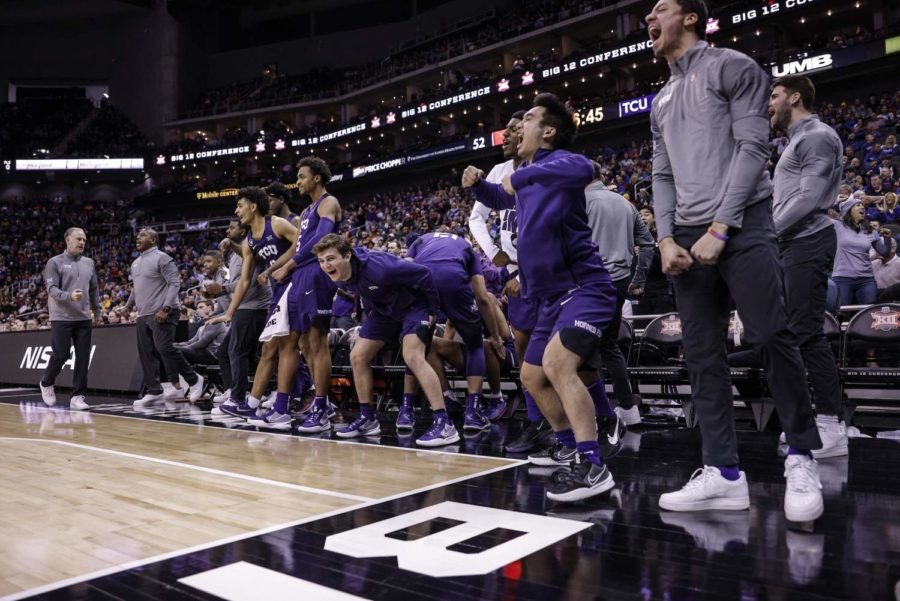 The TCU basketball bench erupts during the Frogs' 20-point comeback win over No. 22 Texas in the Big 12 tournament quarterfinals in Kansas City, Missouri, on March 10, 2022. (Photo courtesy of gofrogs.com)

Damion Baugh told Eddie Lampkin that he was going to be open.

With 42 seconds to play and the game tied at 60, Baugh caught the inbounds pass, beat his defender, and forced Texas forward Christian Bishop to help onto him.

Just as predicted, that left Lampkin alone under the basket, and Baugh found him for what would become the game-winning layup for TCU in a 20-point comeback victory.

“He [Baugh] told me at the beginning, ‘Bro, you’re going to be wide open, just seal.’ They were going to try to get it to me regardless,” Lampkin said. “DB was telling Fran [Farabello] to look in. I was going to try to seal him. DB got the ball, my man went up and he just dropped it off to me.”

Wow. #TCU takes a 62-60 lead over Texas with 40 sec left on a monster layup from @EddieLampkin25. pic.twitter.com/ZMqywS6adj

Spurred by the perfectly-executed score, the Frogs finished the game on a 5-0 run, winning the Big 12 quarterfinals 65-60 over the Longhorns and completing their greatest comeback under head coach Jamie Dixon.

Previously, TCU’s greatest deficit to overcome in Dixon’s six-year tenure in Fort Worth was a 17-point comeback against Washington in 2016.

Lampkin was all over the floor for TCU, finishing with 10 points, 9 rebounds, 3 steals and 2 blocks.

The 20-point lead for Texas came with 45 seconds left in the first half. A layup by guard Mike Miles seconds later that ended a five-minute span for TCU without a field goal made it 40-22 in favor of the Longhorns at halftime.

“I thought this team showed grit. I thought we fought together,” forward Emanuel Miller said. “I thought, as a group, we showed what TCU basketball is about.”

Earlier this week, Dixon and several Frogs emphasized TCU’s need to win the rebound battle in this game after losing it in both regular season matchups with Texas.

Led by a game-high 12 rebounds from Miller, the Frogs won the battle of the boards 38-31 in their come-from-behind win.

Following their longest break in over a month (five days), TCU seemed to have energy early in the first half, taking a 12-7 lead on a 10-0 run before the midway point of the half.

“I liked how we played early,” Dixon said. “I thought we were the more aggressive team. It was a close game. It was back-and-forth.”

The Frogs then fell dead flat for the rest of the half.

While Texas could not miss if they tried, TCU seemed to be shooting on a rim with a lid on it, missing 11 of their next 15 field goal attempts.

Behind an impressive 65% shooting in the first 20 minutes, Texas outscored the Frogs 33-10 in the last 11 minutes of the first half.

“We missed some shots, some lay-ups, some open threes,” Dixon said. “We have a tendency to let that take away from our transition defense and what we’re doing in the half court on defense.”

To that point, Longhorn forward Timmy Allen had been nearly-perfect, going 4-for-5 from the field for a game-high 10 points.

Meanwhile, Miles was 1-for-8, and his last second layup had prevented him from going scoreless in the second half. Regardless, he said postgame that the Frogs never lost sight of their goal of winning the game.

“The message [at halftime] was to stay confident, not to get down on ourselves,” Miles said. “We knew it wasn’t going to be easy coming back from an 18-point lead, but we stayed together and ultimately came back.”

Allen went 2-for-6 in the second half with six points.

From the beginning of the second half, it was clear that a different TCU team was on the floor. In the first three minutes out of the break, the Frogs went on an 8-2 run to cut it to 12.

Texas started to shoot poorly, allowing TCU to continue their run. Through the first 5:31 of the second half, five Frogs had scored in the new half, and the Longhorns’ lead was down to nine.

A nonfactor to that point, Miles then became an unstoppable force for TCU. The sophomore went on a personal 8-2 run in a span of just over a minute to pull the Frogs within seven at the midway point of the half.

His own body then slowed the guard down, as Miles was then helped off the floor and into the locker room after sustaining an ankle injury.

That did not cease TCU’s momentum, though. They then scored five-straight points following Miles’ injury, taking their first lead in nearly 24 minutes of play on an and-1 layup by Miller with 6:45 to play.

Miller said postgame that it was key for the Frogs to stay poised with their leading scorer out of the game.

“Being down 18 at half in Division 1 basketball is not easy to come back from, let alone to do that in the Big 12,” Miller said. “I thought this team showed grit. I thought we fought together.”

Miles was eventually able to return to the game. He appeared limited due to his ankle and did not score again for the rest of the contest.

With 2:41 remaining, Texas guard Courtney Ramey drilled a three to put the Longhorns up by four, but TCU responded immediately with a dunk by Lampkin on a beautiful dish from Miles.

Lampkin would score six of TCU’s final 10 points, energizing the Frogs enough to see another day in Kansas City.

“I bring the most energy on the team. If I’m turnt up, they’re turnt up,” Lampkin said. “I feel like every time I have to turn up, bring the energy, they’re going to bring the same.”

Miles finished with 13 points, 4 rebounds and 3 assists. He said postgame that he “for sure” plans to play in the semifinals, despite his injury.

TCU had held Texas to an abysmal 23% shooting in the second half. After combining for 40 points when the two teams met in Austin, guards Marcus Carr and Andrew Jones combined for just 12 points on Thursday.

Moving into the semifinals, TCU will play top seed Kansas for the third time in 10 days on Friday. Tip-off is scheduled for 7 p.m. on ESPN2.

“There’s a lot of confidence,” Miles said. “Whoever we play tomorrow just beat us a week ago, honestly; but we’re going to prepare, and we’re going to get ready.”