Even after loss, TCU basketball has the respect of Kansas 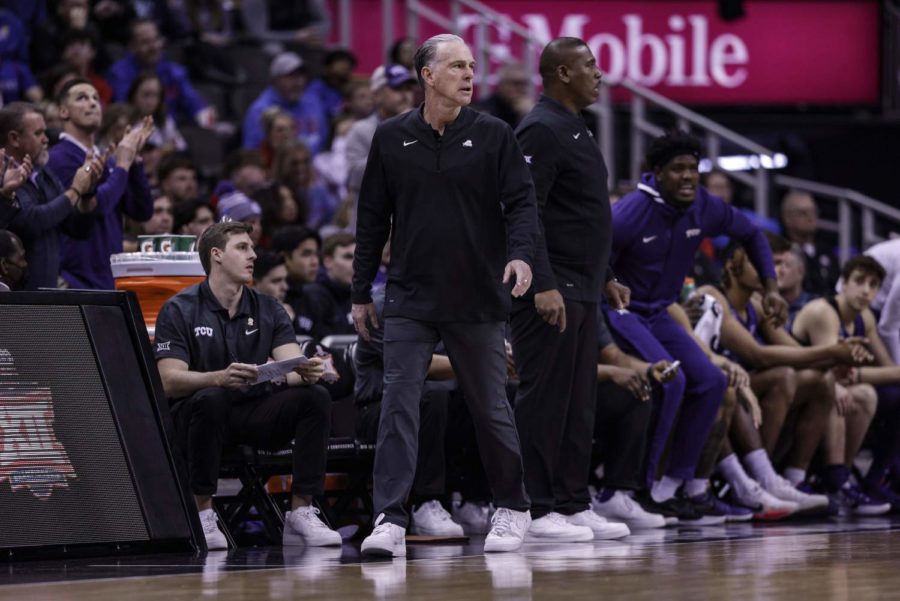 TCU head coach Jamie Dixon surveys the court during TCU's 75-62 loss to No. 6 Kansas in the Big 12 tournament semifinals in Kansas City, Missouri, on March 11, 2022. (Photo courtesy of gofrogs.com)

Bill Self believes TCU basketball is the real deal in 2022.

“I think TCU can beat just about anybody if they play well,” Self said. “I love that team. I do.”

Thirty minutes earlier, the Frogs had fallen to Self’s No. 6 Jayhawks 75-62 in the Big 12 tournament semifinals, but Self’s conviction was adamant when talking about TCU.

It was not just your typical opposing coach banter.

That comes at no surprise though, as TCU had given Kansas all that they could handle twice already in the last 10 days. The Frogs bested the Jayhawks in Fort Worth last Tuesday before falling in a four-point nail-biter in Lawrence two days later.

That respect Self displayed trickled down to his players too, as Kansas guard Ochai Agbaji had high praise for TCU guard Mike Miles postgame.

“Their guards, 1-4, are really athletic, but he is the pack leader for them,” Agbaji said. “He is a really good scorer, can score on all three levels, really strong. He’s a really good guard, and I respect his game.”

Even in the wake of a loss, the respect of the Big 12 Player of the Year was meaningful to Miles.

“It means a lot that he respects me,” Miles said. “He’s far-and-away the best player in the conference this year. Obviously, he won the award, first-round draft pick, so that means a lot.”

The efficiency of their leader had led Kansas to 50% shooting as a team, which, paired with 18 turnovers by the Frogs, put TCU down by as much as 22 in the game.

Another guy who the Frogs struggled to stop was forward Mitch Lightfoot, who set a career-high with 15 points. The sixth-year senior won the battle between him and TCU forward Eddie Lampkin, who had eight points on 3-of-8 shooting.

“He’s huge for them, because I think he doesn’t play a lot of minutes,” head coach Jamie Dixon said. “But, when he does, he produces. He’s produced against us over time.”

Though he led TCU with nine assists, guard Damion Baugh struggled to handle pressure, committing seven turnovers. The Jayhawks turned the ball over just seven times as a team.

A highlight for the Frogs on the offensive end was forward Chuck O’Bannon. He led the team with 15 points on 75% shooting from the floor in his best game in over a month.

“I have been struggling the past few games making shots, so tonight, it felt good for it to drop a few times,” O’Bannon said.

Even with the loss, TCU is still considered a lock for the NCAA tournament after winning 20 games and setting a program record with seven quad 1 wins and five ranked wins.

Attempting to prevent another first half deficit, the Frogs got to work right away in the first half, hitting their first two shots for a quick 4-0 lead.

Four early turnovers then hurt TCU as they tried to keep momentum up, and Kansas went on an 10-0 run to go up 18-9 after nearly eight minutes had passed.

After starting 0-for-7 in the quarterfinals, Miles made his presence known early. The guard hit a contested three with Kansas students jeering at him before motioning them to “be quiet” while running back down the floor.

“I love having fans in the crowd, everyone being there,” Miles said. “It’s a great crowd to play in front of.”

That pulled TCU within six, and they were as close as five at the midway point in the half.

The presence of forward David McCormack then began to wear on the Frogs. He forced fouls on back-to-back possessions, hitting three-straight free throws to extend TCU’s deficit to 10 (26-16).

Things continued to go downhill for the Frogs from there. Over a nearly-nine minute span late in the half, TCU was outscored 23-9, putting them down by 19.

The Frogs seemed to have fixed their offensive woes in the early moments of the second half, scoring on their first six possessions.

Continued efficiency on the part of the Jayhawks partially mitigated the TCU run, but the Frogs were able to pull within eight with just over 16 minutes to play.

Three minutes later, the TCU deficit was back to 16, as Kansas had stayed poised and put together an 8-0 run to blow the game back open.

Much like the first half, the Frogs saw any effort to get back in the game matched by the Jayhawks. TCU got back within 15 with nine minutes to play, but a 7-2 run by Kansas then made it a 20-point game.

“[It’s] very deflating, because we were focused on cutting the lead that they had, and we couldn’t get it,” O’Bannon said. “It was frustrating. There were times that I felt we ran out of gas.”

The lead for the Jayhawks got as high as 22 with 4:28 to play, all-but shutting the door on a second-straight magical comeback for the Frogs.

TCU never fully gave up, going on a 9-0 run late to pull within 13 with a minute and a half left, but it was too little, too late.

“[I’m] proud of our team, and the group we had in there at the end fought,” Dixon said. “I’m proud of what they’ve done.”

The Frogs did win the rebound battle 37-26 in the loss. Baugh and O’Bannon tied for the team lead in that category with seven boards apiece.

With the exception of O’Bannon and Miles, no other Frogs scored more than eight points.

Selection Sunday for the NCAA tournament is this Sunday, March 13, at 5 p.m on CBS.