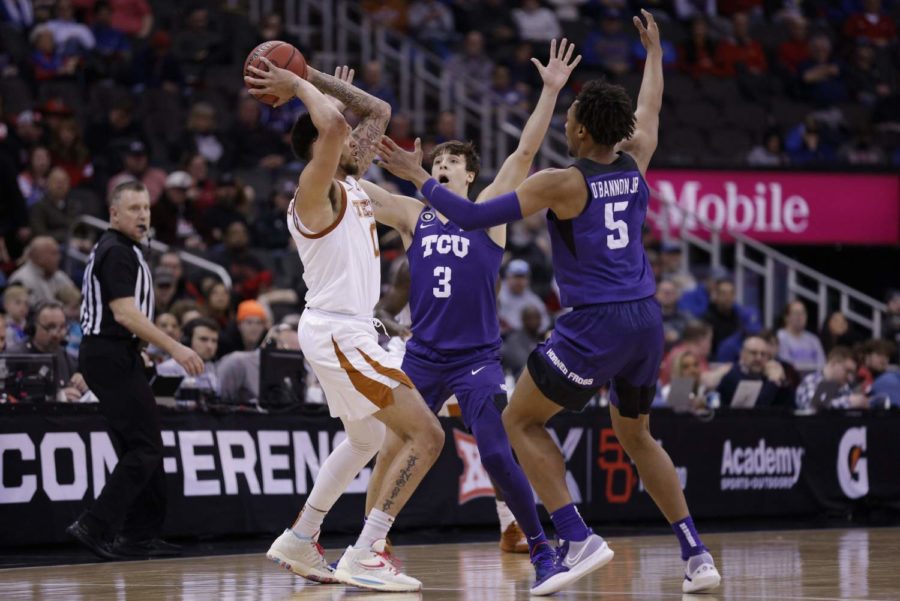 TCU's Francisco Farabello (3) and Chuck O'Bannon (5) defend Timmy Allen (0) of Texas in the Frogs' comeback win over the Longhorns in the Big 12 tournament quarterfinals on March 10, 2022. (Photo courtesy of gofrogs.com)

With less than a week before they make just their second NCAA tournament appearance since 1998, TCU basketball continues to add to a resume that is unlike any other in program history.

Before Thursday, the Frogs had never come back from a deficit larger than 17 points to win under head coach Jamie Dixon, making their 20-point comeback victory over the Longhorns a record during his six-year tenure.

Read more: Frogs show Texas what “TCU basketball is about” in comeback win

It is safe to assume that it was one of, if not the, greatest comebacks in TCU basketball history, but TCU Athletics reported that their files on deficits overcome only go back to the 2013-2014 season.

The win was also the second-greatest halftime deficit (18 points) overcome in the history of the Big 12 tournament.

Ending a seven-game losing streak to Texas, the victory also means more in the bigger picture for TCU. It was their eighth quad 1 win and fifth ranked win this season, both of which are program records.

With unprecedented success comes respect, and the Frogs are beginning to garner the attention of people around the sports world.

This was especially present on Twitter following TCU’s win over Texas, as several professional Frogs and other sports figures showed their support for the come-from-behind win.

The winningest former Frog as of late, Tom Hoge, the 2022 AT&T Pebble Beach Pro-Am Champion, showed love for TCU amidst his play at THE PLAYERS Championship.

66 in round 1 of @THEPLAYERSChamp and a @TCUBasketball comeback win over Texas! A pretty good day if you ask me!! pic.twitter.com/mi3hYXdNJS

In the football world, Chicago Bears quarterback Andy Dalton, who led TCU football to a Rose Bowl victory in 2011, gave the Frogs a shoutout.

A former teammate of Dalton’s at TCU, wide receiver Josh Boyce, who spent several seasons in the NFL for three different teams, showed his support for the win as well.

On the basketball side of things, two members of the last TCU team to make the Big Dance (2017-2018) made it known they felt after the Frogs upset the Longhorns.

All you TCU haters quiet now, even our fans would challenge me about this team. I’m not gonna fight with you guys, we are family but don’t question my basketball IQ again 😂 #GOFROGS 🐸💪🏽🏀 DANCING! 🕺

Brandon Parrish (2013-2017) was a third former TCU basketball member who shouted the Frogs out. He currently plays professionally in Hungary for the OSE Lions.

Outside of the TCU alumni base, the Frogs also garnered some attention from Dan Katz, Kelly Stewart and Megan Nunez of Barstool Sports, three of the most famous sports betting personalities on the internet.

TCU is so scrappy. I love them so much

Perhaps less surprising was the hype that TCU received from CBS Sports Network college basketball insider Jon Rothstein following the big win, as Rothstein has been high on the Frogs all season.

TCU is the type of 8 or 9 seed that could wind up in the Sweet 16. The closest thing that Jamie Dixon has had to Pitt since he left Pitt.

As early as Friday, TCU will have a chance to take two more steps forward, as they attempt to win a season series with Kansas and make the Big 12 tournament finals for the first time in program history.

Tip-off with the top seed Jayhawks is scheduled for 6 p.m. on ESPN2.