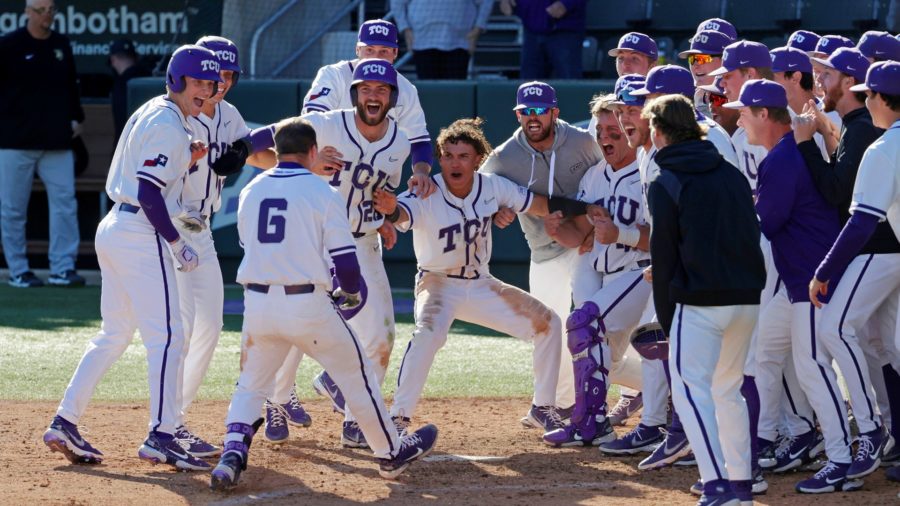 Following a disappointing road trip, No. 21 TCU bounced back with a vengeance, sweeping Army in a dramatic series.

Although TCU trailed Army for the majority of the weekend, they showed resilience and were able to rally late. Magic was in the air at Lupton stadium, as the Frogs won both games on Saturday in walkoff fashion.

Regardless of the outcome, one thing about this season for the Frogs has been evident: there is no quit in this team.

Right fielder Luke Boyers was the hero for TCU in game one, hitting a three run walk-off home run to defeat Army 6-4.

Although his pitching was effective, starter Riley Cornelio struggled at holding runners to their bases, allowing a run to score due to a throwing error in consecutive innings.

In the 3rd inning, Army added to their lead with a two run home run.

Catcher Kurtis Byrne responded with a three run home run, his first of the year, putting the Frogs on the board and cutting the lead to one.

Cornelio, who threw 103 pitches total, was pulled after the 5th inning. He gave up two earned runs, three hits, and struck out seven.

Starting in the 4th and continuing through the 8th, both teams remained scoreless. Relief pitcher Cohen Fesser pitched four innings for the Frogs, allowing two hits. Left fielder Logan Maxwell was able to save a run with a diving catch in the 7th.

The Frogs, down two runs to the Black Knights in the 9th, needed some Lupton magic to win the ballgame.

First baseman David Bishop sparked the rally with a single and was able to advance to scoring position after a walk by second baseman Gray Rodgers.

Army was able to record consecutive outs, sending Boyers to the plate for the Frogs, who needed a miracle to avoid the loss.

A miracle is what TCU got, as Boyers turned on the second pitch of the at bat, launching a deep walk off home run over the left field fence.

The team celebrated with Boyers, mobbing him at the plate as the Frogs defeated the Black Knights 6-4.

In extra innings, Nunez walked in a run to give the Frogs their second walk-off win of the day as they defeated the Black Knights 6-5.

A Bishop solo shot in the 3rd was the sole source of offense for the Frogs for the majority of the game.

After the top of the 4th, TCU trailed Army 5-1 until the offense came alive in the 8th, scoring four runs and tying the game.

Nunez started the rally with a double. A walk from third baseman Brayden Taylor and a Bishop single brought home the first run.

Rodgers doubled to left center, bringing home Taylor and bringing the go ahead run to the plate. Byrne was able to bring home another run with a groundout to the pitcher.

The Frogs were able to tie the game after a fielding error, eliminating the Black Knight’s four run lead. Both teams failed to score after, sending the game to extra innings.

The TCU pitching staff allowed zero runs after the 4th, keeping the Frogs within striking distance.

After the Frogs loaded the bases in the 10th, Nunez was able to “walk it like [he] talks it” as his walk up music suggests. He brought home the winning run to the plate with a bases loaded walk, giving TCU their second win of the series.

Highlighted by multi-hit performances by Taylor and Sacco, TCU cruised to a 5-2 victory, securing the sweep against Army.

Starting pitcher Austin Krob gave up four hits in the first, allowing Army to take a 2-0 lead and strike first for the third time this series.

In the 2nd, Army walked in two runs and then gave up the lead after a Bishop sacrifice fly.

Krob was able to settle down after the 1st, pitching four consecutive scoreless innings and striking out six.

In the 5th, Taylor opened the bottom half of the inning with a single and stole second, setting himself up nicely to score later after two sacrifices moved him around.

Neither team scored until Maxwell brought home Sacco with a single in the 8th, giving the Frogs a three run lead.

Relief pitcher Luke Savage threw three scoreless innings and relief pitcher Marcelo Perez finished the game in the 9th for the Frogs as they defeated the Black Knights to secure the sweep.

The TCU bullpen gave up zero earned runs throughout the entirety of the series, which impressed head coach Kirk Saarloos.

“We gotta play better baseball overall, but I was really proud…of the bullpen coming out and throwing zeros,” Saarloos said. “I think they know that they are never out of a ballgame.”

Savage said that the bullpen, which struggled early in the season, was due for some success.

“We’ve been working everyday,” said Savage. “It’s good to get some results… I think this team is different. As we’ve seen, we fight in every game, no matter what the score is.”

TCU, with starting pitcher Cam Brown likely on the mound, will face Texas A&M – Corpus Christi on Tuesday at 6 p.m. at Lupton Stadium.