Taylor and Bishop hit back to back home runs as No. 21 TCU wins fourth straight 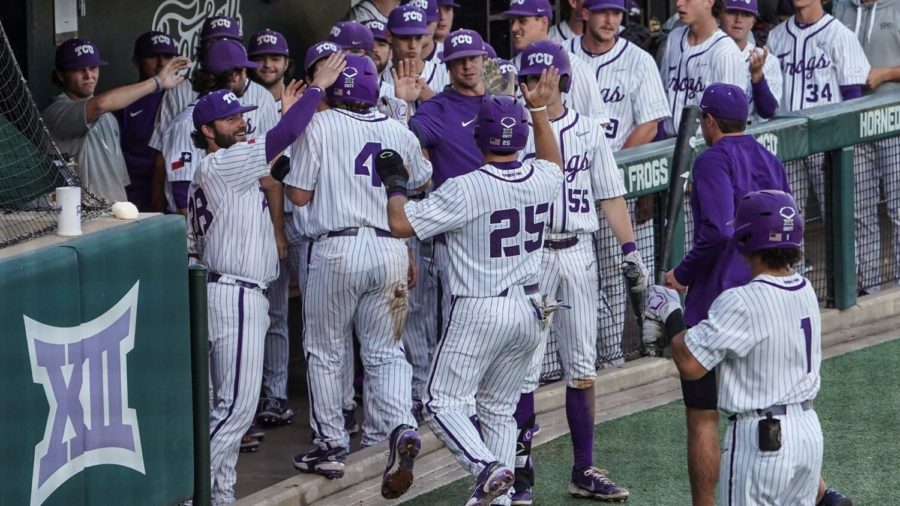 Starting pitcher Cam Brown struggled in the 1st inning, loading the bases with no outs. He settled down and escaped the inning with minimal damage, giving up a single run.

In the bottom of the 1st, First baseman David Bishop was able to tie the game for the Frogs with a sacrifice fly.

Relief pitcher Connor Oliver replaced Brown and gave up a leadoff double. After the runner was moved to third, a wild pitch brought home a run.

Oliver continued to struggle, giving up a single and a walk. Left fielder Josh Caraway then hit a no-doubter to left field, giving Texas A&M – Corpus Christi a 5-1 lead.

To start the bottom 2nd, Shortstop Tommy Sacco hit a double to left-center, and catcher Kurtis Byrne followed it with a walk. Right fielder Luke Boyers reached safely with a base hit and loaded the bases for left fielder Logan Maxwell, who drove home two runs with a single.

Designated hitter Garrison Berkley brought home another run with a sacrifice fly to cut the lead down to one.

At the bottom of the third, the lights at Lupton turned off, leading to a twenty-minute delay in the game. After the break, Sacco tied the game, bringing home a run with a grounder.

TCU took the lead in the 4th powered by Maxwell and Bishop base hits.

Texas A&M – Corpus Christi scored their final run of the ballgame in the top of the 5th.

TCU then loaded the bases for Mason Speaker, who was pinch-hitting for Owen Blackledge. Speaker hit a rocket to right-center field, clearing the bases.

Sam Thompson was inserted into the game as a pinch-runner for Speaker. Before the pitcher completed his windup, Thompson bolted for third. He dove into the base but did not continue to move forward. Instead, his face planted into the dirt and his legs came all the way to his head in a maneuver that looked straight out of a gymnastics routine. After an errant throw, Thompson was still able to score on the play, giving the Frogs the lead.

After the Frogs ended an inning scoreless for the first time of the night, they bounced back with a four-run 7th that was highlighted by Bishop and Taylor launching back-to-back home runs.

A young kid in the stands delighted the Lupton Crowd with a “Let’s go Frogs!” chant that carried throughout the stadium. When Taylor came up to the plate he yelled, “Hey Brayden, hit another jack!”

In the 8th, Bishop ended the game early with a single, driving in two and giving the Frogs an 11 run lead.

TCU, who is now 12-4 on the year, will travel to Waco to take on the Baylor Bears in the first Big 12 weekend series of the year. The first pitch will be at 6:30 p.m. this Friday.