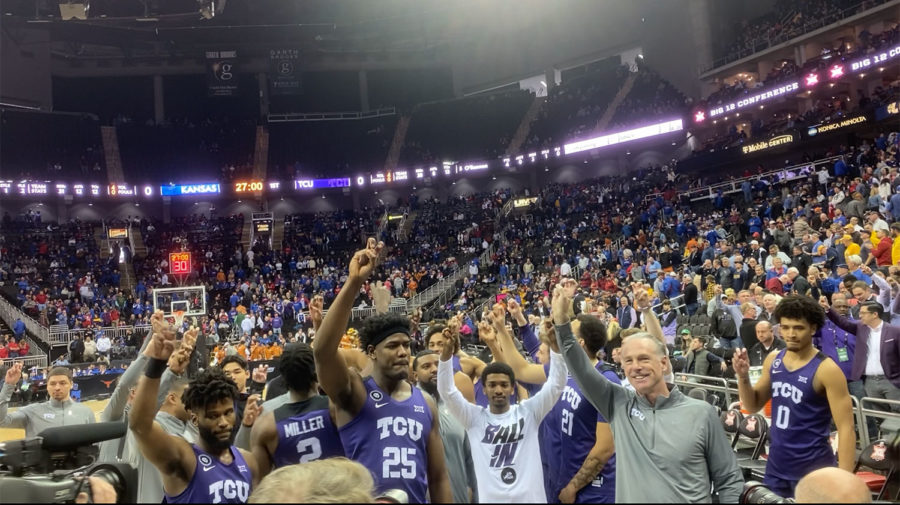 By Tristen Smith and Kyla Vogel

For the first time since 2018, the Horned Frogs are back in the Big Dance.

The Frogs’ fate was in limbo going into the last week of the regular season, but back-to-back upset wins versus top-ten teams and an improbable comeback over Texas in the Phillips 66 Big 12 Championship sealed the deal.

After Texas led by 18 points at half-time, TCU surged back and defeated them 65-60 in the quarterfinals – the biggest come-from-behind victory since Head Coach Jamie Dixon took the helm.

Before the Frogs battled the Longhorns, TCU fans traveling to Kansas City had to face wintry conditions, including icy roads and over seven inches of snowfall in the city.

Regardless, the arena was packed. Cheers erupted from Kansas, Texas Tech and West Virginia spectators as the Frogs closed the gap.

“It was a game of a lifetime,” said TCU fan Debbie Wright. “Everyone was doing the horns down. There was so much excitement – the players were jumping up and down.”

“I felt like there was a certain energy in the whole arena,” said junior business major Collin Gund. “Because it was basically filled with all KU fans, but those KU fans started rooting for TCU […] I think everyone just doesn’t like Texas.”

Frog fans did not leave day one disappointed.

“I think this might be my favorite tournament so far,” said Susie Gurley, a Kansas City resident and TCU alumna who wrote for the Skiff in the early 90s.

Susie’s husband Dan Gurley, another TCU alumnus, has gone to the tournament with his wife every year since the Frogs joined the Big 12 in 2012. “We’re small but mighty, we’re the Kansas City TCU fans.”

Sophomore finance major John Robertson said he was just happy to be there. “It’s been such an outstanding season,” said Robertson. “This team’s got a lot of heart, and we’ve shown that. I think we’ve got a lot of potential and I’m just excited to see us play.”

Although the Frogs fell short to the Jayhawks in the semi-finals, they are ready for the sunshine in San Diego as they take on Seton Hall in round one of the NCAA Tournament tonight at 8:57 p.m. The matchup will be broadcasted live on TruTV.