TCU basketball ‘locked in’ ahead of matchup with Seton Hall 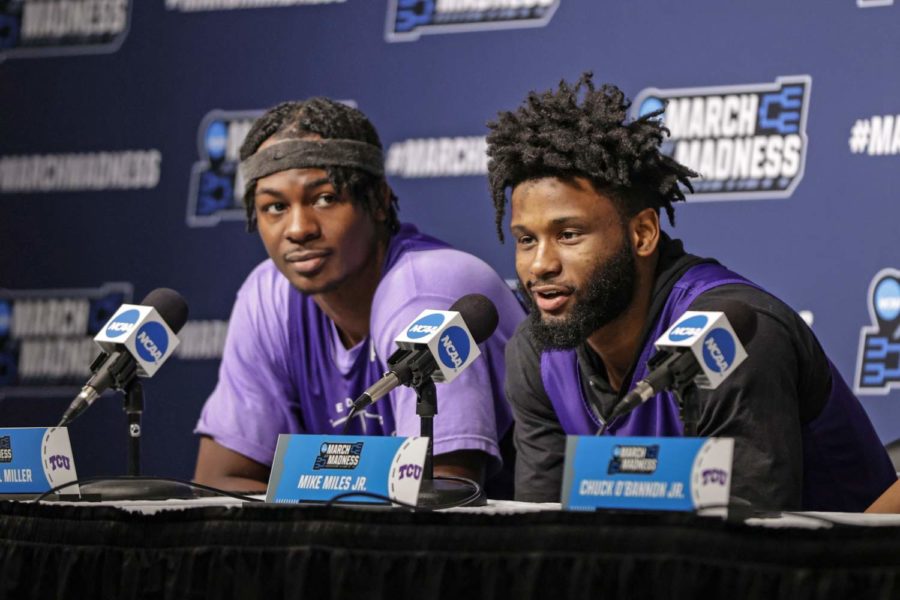 TCU's Emanuel Miller (left) and Mike Miles (right) speak with the media on Thursday, Mar. 17, ahead of the Frogs' matchup with Seton Hall in the First Round of the NCAA tournament in San Diego, Calif. (Photo courtesy of gofrogs.com)

The four TCU basketball players that were asked to speak to the media on Friday prior to the First Round of the NCAA tournament were not there to mess around.

The group, consisting of Mike Miles, Emanuel Miller, Damion Baugh and Chuck O’Bannon, looked as locked in as they have all season.

“We’re locked in right now. You know, the coaches have been on us the last couple of days in practice,” Miles said. “We don’t have a choice but to be locked in. Like I said, this is the biggest game of our life coming up.”

Miles is right, as only one member of the TCU roster, Micah Peavy, has any experience in the NCAA tournament. Peavy went with Texas Tech when he played for the Red Raiders last season.

To the Frogs, the team’s inexperience in the Big Dance is not a negative, but something that provides a unifying factor to a team that has thrived on togetherness all season.

“Excited to take it in. We have juniors, seniors on the team, but in a sense, we’re all freshmen because this is our first time,” Miller said. “We’re all just tryin to take it in but at the same time staying disciplined to the fact that we’re here to compete.”

TCU will compete first against Seton Hall of the Big East. Here’s a look at the Pirates and the threat they face to the Frogs advancing to the Round of 32:

The first thing that stands out about Seton Hall is their size. Each member of the Pirates starting lineup sits at 6’6″ or taller.

Center Ike Obiagu is the peak of what is a mountain of a depth chart for Seton Hall. At 7’2″, the graduate student is a massive presence inside the paint, leading the Big East with 3.3 blocks per game.

A look at Seton Hall’s Ike Obiagu, who Jamie Dixon called the best paint presence that #TCU has seen all season.

Obiagu is the Pirates’ all-time leader in blocks with 204. Should be quite the test for the Frog big men tomorrow. pic.twitter.com/cNQx5x6iKT

After just three years with the program after transferring from Florida State, Obiagu is the Pirates’ all-time blocks leader with 204 in his career.

TCU head coach Jamie Dixon said to the media Thursday that the Frogs have not yet seen a paint presence like Obiagu this season.

“I think he’s [Obaigu] probably the best one at it [rim protecting]. He’s solely, that’s his job,” Dixon said. “I recruited him six years ago I think when I was at Pitt. I knew him well.”

The size that the Pirates have helps them on the boards as well. They finished second in the Big East this season with 40.5 rebounds per game.

Forward Alexis Yetna leads Seton Hall on the glass with 7.8 rebounds per game. He is the first Pirate off the bench, adding 8.4 points per game to his rebounding numbers.

TCU leads the Big 12 with 38.78 rebounds per game. The Frogs also thrive on the offensive rebound end, leading the conference with 12.97 per game.

TCU has won just just two games when they lost the rebound battle all season. Against a team that dominates the boards like Seton Hall, diligence on the boards will be even more important.

Another similarity between the two teams is their lack of scoring. Both schools, ironically, rank 9th in their respective conferences with 68 points per game.

The Pirates’ one potent scoring threat is senior Jared Rhoden. The guard ranks 7th in the Big East with 15.4 points per game on 39% shooting from the field.

Like Miles for TCU, Rhoden is a serious threat to pop off for Seton Hall. He’s scored 25-plus points three times since the start of conference play, including a 30-point performance against Xavier last month.

For the Frogs, Baugh or guard Micah Peavy will likely be on Rhoden all game. In Seton Hall’s last game, Rhoden was held to seven points on 2-for-13 shooting in a 10-point loss, so look for Dixon to give him serious attention all game.

While trying to force turnovers on the defensive end, the Pirates like to ice on ball screens and trap the ball handler on the sideline while covering his outlet to pass at the top of the key.

That could work against the Frogs, as they’ve struggled with ball control for the majority of the season.

“We’ve improved it [ball control], and we’ll continue,” Dixon said. “But I think everyone would say the same things. We come from a league where they force a lot of turnovers, the numbers are high.”

If TCU can take care of the ball, generate consistent offense, and win the rebounding battle, they should be looking at their first NCAA tournament win since 1987.

Ahead of the biggest game of their lives, the Frogs did not stay stone-faced and serious for too long, as several of them showed off their bounce in a friendly dunk contest at the end of their open practice.

What do y’all know about that #TCU athleticism? @MikeMilesJr_, @EmanMiller5, Darius Ford, and @_swaggyd10_ can all get up.

“It’s like a dream come true, but this is only the first step, part of my dream,” Miller said. “My dream is to in it all, and I think playing Seton Hall first is the first step.”