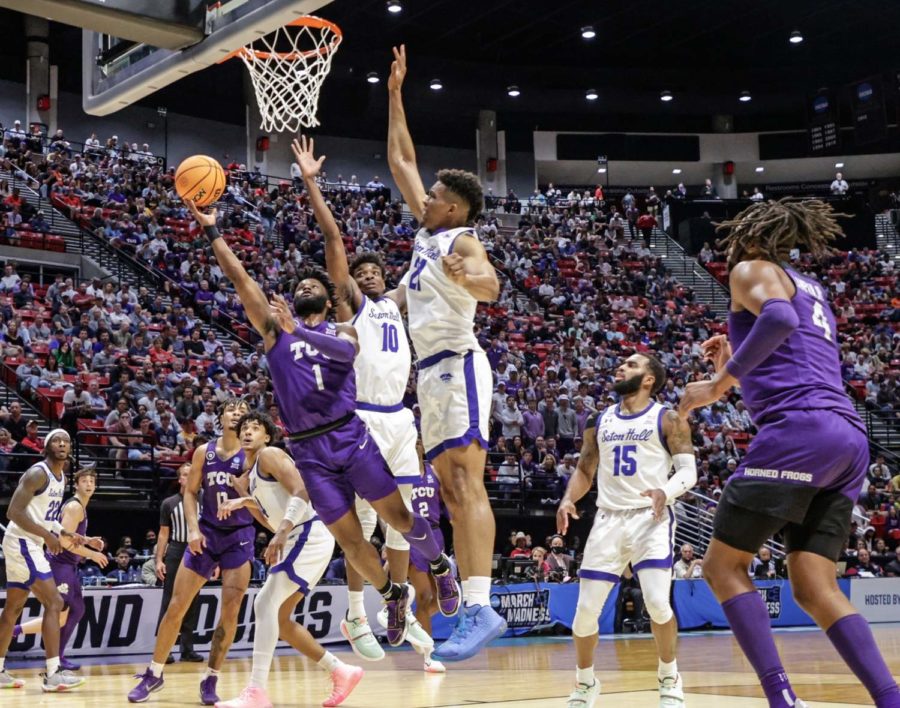 TCU guard Mike Miles (1) drives to the hoop for a contested layup during the Frogs' 69-42 beatdown of Seton Hall in the First Round of the NCAA tournament on Mar. 18, 2022, in San Diego, Calif. (Photo courtesy of gofrogs.com)

One blown whistle told TCU basketball that they had won their first NCAA tournament game in 35 years.

Seton Hall’s leading scorer, Jared Rhoden (15.9 points per game), had just been called for his fifth foul. Head down, he trudged to the bench with just five points on 2-for-7 shooting.

There were still almost 13 minutes left to play, but the Frogs held a commanding 21-point lead, as the Pirates were left without an active player averaging more than 9.8 points per game.

With Seton Hall missing their leader, TCU never took the foot off the gas, winning their first NCAA tournament game since 1987 in 69-42 blowout fashion on Friday night in San Diego, Calif.

Head coach Jamie Dixon knows all about the last time the Frogs won a game in the Big Dance, as he was a player on TCU’s roster that year.

Tonight, the thousands of Frog fans in attendance cheered as TCU players ran towards them following the victory, smiling, yelling, and high-fiving their loyal supporters.

Basketball culture is spreading in Fort Worth.

#TCU dominates Seton Hall by 27, and @EddieLampkin25 goes over to show love for the Frog fans. They were loud and made themselves known all game. pic.twitter.com/PGctJyl8mI

To Seton Hall head coach Kevin Willard, it was Miller who stood out the most when evaluating the Frogs’ most dominant defensive performance of the season.

Miller had been outstanding defensively, leading TCU with three steals and a block. He also added 10 points on 4-of-6 shooting on the offensive end.

Leading the Frogs defensively was All-Big 12 guard Mike Miles, who finished with a game-high 21 points to outshine Rhoden.

Yesterday, Rhoden had shown respect for Miles’ game to the media, but the Pirates’ guard also referred to the Frogs’ leading scorer as “streaky.”

“He [Miles] can hoop. all the players in the country know he can hoop,” Miller said. “I’m proud of what he did today.”

Despite having a significantly smaller starting lineup than Seton Hall (11 combined inches), TCU dominated on the glass, outrebounding the Pirates 39-26.

After grabbing three in the contest, forward Eddie Lampkin is now tied for 7th-most in TCU history for a single season with 93 offensive rebounds this year.

To add icing to the cake, every active member of TCU’s roster, including walk ons, got playing time in their most important game of the season.

Dixon felt like it was the most complete game the Frogs have played all season.

“I thought that was a real good indicator of us growing up and getting better,” Dixon said.

In the week leading up to the game, TCU emphasized their to take care of the ball, but they did just the opposite to start the game.

The Frogs turned the ball over four times in the first three minutes of the game. The Pirates started the game 1-4 from the floor, though, and the game was tied at two after four minutes.

By the first media timeout, the game was already looking like a rock fight. The two teams were a combined 4-for-14 from the field with seven combined turnovers, and the game was tied at four.

Several minutes later, TCU extended their run to 7-0, going up 9-4 on a free throw by forward JaKobe Coles. The Frogs had been outstanding to start defensively, holding Seton Hall to just two makes in their first 11 shots.

The Pirates would pull within one twice near the midway point of the half, but the Frogs never gave up the lead, eventually going up by five (16-11) again with 8:22 before the half.

TCU then had one their best defensive sequence of the season. Forward Emanuel Miller swatted a Seton Hall put back into the third row, then the Frogs forced a five-second call on the Pirates ensuing inbound play.

On Seton Hall’s next possession, guard Micah Peavy swatted another shot into the stands, and TCU looked in complete control on the defensive end.

“We’ve been preaching what we could become, what we have been, at times, defensively,” Dixon said. “I think, today, you saw it for 40 minutes. I thought it was a special effort, special performance.”

The Frogs soon gained control on the offensive end as well, putting together a 10-0 run to take a commanding 22-11 lead with five minutes left in the half.

As the half dwindled down, the environment in Viejas Arena continued to ramp up. TCU fans were chanting “T-C-U!” or “Eddie! Eddie! Eddie!” while the Seton Hall fans were yelling “Lets go Pirates!”

That energy kept up, as the two teams traded blows from there. The Frogs took their biggest lead of the game at 28-15, but then the Pirates drilled back-to-back three-pointers to made it a single-digit game.

Miles missed a wide-open layup at the halftime buzzer, but he had put up a game-high 10 points in the first 20 minutes, as TCU lead 30-21 at the break.

In the first half, the Frogs held the Pirates to just 27.6% shooting from the floor as a team. Rhoden was 1-for-5 with two points and three fouls to that point.

TCU could not have had a better start to the second half, as Baugh hit his first three-point attempt of the day to extend their lead to 12.

Baugh finished with 14 points, 6 assists and 5 rebounds, but he said postgame that it was TCU’s “defense” that helped them continue to extend their lead.

“Just playing defense and taking care of the ball. That was really it,” Baugh said. “Coach expressed that every day. That’s what we went out there and did.”

Things got even better for the Frogs moments later, as Rhoden picked up his fourth foul with 18:25 still left to play in the game.

After just over three minutes had gone by in the second half, TCU had gone on a 9-2 run, and their lead was up to a game-high 16 points.

Forward Eddie Lampkin had been pivotal during that sequence, scoring a layup after a nasty pump fake before hitting forward Chuck O’Bannon on a flashy dime that led to two made free throws.

Things began to get out of hand as time went by in the game. The Frogs went on an 8-1 run to extend their lead all the way to 21 before the game even got to the midway point of the second half.

Around the time that Rhoden fouled out, former TCU star and current Memphis Grizzlies guard Desmond Bane took to Twitter to shoutout the Frogs.

TCU seemed to gain even more strength from Rhoden’s departure. O’Bannon stole a pass and hit Peavy flying down the court for a dunk, giving TCU a 25-point lead and all-but putting the nails in the coffin for Seton Hall with 9:50 left.

Though his stat line did not show it, Peavy was a leader for the Frogs all night defensively, as he was guarding Rhodes for most of the game.

“He’s [Peavy] super important. On the defensive end, it starts with him,” Miles said. “We put him on the best player. Every time he comes in, he’s going to try his hardest. That’s the best attribute of his game.”

Over the back half of the second half, the closest that the Pirates got was within 18, as the Frogs controlled the pace of the game to the end and cruised to a blowout victory.

TCU will get a chance to make history on Sunday night against one seed Arizona. Tip-off is scheduled for 8:40 p.m. on TBS.

“They [Arizona], obviously, have two good bigs starting that can score and rebounds. They’ve, obviously, got Bennedict [Mathurin], the guard who’s a projected lottery pick,” Miles said. “We know what they have.”