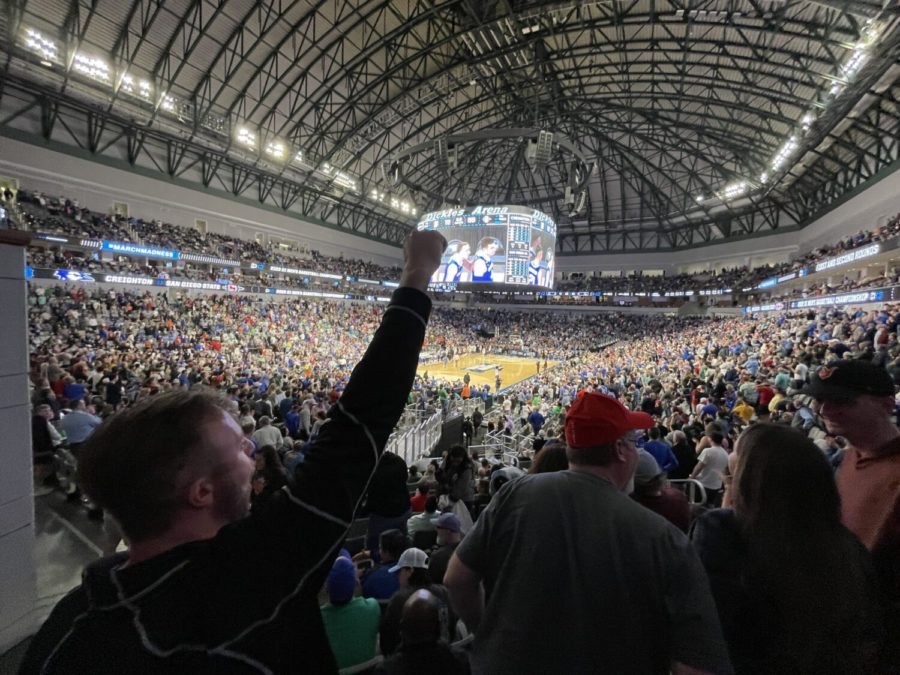 Madness is the perfect way to describe downtown Fort Worth on Thursday.

Traffic was backed up and restaurants were slammed with customers as Cowtown hosted March Madness for the first time since 1970. Doors opened at 11:30 a.m., and fans were ready to fill the 13,550 seats at Dickies Arena.

Tournament play tipped off at 1 p.m. with Baylor and Norfolk State, followed by a match up of No. 9 seed Marquette and No. 8 seed North Carolina.

Fans flocked from all around the nation to see their schools compete.

“There was no way I was missing coming to Texas for this,” said Jackson Jones, a junior from UNC. “We have a chance to beat Baylor – In Texas. It was too good not to come.”

Others, like Cary Miller, loved that the tournament was being hosted in their own backyard.

“I’ve lived in Fort Worth for twelve years, and now I get to see my Bears here in the tournament,” said Miller.

No matter where they came from, spectators got three blowout games, but fans got a thriller before Kansas routed Texas Southern.

Play stepped up when the No. 9 seed Creighton Blue Jays took on the No. 8 seed San Diego State Aztecs. The Blue Jays fell behind early and didn’t catch up until late in the second half. Creighton came back from nearly 15 points down, ending the Aztecs’ run.

The atmosphere was electric by the time No. 16 seed Texas Southern University Tigers went up against the juggernaut that is No. 1 seed Kansas Jayhawks.

Baylor and Kansas brought waves of fans with them, while Kansas and Creighton fans turned the arena into a sea of blue.

Creighton’s mascot, Billy Bluejay, stole the show during a break in the game by doing a walking handstand for the length of the court.

During a timeout when the team bands competed to be heard, Billy began breakdancing in center court amid the cheerleaders, looking to take the spotlight, again.

Live look-ins on the video board allowed fans to keep up with games across the country.

Chaos erupted when No. 5 seed University of Connecticut fell to No. 12 seed New Mexico State. Then St. Peter’s University, seeded No. 15, sent home No. 2 seed Kentucky.

Meanwhile on the court, Creighton and San Diego went into overtime. 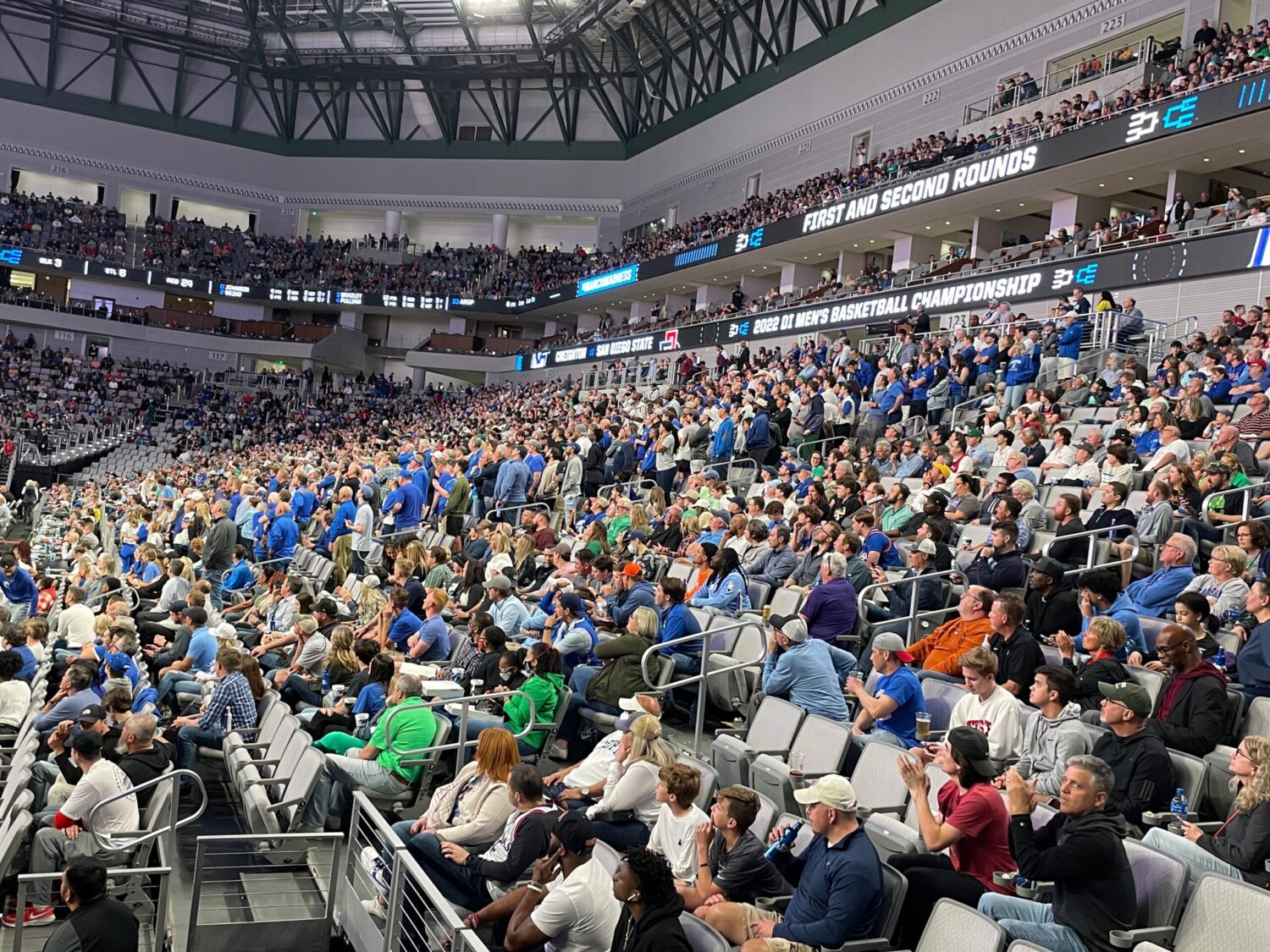 Creighton’s fan section reacts to the team tying up the game late in the second half. (Micah Pearce/Staff Photographer)

The Blue Jays completed the comeback and beat the Aztecs 72-69.

Kansas and Texas Southern took the paint next. Kansas won its five previous matches, most recently in 2017, when they won 117-71.

The Jayhawks took a commanding lead early on Thursday and never let go.

During the break, Texas Southern’s Tommy the Tiger beat Kansas’ Baby Jay in a dance competition. The fans fed off the spirit both teams showed, and the mascots played a huge role in hyping up fans during the game. 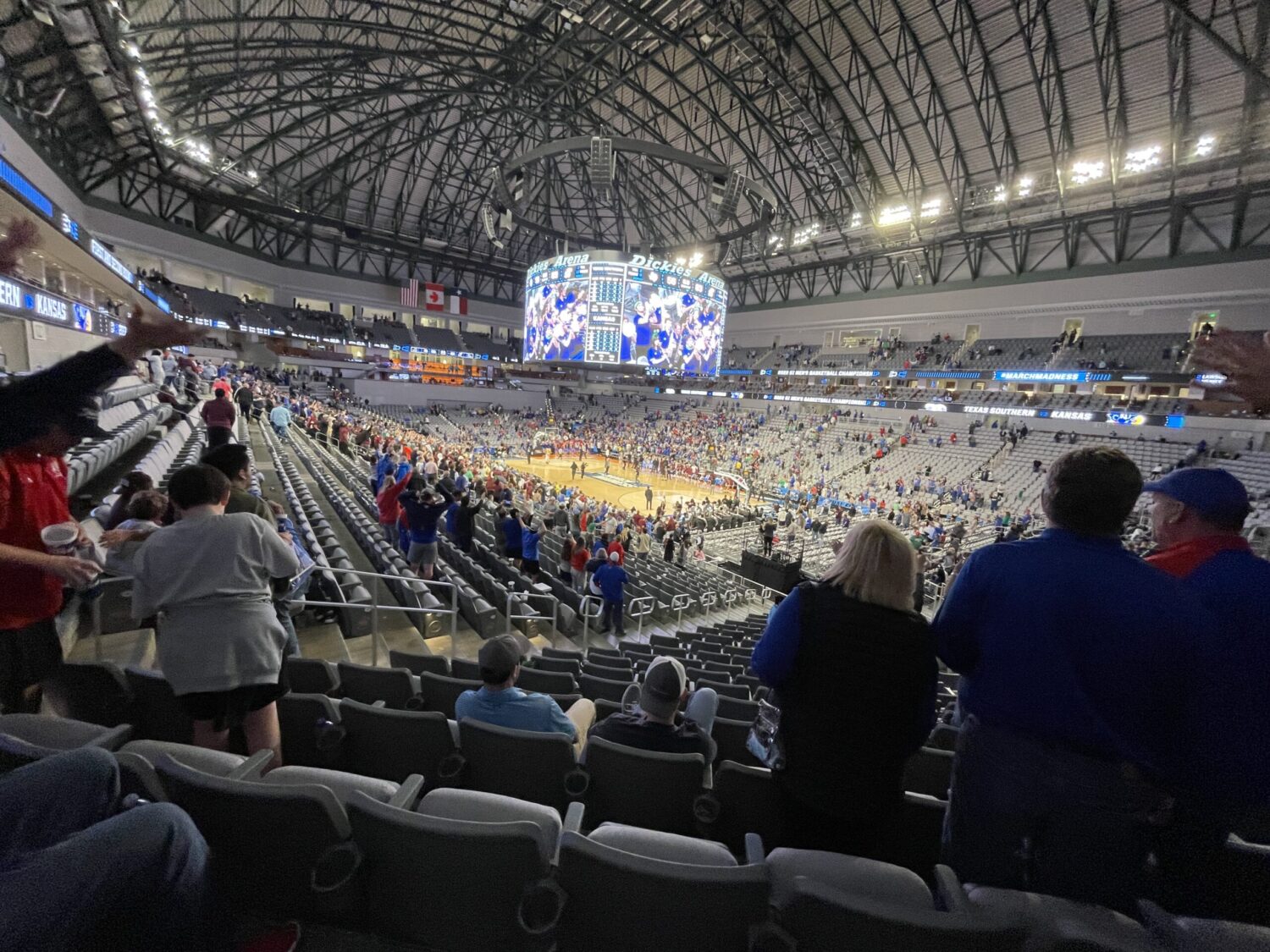 After Kansas lead by over 30 points at halftime, many fans cleared out before game’s end. (Micah Pearce/Staff Photographer)

The president of Texas Southern questioned the pairings.

“I think the NCAA needs to rethink how they do seeding, I think they need some innovation and disruption,” said Dr. Lesia L. Crumpton-Young.

However, even in the matchup between No. 8 seed North Carolina and No. 9 seed Marquette, the former won by a large margin: 95-63. Anything can happen on the court in March.

Despite the upsetting loss, Crumpton-Young said she was proud of the team’s performance this season and was even more excited to see them compete in her hometown of Fort Worth.

“My favorite spot is the Water Gardens and our hotel is right across, so I’m happy to have the opportunity to experience it,” said Crumpton-Young. “We’re gonna spend a little more time here. They’ll get to enjoy the city tomorrow, so I think it’ll be a great opportunity for them.”

Kansas fans were more excited about how the game went, including Kansas-native Becca Hammersmith. Despite watching all the previous games, which started at 1 p.m., the game at 9 p.m. featuring Kansas was the most memorable.

“I was excited to come because I’ve never been to a March Madness game,” said Hammersmith. “We were here for all four games, [which were] fun, but not as exciting as this one.”

The doors opened for the first set of games at 11:30 a.m., and the final game concluded around 11:30 p.m. Hammersmith and her family got nearly 12 hours of March Madness by the conclusion of their trip.

Chase Prince contributed to this report.