On to the next one: TCU basketball eyes historic takedown of Arizona 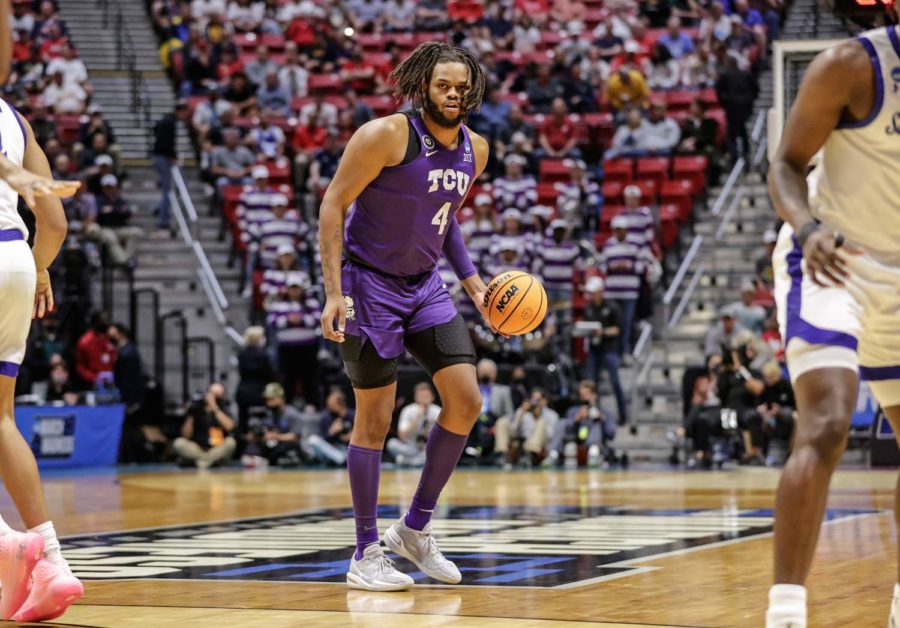 TCU forward Eddie Lampkin (4) surveys the floor during the Frogs' 69-42 rout of Seton Hall in the First Round of the NCAA tournament on Mar. 18, 2022, in San Diego, Calif. (Photo courtesy of gofrogs.com)

Earning TCU basketball’s first NCAA tournament win since 1987 was not enough for the Frogs.

They want to make history.

“It would mean a lot. We made history yesterday, winning a game, 35 years,” guard Mike Miles said. “We’re looking to make more history tomorrow. It’s not going to be easy. Arizona is a great team.”

Miles is right. It won’t be easy for Frogs on Sunday, as the Wildcats enter the game as not only the top seed in the South Region but the No. 2 team in the entire country.

A positive for the Frogs is that they’ll do it on a full day of rest with no travel, which has been rare for a team that just played five games in the first 11 days of March.

“I feel like this is something we really needed,” forward Xavier Cork said of the rest day. “Especially lately, we have had a lot of games on the road going back-to-back.”

Here’s a look at Arizona and what makes them so difficult to face:

The Wildcats make their money on the offensive end, ranking third in the country in scoring offense with 84.6 points per game.

Over the course of their season, the Pac-12 champions had an average scoring margin of 17.03 points per game, shooting an impressive 49.7% from the field as a team.

Leading the way for Arizona on the offensive end is guard Bennedict Mathurin, the Pac-12 Player of the Year. The sophomore averages 17.4 points (2nd in conference), 5.2 rebounds, 2.5 assists and a steal per game.

In the Wildcats’ First Round matchup with Wright State, Mathurin scored 18 points on four-made three-pointers and grabbed five rebounds.TRh

“He [Mathurin] is a talent. He is athletic. He is long,” head coach Jamie Dixon said. “I think his shooting had improved. You can see it.”

Mathurin isn’t lights out from three, shooting 37.7%, but has hit three-plus three-pointers in 10 games since the start of conference play.

TCU typically assigns guard Micah Peavy to their opponent’s best player defensively, so expect Peavy to be on Mathurin for most of the night.

“It’s going to be tough, but you just have to, I’d say, play like we play Ochai [Agbaj] from Kansas,” Peavy said. “They’re similar players, so just guard him [Mathurin] how we guarded him [Agbaji].”

Though they’ve never seen him in a college game, Dixon and Miles are very familiar with Mathurin, as they faced him in the FIBA U-19 Basketball World Cup this summer.

The United States, led by Dixon and Miles, defeated Mathurin and Canada 92-86 in the semifinals. Both players showed out, with Mathurin scoring 19 points to the 15 of Miles.

“I remember Bennedict [Mathurin]. He was good. He was on the Canada team,” Miles said. “It was a close game. It was agodo game, so I definitely known what he is capable of.”

Mathurin is far from alone, though. Arizona has two massive scorers inside, forward Azuolas Tubelis (6’11”) and center Christian Koloko (7’1″), who combined for 26.7 points per game.

The paint duo is also one and two for the Wildcats on the glass, with Koloko leading the team with 7.3 rebounds per game (4th in conference) and Azuolas grabbing 6.3.

“I think that’s the biggest thing that stands out to me. They [Arizona] can score inside,” Dixon said. “Their bigs can play on the perimeter. They have good perimeter shooting, but, yet, they can get to the basket too from their perimeter.”

The Wildcats’ biggest threat in that department is guard Kerr Kriisa (2nd in Pac-12 with 4.9 assists), but the sophomore has missed the last three games for Arizona with a right ankle injury.

With Kriisa out, guard Dalen Terry has stepped up, averaging 14.3 points and 4.7 assists over the last three games for the Wildcats.

Terry also has some added motivation entering the game, as he was part of the group not selected for Dixon’s U-19 team.

“I was a little hot about it,” Terry said of not making the team.

To pull off a historic upset, TCU will need big individual performances from guys like Miles combined with the well-rounded contributions they saw against Seton Hall.

They’ll also need to fight against what they expect to be a massive crowd of Arizona fans.

Looking one of the biggest wins in the history of TCU Athletics, the Frogs take on the Wildcats tomorrow night at 8:40 Central Standard Time on TBS.

“It would mean a lot,” Peavy said. “Like you said, it would be the first time we’ve won a second game in this tournament.”