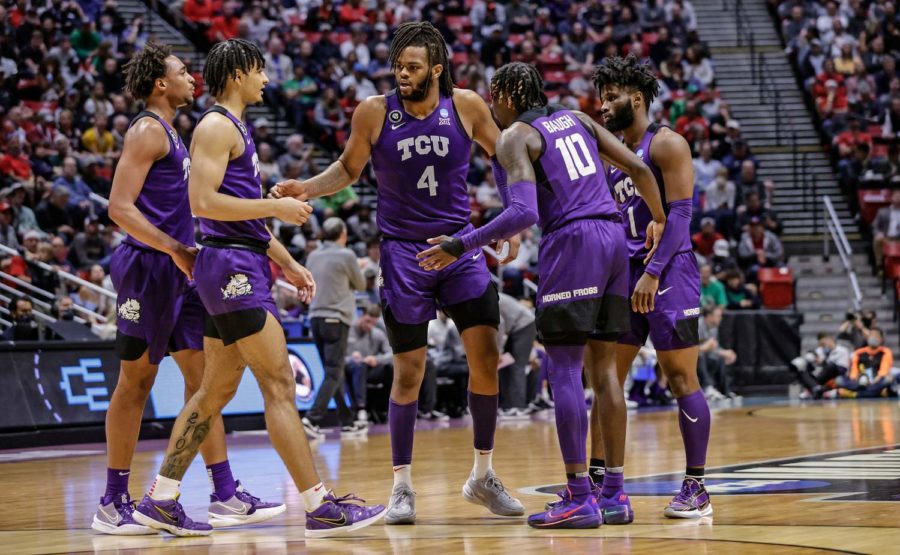 TCU players huddle together during the Frogs' nail-biting 80-75 overtime loss to one seed Arizona in the Second Round of the NCAA tournament on Mar. 20, 2022, in San Diego, Calif. (Photo courtesy of gofrogs.com)

TCU basketball now has the attention of the entire college basketball world.

As predicted by ESPN, Vegas and every sports-related site around the nation, the Frogs fell to top seed Arizona in the Round of 32 on Sunday night in San Diego.

But it was how TCU lost – a 5-point defeat in overtime- that mattered.

“I just think I told them they made millions of fans tonight by watching this game,” head coach Jamie Dixon said. “The challenge now is to handle it the right way after this loss.”

Trailing by 9 points late in the second half, TCU went on a monstrous 12-0 run to take a 70-67 lead with under four minutes remaining.

Forward Eddie Lampkin then scored the Frogs’ last 5 points, keeping their lead at 3 with just 36 seconds left on the clock.

In front of millions watching on the television, Lampkin produced the game of his life in the loss, dropping a career-high 20 points and adding 14 rebounds to round out the double-double.

Ten of his rebounds were on the offensive end, giving the freshman 103 total on the season. That put him at third all-time in TCU program history for offensive rebounds in a season.

“In the biggest game of his [Lampkin’s] life, he played the most minutes. I think he had a career-high in points,” guard Mike Miles said. “He had a great game. We trust him. I believe in him.”

All night, in the arena and all over social media, fans had praised Lampkin, gravitating towards his contagious energy demeanor.

Following a layup by Lampkin, victory seemed inevitable for TCU, but Pac-12 Player of the Year Benedict Mathurin pulled up from well-behind the 3-point line and drilled it with 13 seconds left to tie the game at 75.

On the Frogs’ final play of regulation, the Wildcats double teamed Miles and forced him towards the half court line.

No whistle was blown, and the ball went flying, leaving way for a game-winning dunk by Arizona’s Dalen Terry that was later ruled after the buzzer.

Dixon did not comment clearly on the play, saying, “We’re going to handle it the right way.”

Once the game was in extra time, Mathurin and Arizona took advantage of 2-for-10 shooting by TCU and ended the Frogs’ season in an 85-80 defeat.

Down 3 points with time ticking down, TCU forced a missed 3 by Mathurin, but Arizona center Christian Koloko put the nails in the coffin for the Frogs with a put-back slam with nine seconds to play.

Koloko was not far behind with 28 points of his own on impressive 12-for-13 shooting. He also added 12 rebounds and three blocks.

The trio of Lampkin, Miles and forward Chuck O’Bannon combined for 63 points in the contest for the Frogs. Miles finished with 20, giving him an average of 20.5 points per game in the two tournament games.

All three players were chosen to talk to the media after the game, and each of them held back tears as they answered questions.

“This season was everything for us, because we weren’t even expected to be here,” O’Bannon said. “For us to win our first game and be that close with the No. 1 seed just shows that we have a bunch of guys with a lot of grit. That’s all you can ask for.”

Like Lampkin, O’Bannon also had a career night, setting career-highs in points scored (23), 3-pointers made (5) and steals (4).

Like it had been shot out of a cannon, TCU exploded out of the gate in the first half. Following a block from Lampkin, O’Bannon caught a pass in rhythm and drilled his first 3 of the game to get the scoring going.

The Frogs went on to force misses on Arizona’s first six shots, allowing for TCU to go on an 8-0 run before anyone in the arena knew what had happened.

Even after the Wildcats got their first score, O’Bannon got a good jump on a missed shot and threw down the put-back, sending the Frog fans into a frenzy.

Koloko then became a problem for TCU defensively. The 7’1″ junior scored 10-straight points for the Wildcats in the span of three minutes, putting the Frogs behind (18-17) for the first time in the game.

That did not faze TCU, though, and it continued match the energy of its opponent. Over the next six minutes, the teams were tied six times.

The sixth tie came on a vicious slam from Lampkin, after which he shook the entire rim and had the Arizona players and fans calling for a technical foul.

“He [Lampkin] made a lot of progress. Everybody knows he cut down weight,” Dixon said. “He’s gotten so much better since the first time we stepped on campus last year.”

The Wildcats then scored 5-straight points over the next minute to take their biggest lead of the game to that point.

The Frogs had gone over two minutes without scoring, but O’Bannon’s third 3-pointer of the game with 2:59 before the half cut Arizona’s lead to 2.

Two free throws from Lampkin before the half made it 39-36 going into the break. Koloko was up to 18 points on his own, leading to a dominant 26-12 points in the paint advantage for the Wildcats.

Though TCU shot just 40% as a team in the first 20 minutes, it had forced nine turnovers and committed just six to help lessen the deficit.

The Frogs came out of the locker room like a pack of wild dogs, going on an exhilarating 11-2 run to take a 6-point lead before three minutes had gone by.

Bodies were diving left and right, fans from both sides were screaming at the top of their lungs and the game had turned into an all-out brawl.

By the 15-minute mark, Arizona had put together a trio of unanswered buckets, and the score was locked at 50 apiece.

At that point, all momentum seemed to shift towards the Wildcats. Over the next seven minutes, TCU made just two field goals, allowing for Arizona to take there biggest lead of the game at 66-58 with 7:52 left to play.

Early in that run, a poster by Mathurin on Lampkin and a fourth foul called on Miles slowed down a Frog squad that had looked to be in full control just minutes before.

“We just knew the game wasn’t over. We got stops on defense,” Miles said. “We went down and got buckets. Eddie [Lampkin] had some of his plays. Chuck [O’Bannon] had a great night.”

The Frogs were not able to finish the job in regulation, though, and the Wildcats stormed past them in overtime to prevent history from being made.

TCU basketball has still never won consecutive games in the NCAA tournament or defeated a No. 1 seed.

What the Frogs did accomplish was monumental, though. They set program records for ranked wins (five) and Quad 1 wins (nine) on top of winning their first NCAA tournament game in 35 years.

More importantly, though, they showed the nation that TCU basketball is a force to be reckoned with that is, likely, not going anywhere anytime soon.

“We’ll get it back next year,” Lampkin said.