Battle with the Bears: No. 21 TCU wins series in Waco 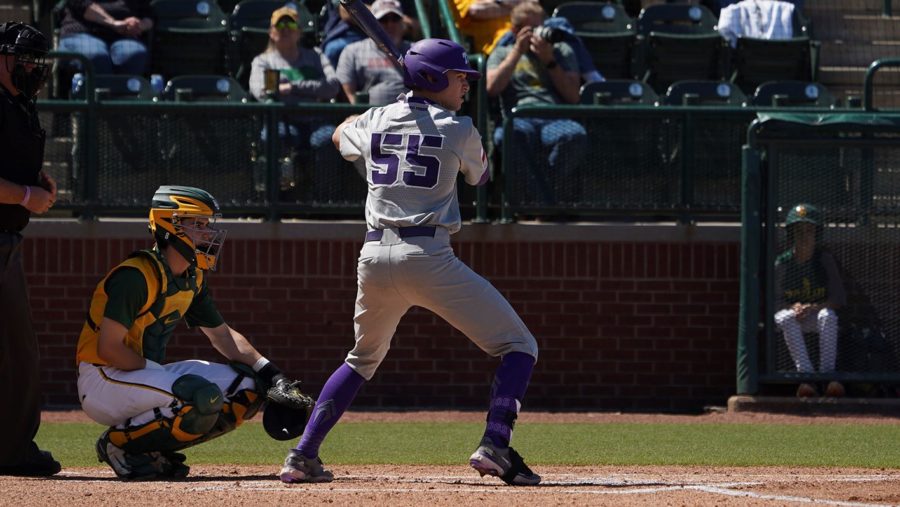 Third baseman Brayden Taylor and first baseman David Bishop as the Frogs drop the third game of the series 7-3 on March 20, 2022. (Photo courtesy of Gofrogs.com)

In its first Big 12 Conference games of the year, No. 21 TCU took two of three to secure the series victory against Baylor.

TCU (14-5) has fallen behind in a lot of games this year, but the team always seems to fight their way back up. Head Coach Kirk Saarloos shared his thoughts on the Frogs’ ability to battle against leads late in games.

“There is no quit in our team in terms of being behind sometimes,” said Saarloos. “We’re putting ourselves in that position too often.”

Saarloos said that the Frogs need to play better baseball, but winning a series on the road was great.

Here’s how the weekend went down:

Starting pitcher Riley Cornelio dominated on the mound, and shortstop Tommy Sacco had the hot bat as the Frogs defeated the Bears 3-0, winning their first Big 12 Conference game.

Starting pitcher Tyler Thomas, one of the league leaders in ERA, was on the mound for the Bears.

Cornelio needed to have a spectacular performance against a pitcher of Thomas’s caliber, and he delivered. His final statline was 8 IP, 2 H, 0 ER, 1 BB, 7 K.

In the 1st and 2nd, the Frogs grounded into two double plays, eliminating potential scoring opportunities.

Sacco was able to get a double play of his own after catching a rocket of a line drive and whipping the ball back to first base before the runner could get back safely.

A few innings later, Sacco sparked the Frog’s offense with a solo shot in the 5th and later hit a double down the left field line in the 7th. After a wild pitch, another run was scored.

In the 8th, a pair of doubles from center fielder Elijah Nunez and third baseman Brayden Taylor gave the Frogs another insurance run.

Cornelio had six 1-2-3 innings throughout the game and retired the last ten batters he faced. Closing pitcher River Ridings was sent in to close the game in the 9th and was able to pick up his sixth career save.

Saarloos said that Cornelio’s start gave the Frogs an opportunity to succeed.

“That’s what Friday nights should be,” said Saarloos. “We worked on a lot of things on Wednesday with him […] he did an awesome job putting it into play right away.”

The Frogs needed three runs in the 9th to send the game to extra innings; they delivered and went on to defeat the Bears 11-9.

In the top half of the 3rd, TCU’s first two batters of the inning were retired. The Frogs, in an impressive rally, had six consecutive players reach base safely. After a few walks and singles from Nunez, first baseman David Bishop and second baseman Gray Rodgers, the Frogs took a 3-2 lead. Sacco brought home two more runs with a double.

Walker was pulled in the 3rd inning but put on two runners that would eventually score, giving him four earned runs in the game.

The Bears continued to add runs, tying the game in the 5th after a rare fielding error by Nunez and taking the lead soon after with a single up the middle.

Both teams remained scoreless until the 8th inning, where Baylor took an 8-5 lead after their second two run home run of the game.

The Frogs hadn’t scored since the 3rd inning and needed three runs to tie the game. After four consecutive walks, the Frogs cut the lead to two.

Boyers was hit by a pitch, sending in another, but the Bears recorded their second out soon after. With the bases loaded, all the pressure was on Mason Speaker, who was pinch-hitting for Porter Brown.

Speaker, with a high bouncing grounder down the third base line, reached first safely and brought home the tying run.

The game then went to the bottom of the 9th, where Boyers made a great play, sacrificing his body and sliding near the barricade in foul territory to make the catch, sending the game to extra innings.

In the 11th, the Frogs had a pair of singles and a walk. The Bear’s defense, after two errors, allowed TCU to take the lead.

With closing pitcher River Ridings on the mound, the Bears hit a solo shot in the final frame but failed to catch up to the Frogs who won the game 11-9.

Starting pitcher Cam Brown made his first weekend-series start of the year, giving up four earned runs and seven hits in five innings.

The Bears got off to a hot start, scoring three runs in the first two innings. After, Brown settled down, throwing consecutive scoreless frames.

The Bears added to their lead in the 5th after a wild pitch from Brown, who was pulled after the inning.

Saarloos said that Brown has all the skills to have great starts for the team.

“All the things are there. All the ingredients are there,” said Saarloos. “It’s just a matter of him being able to go out there and find it right away. His last three outings now, its taken him a little bit to kinda get in that rhythm.”

TCU scored their first run of the game in the 7th with a sacrifice fly from designated hitter Owen Blackledge, but Baylor tallied two more in the bottom half to make it a 6-1 ballgame.

In the 8th, Taylor and Bishop hit back-to-back home runs for the second time in a week, cutting the Baylor lead to three. The Baylor bats, however, continued to produce, bringing home another run.

The Frogs were able to put two runners on but failed to score in the 9th as the series came to a close.

TCU will face Abilene Christian on the road on Tuesday ahead of their first Big 12 Conference series of the year at Lupton against Kansas State. First pitch is at 6:05 p.m.