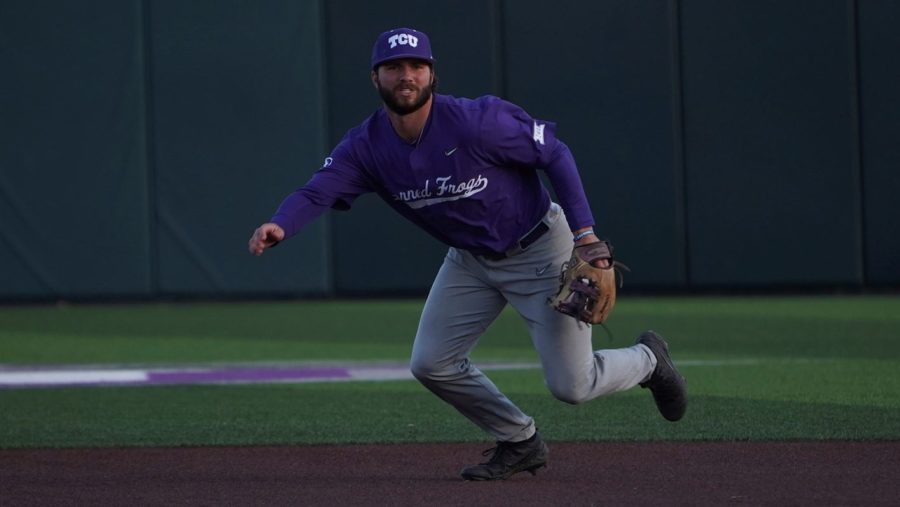 Second Baseman Gray Rodgers, on his birthday, hit a single, a double, a home run, and drew a walk as TCU defeated Abilene Christian 14-3 on March 22, 2022. (Photo courtesy of gofrogs.com)

Freshman pitcher Caedmon Parker got his first start of the year, giving up two runs through three innings.

TCU’s offense jumped off to a hot start, scoring 10 runs in the first two frames, during which they went through the entire batting order twice.

Caedmon Parker gave up a two run home run in the 3rd that cut the Frogs’ lead to 10. He was pulled for relief pitcher Auggie Mihlbauer, who gave up a solo shot in the 4th but was able to tally four strikeouts in two innings.

Nunez started the ballgame with a leadoff home run, his first of the year.

Rodgers, on his birthday, drove in four RBIs and did a little bit of everything, tallying a walk, single, double, and a home run, which was his first of the year.

Sacco had three RBIs and hit his third home run of the season.

Catcher Bobby Goodloe got the start and had a good eye at the plate, drawing four of the team’s 15 walks.

With TCU up 14-3 in the 7th, The Abilene Christian and TCU coaching staffs, as well as the officiating crew, discussed whether or not the game should end via run rule. After a lengthy discussion, the game was called and TCU secured the victory.

TCU (15-5) will take on Kansas State (11-7) in a weekend series at Lupton Stadium starting on Friday, beginning an eight-game home stand. TCU is undefeated at home (6-0), and Kansas State is on an eight-game winning streak. The first pitch of the series will be at 6 p.m.