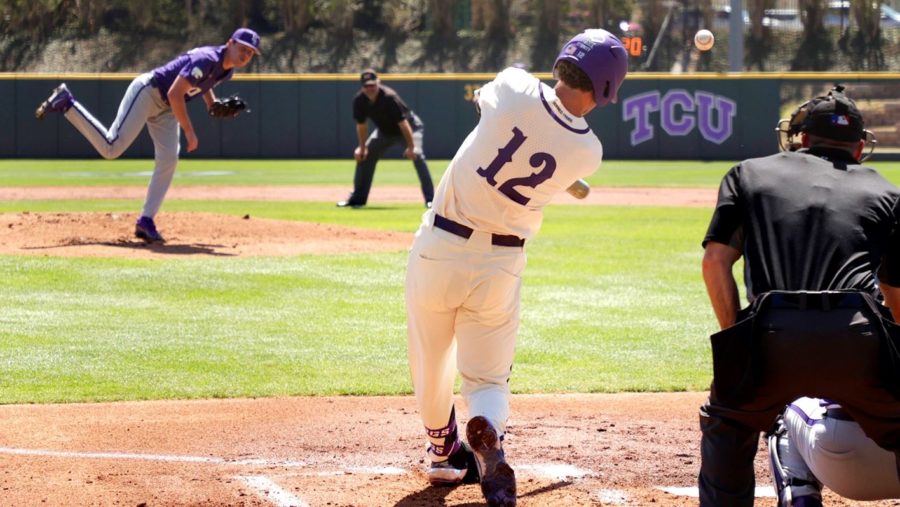 Every player for TCU tallied at least one hit, as the Frogs defeated Kansas State 11-3 on Mar. 27, 2022, in Fort Worth, Texas. (Photo courtesy of GoFrogs.com)

“A sweep means a lot,” said center fielder Elijah Nunez. “A sweep is huge, especially when you can get them against good teams, like [teams in] the Big 12.”

The Frog offense scored 32 runs throughout the weekend.

“We find a way,” said Associate Head Coach Bill Mosiello. “We’re averaging close to 8 runs a game, It’s not as glamorous as you may want it […] If you don’t throw good strikes against us, you’re going to be in trouble.”

Here’s what went down during the series:

In the 1st inning, TCU capitalized off a wild pitch and a throwing error by Kansas State’s starting pitcher, Blake Adams, taking an early 3-0 lead.

Cornelio gave up two in the 3rd, the only time in this ballgame he would allow Kansas State to score. The Frogs responded in the bottom half of the inning with two runs of their own through a Byrne single that scored Sacco and Bishop.

The game remained scoreless until the 6th, when Cornelio got into a bases-loaded jam with two outs. He secured the strikeout to end the inning and was visibly pumped up on the mound as Lupton roared with cheers.

The Frogs added to their lead in the 7th on back-to-back doubles by Taylor and Bishop. Then, relief pitcher Luke Savage, who replaced Cornelio after the 6th, tossed two scoreless innings to keep the lead secure.

In the 9th inning, the Frogs nearly gave up the lead, allowing three runs to score. Relief pitchers Caleb Bolden and Augie Mihlbauer put the runners on. Closing pitcher River Ridings, after giving up a single that brought home two unearned runs, secured the final out of the ballgame.

Shortstop Tommy Sacco had two home runs and a team-high six RBIs in game 2, as the Frogs dominated the Wildcats 14-5, nailing down a series win.

Starter Cam Brown, in his first two weekend series starts, has struggled to keep runs off the board early in the game.

Last weekend against Baylor, Brown gave up three runs in the first two frames. This week, he gave up three runs, allowing three hits, four walks, and hitting a batter. Brown also had a throwing error on a routine bunt.

Although his fastball was consistently in the 96-98 range, he frequently lost control and struggled to find the strike zone.

“Ultimately, we gotta get Cam [Brown] better,” said Saarloos. “We gotta get him dominant like he can be, you know? […] It’s trust. He just has to see himself have success before he has it.”

In the 2nd, TCU loaded the bases, allowing Bishop to walk in a run. Sacco then tied the game with a sacrifice fly.

In the 5th, TCU responded with three runs of their own in a long two out rally that started with a solo shot from Sacco. The other two runs scored after left fielder Logan Maxwell doubled to right field.

In the 6th, TCU opened the floodgates. Sacco hit his second home run of the day, a grand slam to right field that gave the Frogs the lead.

Fans were calling Sacco’s big home run the “Sacco slam.” Sacco, after the game, said the grand slam was “probably the best moment for me as a Horned Frog.”

Coach Saarloos said that the slam was a huge blow due to it distancing TCU from Kansas State’s reach.

“Kudos to [Sacco],” said Saarloos. “He’s been doing well all year and that’s exactly what we knew we were going to get from Tommy when we got him three years ago.”

Through singles, walks, and an error from the Wildcat defense, the Frogs added four more runs, stretching the lead to eight.

The Frogs continued to pile on with a Byrne solo shot in the 7th. Kansas State failed to respond as the game came to a close.

Bishop said that the win was “an awesome feeling.”

“To be punched in the mouth early, have some adversity, and then come back and do our thing,” said Bishop. “I think that is such a great team win.”

Taylor recorded his 100th career hit, and the Frogs defeated the Wildcats 11-3, securing the series sweep.

The Frog offense started out hot, scoring three runs in the 1st inning. After Nunez and Brayden Taylor both singled, Bishop brought them home with a triple. Second baseman Gray Rodgers put the ball on the ground, bringing in another.

In the 4th, starting pitcher Brett Walker allowed a two out single and a double that put Kansas State on the board.

Walker held the Wildcats to one run until the 6th inning, when they tied the game at 3-3.

In the bottom half of the 6th, TCU regained the lead. After a Byrne base hit, Maxwell got an infield single. There was a throwing error on the play that allowed Bryne to score and Maxwell to reach third.

Designated hitter Porter Brown drove in Maxwell with a sacrifice fly. Later in the inning, Bishop drove home Nunez, who tripled, with a single.

In the 7th and 8th, TCU continued to grow their lead, scoring five runs. The Wildcat offense was shut down by Savage and relief pitcher Garrett Wright as the series came to a close.

The Frogs remain undefeated at Lupton stadium. Mosiello said that the team is very comfortable at home.

The Frogs’ next five games are at Lupton stadium. They play Abilene Christian, who they defeated 14-3 last week, on Tuesday.

The Frogs will also play UTSA on Wednesday, a game that was supposed to take place Feb. 23 but was postponed due to poor weather conditions.