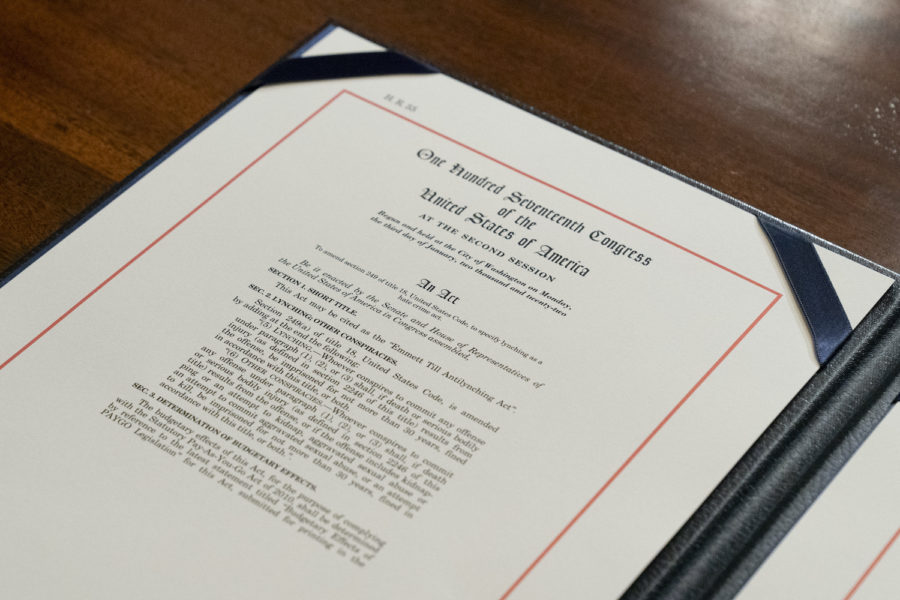 H.R. 55, the “Emmett Till Antilynching Act" which designates lynching as a hate crime under federal law, is placed on a table before being signed by House Speaker Nancy Pelosi of Calif., on Capitol Hill in Washington, Wednesday, March 16, 2022. (AP Photo/Alex Brandon)

A week after the Senate passed an anti-lynching bill named for Emmett Till, his last living cousin spoke at a TCU Facebook live event to talk about forgiveness.

The Rev. Wheeler Parker was with Till, who was 14 at the time, when Till “wolf-whistled” at a white woman in Money, Mississippi. The woman, Carolyn Bryant Donham, accused Till of grabbing her and being sexually menacing in the grocery store owned by her husband.

Several nights later, Till was taken from the home of the relatives he was visiting. Donham’s husband, Roy Bryant, and his half-brother, J.W. Milam, made Till carry a 75-pound cotton gin fan to the Tallahatchie River before making him take his clothes off and beating him to death.

Roy Bryant and Milam were acquitted by an all-white jury but later admitted to killing Till. In a 2017 book examining Till’s murder, Donham recanted the story of Till accosting her in the store.

“The wheels of justice grind slow, but they do grind, it is good to see some change,” Parker said. He was introduced by TCU’s race and reconciliation committee, which hosted the Facebook live event last Wednesday.

Rev. Wheeler Parker lives today to not only tell the story of his cousin but also try his best to make light of his cousin’s legacy. He learns all of this from Till’s mother.

“She never stirred up hate, she took the pain, anguish, and frustration and turned it into something positive,” Parker said.

Parker remembers that Till’s mother told him to carry on the legacy of her son, as she did. He knew these shoes were hard to fill, but would do anything in his power to obey her instruction.

One big way that Parker was able to carry out Till’s legacy was with the Emmett Till Memorial Center that he helped open.

The center serves a purpose to not only tell the story of Till’s tragedy but also point away toward social healing. The center uses different things like storytelling and arts to help individuals process their anger and pain and imagine ways to keep moving forward.

“I always tell people to brighten the corner where you are,” Parker said.

With everything that has gone on since the murder of Till, President Biden is now singing the Emmett Till Antilynching Act soon. This will be the nation’s first federal anti-lynching legislation and would establish lynching as an offense made by a person conspiring to commit a hate crime, resulting in death or serious injury, according to thegrio.com.

There is always more work to be done, and Rev. Wheeler Parker believes it’s a journey in which we must keep moving forward.