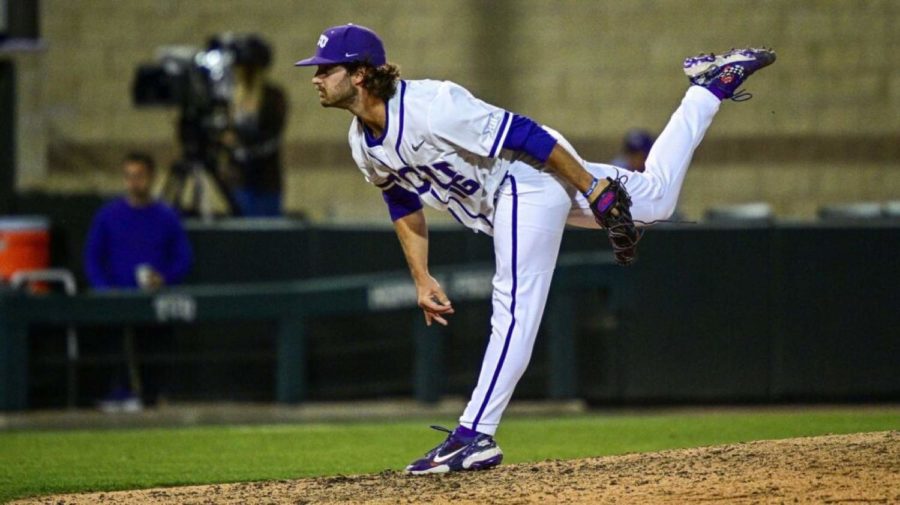 After losing two mid-week games at home, No. 12 TCU Baseball (19-9) lost their first Big 12 Conference series of the year against West Virginia (16-10) in a controversial fashion this weekend.

The Frogs scored nine runs on 17 hits throughout the weekend at Lupton.

With the bases loaded and the count at 3-2, first baseman David Bishop struck out looking on an outside pitch that was called a strike to end the game, as West Virginia defeated TCU 3-2.

Starting pitcher Riley Cornelio had another stellar performance. He gave up one run, allowed two hits and struck out a career-high eight batters through six innings pitched.

In the 1st, second baseman Gray Rodgers brought home Bishop, who had doubled.

The next run to score was in the 6th, when Cornelio threw a wild pitch that scored West Virginia’s right fielder, Austin Davis. Davis had stolen third to put himself in prime position.

TCU was able to take back the lead in the 7th after catcher Kurtis Byrne scored on a pass ball.

After a scoreless 8th, the Frogs needed three more outs to secure the victory. They sent in closing pitcher River Ridings to pick up the save.

After striking out the first batter, Ridings gave up back-to-back singles. He was then able to record another strikeout, putting the Frogs one out away from victory.

The Mountaineers were down to their final strike when chaos ensued.

Ben Abernathy took off for home plate. Ridings stepped off the rubber and threw home. Byrne applied the tag before Abernathy reached the plate but could not hold onto the ball. As Byrne ran after the ball, another West Virginia runner was able to score, giving West Virginia a 3-2 lead.

The Frogs were able to load the bases in the 9th with three walks, giving Bishop a great chance to tie or win the game.

Home plate umpire Mark Winters called strike three on an outside pitch to end the game. Bishop and the fans at Lupton did not agree with the call.

After a rough start to the game, a go-ahead home run by third baseman Brayden Taylor powered the Frogs to a 5-4 victory.

Starting pitcher Cam Brown started on the mound. After walking the first three batters and giving up a bases-clearing double, the Frogs were down 0-3. Brown, who was only able to record one out in the inning, was pulled after hitting a batter.

Relief pitcher Marcelo Perez took over on the mound, and Taylor made a great play to turn two to end the inning.

Perez gave up a run in the 2nd but was able to quickly settle down, throwing five scoreless innings and giving up one hit from that point on in a stellar outing.

The Frogs chipped away at the lead, scoring a run in the 2nd and the 3rd.

In the 6th, right fielder Luke Boyers sparked a big inning for the Frogs by getting hit by a pitch. Nunez was able to bring Boyers home with a single up the middle.

After many pickoff attempts to first base, Taylor turned on the first pitch of the at bat, launching it 429 feet into the trees, giving the Frogs the lead.

No more runs were scored in the ballgame, and TCU evened the series.

TCU head coach Kirk Saarloos got into a verbal altercation with umpire Mike Winters late in the game, as the Frogs were defeated by the Mountaineers 5-2.

Starting pitcher Brett Walker got off to a rough start, giving up four singles in the 1st. The Frog defense saved a run by turning a double play to end the inning.

The game remained scoreless until the 4th, when the Mountaineers started a two out rally. Walker loaded the bases and gave up a three run double, giving West Virginia a five run lead.

Designated hitter Bobby Goodloe singled in the 4th, driving home a run and putting the Frogs on the board.

In the 5th, West Virginia’s first baseman, Grant Hussey, was at the plate. He checked his swing on an inside pitch, and the ball hit his hand.

The call on the field was a foul ball. Hussey proceeded to take off his batting gloves and show the umpire evidence of the ball hitting his hand. Hussey was awarded first base.

Saarloos talked to the home plate umpire about the review being initiated by the umpires. He and umpire Mark Winters got into a heated conversation in the dugout that led to Winters initiating contact with the TCU coach.

“I was just making sure that it wasn’t my review but it was the umpire’s review, and he [Winters] got upset that I asked that,” said Saarloos.

Winters had also called the controversial strike three call on Bishop to end game one.

After, Bobby Goodloe was able to drive home another run, but the Frogs failed to catch the Mountaineers as they lost the final game of the series 5-2.

Saarloos said he’s keeping his focus on what lies ahead for the ball club. “We just have to play better baseball and take care of what we do and everything else will take care of itself,” he said.

After the weekend, TCU Baseball dropped to No. 23 in the D1 Baseball rankings. TCU will play UT Arlington on Tuesday and No. 7 Texas in Austin this weekend.