Bullpen shines as No. 23 TCU Baseball picks up road win against UT Arlington 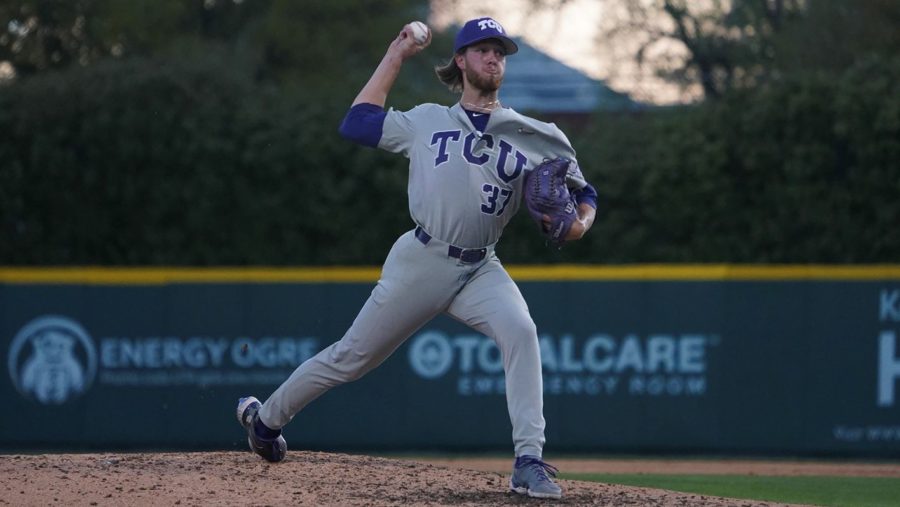 No. 23 TCU Baseball went deep into their bench on Tuesday night and defeated UT Arlington 10-2 after losing four of five games last week.

The Frogs jumped out to a hot start, scoring two runs in the 1st inning. Catcher Kurtis Byrne had an RBI single and right fielder Luke Boyers had a sacrifice fly.

Starting pitcher Caedmon Parker threw two scoreless innings for the Frogs before giving up a game tying two run home run to the mavericks in the 3rd.

Relief pitcher Caleb Bolden took over in the 4th; he gave up a base hit to UTA third baseman Boone Montgomery, who was thrown out trying to steal second to end the inning.

As the game went on, blunders by the Mavericks worked in TCU’s favor.

Designated hitter Kurtis Byrne started the 6th inning with a single, and second baseman Gray Rodgers reached on a throwing error by the UTA shortstop. Boyers was then hit by a pitch, which loaded the bases for the Frogs with no outs.

Left fielder Garrison Berkley hit a deep sacrifice fly to the warning track, scoring Byrne and advancing Rodgers. Goodloe followed it up with a single up the middle, extending the lead to two.

Center fielder Elijah Nunez hit the ball on the ground, but the Mavericks couldn’t make the double play, as the Frogs took a 5-2 lead.

The Frogs added two more runs in the 7th after a few defensive blunders by UTA.

Reed Spenrath took over at first base after pinch hitting for Brody Green, who made his first career start. Spenrath, in the 8th, launched his first career home run, a 397 foot solo shot. Nunez, after stealing third, scored on a wild pitch to make it a seven run ballgame.

Relief pitcher Augie Mihlbauer, who took over for Bolden in the 7th, threw two innings without giving up a hit and striking out three.

Owen Blackledge, pinch hitting for Goodloe, brought home the final run of the night with a sacrifice fly to give the Frogs a 10-2 lead.

Relief pitcher Garret Wright took over in the 9th, closing the game with three strikeouts.