No. 23 TCU baseball drops series to No. 7 Texas in Austin 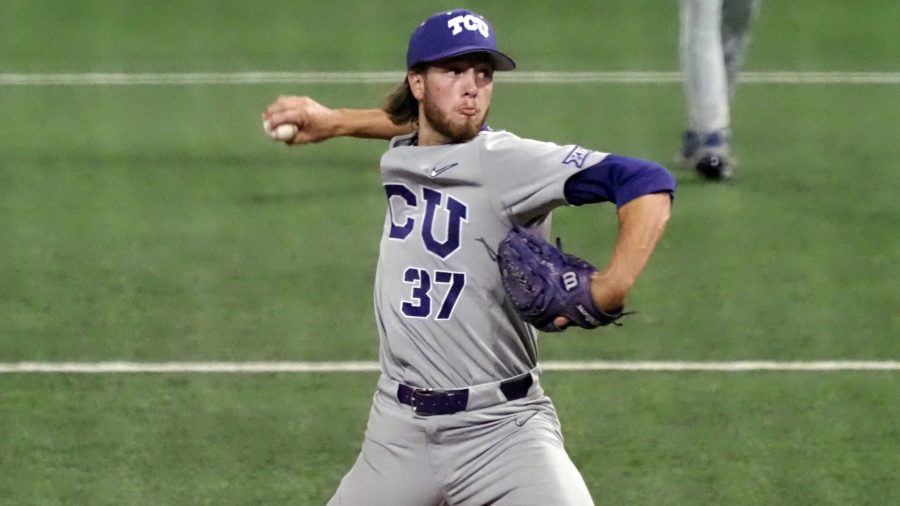 Relief pitcher Caleb Bolden gave up one run in 4.2 innings pitched as the Horned Frogs evened the series on April 10, 2022. (Photo courtesy of GoFrogs.com)

TCU has had a rough stretch as of late, losing six of their last ten games. Head coach Kirk Saarloos has said throughout the season that in order to win games, the Frogs need to limit mistakes.

Even though TCU lost two games this weekend, the team showed clear improvements against one of the NCAA’s top teams on the road.

Shortstop Tommy Sacco led the Frogs with six hits and three walks in the series. He reached safely in nine-consecutive plate appearances.

“It [confidence] can work negatively, like last year and then this year, he’s got off to a good start and just continued it,” said Saarloos. “We’re going to need him to continue to play good offense.”

Texas starter Pete Hansen tossed a complete game shutout, as Texas defeated TCU 2-0 in the opening game of the series.

This was the first time the Frogs have been shut out since June 2, 2019 (at Arkansas).

Hansen dominated on the mound, allowing two total hits. He controlled the strike zone as well, striking out 12 and only walking one batter.

The Frogs average over six walks this season.

Riley Cornelio, against a Texas offense that leads the Big 12 Conference in hits and home runs, gave up two earned runs through six innings. He allowed three hits, five walks, and struck out six batters.

The first run of the ballgame came in the 4th after the Longhorns walked and singled to start the inning. Cornelio was able to limit the damage with three-consecutive outs.

Cornelio continued to throw until the 7th but was pulled after giving up a double and walking a batter to start the inning. Relief pitcher Luke Savage took over on the mound and allowed one run, charged to Cornelio, after the Frogs couldn’t complete the double play to end the inning.

The Frogs didn’t make any clear mistakes throughout the game but couldn’t touch Hansen, who completed his first career shutout and struck out 12 batters.

TCU evened the series against Texas behind great performances from Sacco and relief pitcher Caleb Bolden.

After recording two hits on Friday, the Frogs started the game with two-consecutive hits on Saturday.

The Frogs struck first, as second baseman Gray Rodgers brought center fielder Elijah Nunez home with a ground ball to the right side. Sacco followed it up with a single up the middle, scoring third baseman Brayden Taylor.

Marcelo Perez, who has served as a reliever this season, started on the mound for the Frogs. Saarloos said that Perez earned the start after his excellent performance last saturday, where he threw 6.1 innings and gave up one earned run.

Perez, however, couldn’t keep Texas off the board; right fielder Murphy Stehly helped to chip away at the lead with a solo shot to left.

The Frogs continued their offensive onslaught in the 2nd. The bottom of the lineup, designated hitter Reed Spenrath and left fielder Porter Brown, both recorded hits to start the inning.

Third baseman Brayden Taylor then launched a three run home run to right center, extending the Frog lead to five. TCU had control of a comfortable lead, but against the Big 12’s highest ranked offense, their lead wasn’t safe.

The Longhorns continued to fight, making it a 6-4 ballgame in the 4th inning. Perez was replaced by Bolden, who kept the Longhorns off the board all the way until the 9th inning, when he gave up a solo shot to Campbell.

The Frogs had a runner in scoring position with no outs in four-straight innings but failed to bring a run home.

Saarloos said that the Frogs need to do a better job extending leads, especially against an offense as good as Texas’.

“If you let them [Texas] hang around and you don’t add on, next thing you know you have a 9th inning like that, where you don’t want it to be that stressful,” said Saarloos.

Although the Frog offense missed many opportunities, Bolden kept the Longhorn offense at bay. River Ridings recorded the save as the Frogs evened the series.

Sacco shined again, but the Frogs couldn’t keep up with the Longhorn offense on Sunday, losing the rubber game 7-3.

Brett Walker started on the mound for TCU and Lucas Gordon started for Texas.

The Frogs scored the first run of the ballgame in the 2nd after an impressive two out rally. Catcher Kurtis Byrne recorded a double and Sacco drove him in with a single, continuing his impressive play from Saturday.

The lead didn’t last long, as first baseman Ivan Melendez hit a go ahead two run home run, his 14th of the season. Melendez leads the Big 12 Conference in home runs with a four home run gap between himself and second place.

In the 4th, TCU tied the game after a wild pitch scored first baseman David Bishop.

In the 6th, Texas once again took the lead. Relief pitcher Luke Savage took over for Walker, who put two runners on, and gave up a single up the middle, giving Texas a 3-2 lead.

In the 7th, Luke Savage’s near 20 inning scoreless streak came to an end. He recorded two outs, but walked Texas shortstop Trey Faltine. Savage was pulled for Garrett Wright, who gave up an RBI double followed by an RBI single.

Taylor hit a home run in the 8th, his second of the series, to cut the lead to two.

In the bottom half, Ridings was sent out to attempt to keep the ballgame within reach. A soft grounder was hit to Ridings, and the Frogs had a double play opportunity. The Frogs failed to record an out, though, as Ridings made an errant throw to second.

The Longhorns then added two insurance runs. TCU did not respond, and they dropped their second Big 12 Conference series of the year.

TCU will look to bounce back against No. 24 Dallas Baptist on the road this Tuesday before facing Texas Tech in a three-game series at Lupton starting on Thursday.