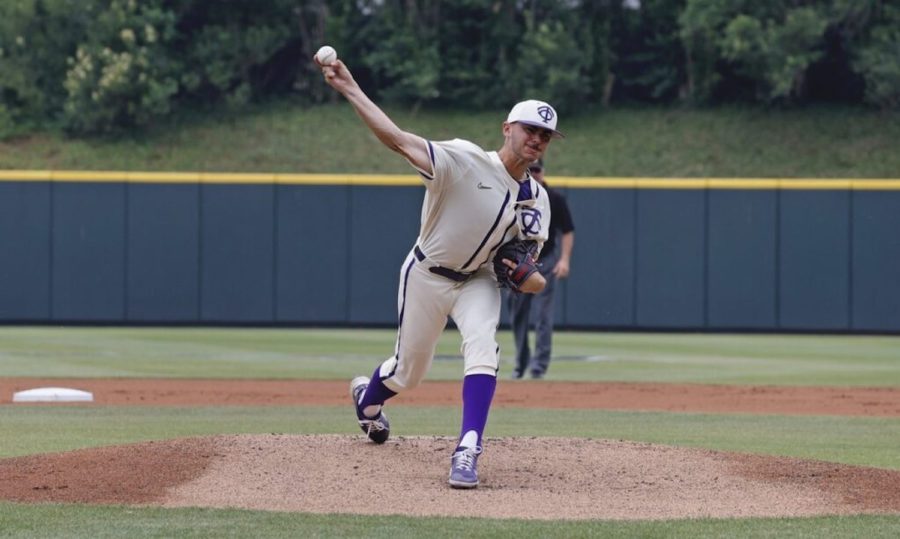 Starting pitcher Riley Cornelio strikes out nine batters, as the TCU Horned Frogs secured the series sweep against Santa Clara on May 21, 2022. (Photo courtesy of GoFrogs.com)

No. 24 TCU Baseball (35-18), while sweeping Santa Clara in a non conference series, has won the Big 12 Conference Regular Season Championship and will start the Big 12 Tournament as a No. 1 seed.

The Frogs had a 16-8 conference record going into the weekend. Texas Tech had a chance to surpass the Frogs but fell to Oklahoma in a weekend series. If the Sooners had swept, they would have shared the Big 12 title with TCU, but they lost the final game of the series.

The Horned Frogs had an up and down season, but, at the end of the day, they are champions. Associate head coach Bill Mosiello said that he was impressed with the team’s fight.

“It shows you how resilient the kids are,” Mosiello said. “We won big games at the right times.”

Head coach Kirk Saarloos said regardless of what happened in the middle of the season, he wanted the players to “keep pushing the gas pedal.”

“I couldn’t be more proud of our players,” said Saarloos. “Sometimes, when you go through adversity that’s really where you find true character. And we have a bunch of guys with a lot of character on our team.”

TCU, in a back-and-forth game, held on to defeat Santa Clara 7-6, securing the opening game of the series.

The Horned Frogs tallied 8 hits and 11 walks in a well-rounded team effort.

Second baseman Gray Rodgers gave the Frogs the lead with an RBI single in the second.

Pitcher Cam Brown started on the mound for the Frogs, throwing three scoreless innings. He loaded the bases in the fourth, and was replaced by pitcher Brett Walker, who gave up consecutive singles.

Although he was charged 3 runs, Brown has shown great improvements in his last few outings.

In the bottom half, the Frogs were able to tie the game with singles from catcher Kurtis Byrne and right fielder Luke Boyers.

TCU lost the lead in the sixth but responded with four runs of its own, with a flurry of walks and a single by center fielder Elijah Nunez.

Santa Clara chipped away at the lead, but relief pitcher Luke Savage limited the damage, picking up the save as the ballgame came to an end.

Designated hitter Bobby Goodloe gave the Frogs an early lead, driving in Nunez, who picked up his 100th career hit earlier in the inning, with a two-out double.

Mosiello said that Nunez’s ability to get on base “makes us [the team] go.”

“Eli’s been really good for the last few weeks,” said Mosiello. “Even when he’s not swinging it great… he adds huge value to an offense.”

Boyers also picked up his 100th career hit, starting off a big second inning for the Frogs. After one run was driven home by a fielder’s choice, third baseman Brayden Taylor hit his first triple of the season, scoring two more and giving the Frogs a 4-0 lead.

Porter Brown, who is batting .424 in the month of May, had an RBI single in the fourth and a three-run home run in the fifth. Brown had a rough start to the season, and received little opportunity to start games.

Mosiello said that Brown has been swinging it well.

“He’s an amazing kid,” said Mosiello. “No one deserves it [success] more than him.”

Byrne added the final Frog run in the sixth with a single up the middle.

Santa Clara, after Perez was pulled, cut into the lead, but could not catch up to the Horned Frogs.

Pitcher Riley Cornelio started on the mound, tossing six solid innings for the Horned Frogs. He gave up a home run but was dominant throughout, striking out nine batters.

Saarloos said that Cornelio’s curveball was working for him.

“[Santa Clara] did a good job this weekend in terms of laying off some balls from our guys, so that tells you how good Riley’s was,” said Saarloos.

The ballgame was fairly close until the sixth, where singles from Taylor and Byrne extended the Frogs lead.

Shortstop Tommy Sacco, on his birthday, hit 2 home runs, surpassing Taylor with a team high of 12.

Sacco has made a huge jump this season, becoming one of the league’s most feared hitters.

#TCU's @Tommy_Sacco25 made a huge jump this season.

Saarloos said that Sacco left his mark on the program as one of the best shortstops in school history.

TCU continued to add runs, and Santa Clara failed to respond as the series came to its conclusion.

The Horned Frogs are on a seven-game win streak. Sacco said the biggest thing going into the postseason is momentum.

“You can have all the momentum you want in the beginning of the season or midseason, but you really need it when you’re going to the postseason,” said Sacco. “That’s when you gotta play the best. We’re getting hot at the right time.”

The No. 1 seed TCU Horned Frogs will face the No. 8 seed Baylor Bears on Wednesday at 12:30 p.m. at Globe Life Field.