Big 12 Tournament Preview: Can the Frogs go back to back? 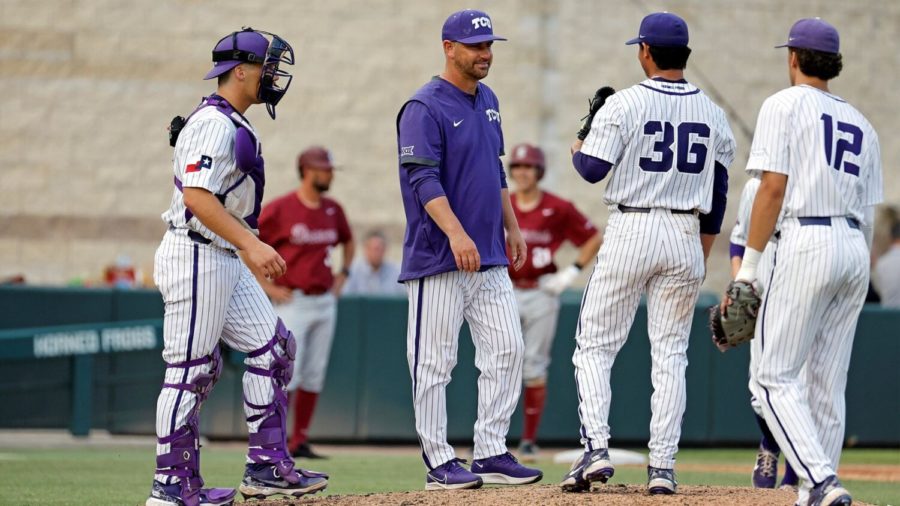 TCU Baseball head coach Kirk Saarloos talks to Marcelo Perez during a mound visit on May 20, 2022. (Photo courtesy of GoFrogs.com)

The top eight teams in the Big 12 Conference will battle it out in a double elimination bracket to determine the 2022 Big 12 Champion. The Frogs, who won last year’s tournament, have a chance to repeat.

The Frogs took care of business against three inferior opponents, ending the regular season on a seven-game win streak averaging 12.9 runs per game.

The offense is on fire, largely due to the improved production from the bottom half of the batting order. Left fielder Porter Brown, who is 16/36 (.444) with four home runs and 19 RBIs in his last 10 games, said his teammates have been calling him “Mr. May.”

“When school ends, I become a full time baseball player and don’t have to worry about school,” said Brown. “I live here at the field now and I’m not worried about classes. I’m doing a lot of extra hitting, a lot of extra work in the cages.”

Right fielder Luke Boyers, who has reached safely in 23-straight ball games, is also playing some of his best baseball of the season.

The Frogs, as a team, don’t hit for a ton of power but get on base with ease. Taylor and Nunez, in the Big 12 Conference, have on base percentages in the top 10 and also rank in the top five in walks.

To succeed in the Big 12 tournament, the Frogs will need to perform well throughout the entire batting order. Associate head coach Bill Mosiello said when TCU baseball is successful, “We’re good one through nine.”

“We’ll figure that out when we figure out who we play,” said Saarloos.

The Frogs know they will play Baylor University, the No. 8 seed in the tournament. The Frogs bested the Bears on the road this season, winning two of three in Waco.

TCU has a lot of options at starting pitcher, including Marcelo Perez, Cam Brown, Brett Walker, Austin Krob and Riley Cornelio. Depth is crucial in any postseason run and the Horned Frogs have a lot of it. Saarloos said the team is as “healthy as we’ve been in a long time.”

Win or lose against Baylor, the Frogs will play either OSU or Texas next.

Ivan Melendez (Texas) – The Longhorns’ first baseman, whose numbers this season are off the charts, was named the Big 12 Conference Player of the Year. He leads the Big 12 Conference in batting average (.421), OPS (1.472), RBIs (85) and home runs (28). The gap between Melendez and the rest of the field is extreme. He has 24 more RBIs and 12 more home runs than any other player.

Jace Jung (Texas Tech) – The Red Raider first baseman leads the Big 12 Conference in runs scored. He also ranks in the top five in OPS (1.152), RBIs (56) and home runs (14). He has a knack for getting on base, drawing the second most walks in the conference.

Peyton Graham (Oklahoma) – The Sooner shortstop does a bit of everything at the plate. He has a team-high 14 home runs, and he also has a solid .336 batting average. He ranks 4th in the Big 12 in stolen bases with 27.

No. 5 Texas and No. 4 Oklahoma State will kick off the Big 12 Tournament at 9 a.m. at Globe Life Field in Arlington, Texas.