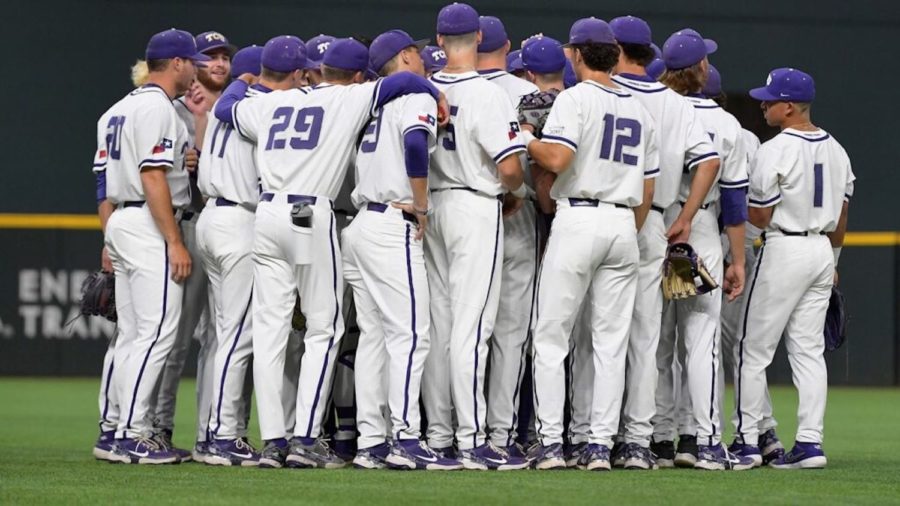 No. 18 TCU baseball has been eliminated from the 2022 Phillips 66 Big 12 Baseball Championship after losing to No. 9 Oklahoma State University 8-4.

Head coach Kirk Saarloos, who was ejected from yesterday’s game against Texas, was suspended for two games for not leaving the field in a timely manner and will miss the first game of NCAA regional play.

After arguing a balk call, Saarloos motioned to intentionally walk first baseman Ivan Melendez, the Big 12 Player of the Year.

“I think I should have been ejected if I let Ivan Melendez hit with a base open, you know?” said Saarloos. “I was just motioning to walk Ivan and they [the officials] saw it differently.”

Saarloos also argued a balk call in the Frogs’ victory against Baylor on Wednesday. After the game, he said he shouldn’t have done so and Christopher Griffin, the home plate umpire, got the call correct.

“I gotta stop doing that [arguing]. My blood pressure gets too high,” said Saarloos. “You get caught up in the heat of the game and the moment in a big situation.”

Saarloos added he’s a competitor like anyone else on the field.

“I’m always going to have the backs of our players,” said Saarloos.

In the opening round of the Phillips 66 Big 12 Baseball championship on Wednesday, the TCU Horned Frogs defeated the Baylor Bears 4-2.

Baylor pitcher Blake Helton kept the Frogs off the board for five innings before giving up two runs in the sixth.

“He competed really well against us,” said shortstop Tommy Sacco. “When he [Helton] shows cracks in his game that’s when you kind of take advantage like we did.”

“We [Byrne and Goodloe] got our pitch in the right situation,” said Byrne.

Brett Walker, starting pitcher for the Frogs, gave up two extra base hits in the first inning that led to Baylor taking an early lead.

Walker settled down but was charged with another earned run in the sixth inning after Caleb Bolden took over.

“He [Walker] did a really good job pitching on the inside half of the plate,” said Saarloos. “It [pitching in] opened up some of his off-speed stuff, got guys leaning out over the plate.”

In the bottom half, the Frog offense came alive, scoring its first run of the ballgame through base hits from Sacco, Byrne and Goodloe.

TCU then tied the game with a sacrifice fly from first baseman David Bishop. The Bears, who could have prevented a run if they had been quicker, were able to double up Goodloe at second, who didn’t get a good read on the ball.

In the bottom of the eighth, the Frogs took the lead on a wild pitch and Byrne added an insurance run with a single.

Closing pitcher Garrett Wright picked up the save, sending Baylor, who would later be eliminated by Oklahoma State, to the losers bracket.

The Frog offense tallied four hits as the Longhorns knocked them out of the winner’s bracket by a score of 5-3 on Thursday.

Marcelo Perez started on the mound for the Frogs, giving up a three-run home run to right fielder Murphy Stehly in the first inning.

Perez said that he didn’t let the early mistake faze him.

“It’s part of the game,” said Perez. “I missed my spot on that pitch. It was supposed to be a slider, down and away, and I left it down the middle.”

After this mistake, Perez dominated the Longhorn offense, keeping them off the scoreboard until he was relieved of his duties in the eighth inning.

Saarloos said that Perez has been huge for the Horned Frogs ever since entering the rotation and his performance helped save the Frog bullpen for future games.

“He [Perez] settled in and did a phenomenal job, especially in a tournament like this,” said Saarloos. “If you get to a loser’s bracket, like we now are, [Perez] going seven innings… It does a lot in terms of trying to find our way back out of the loser’s bracket.”

The Frogs, in the fourth, scored their first run of the ballgame thanks to an error by second baseman Mitchell Daly. TCU added a run in the sixth when shortstop Brayden Taylor brought home center fielder Elijah Nunez, who doubled.

In the eighth, a balk was called on relief pitcher Luke Savage that resulted in a run. Saarloos had a heated discussion with the home plate umpire, then motioned that he wanted to intentionally walk first baseman Melendez.

Saarloos was then ejected from the game and ran on the field to protest, which led to his suspension.

After the chaos subsided, Texas designated hitter Austin Todd added another run for the Longhorns with a single up the middle.

Second baseman Gray Rodgers cut the Texas lead to two with a home run in the ninth inning, but the Frogs failed to catch the Horns as the game concluded.

OSU scored in bunches, soundly defeating TCU 8-4 and knocking it out of the Big 12 Tournament.

The Frogs jumped out the gates quickly with a two-run first inning powered by base hits from Nunez, Taylor and Goodloe. TCU added to its lead in the next frame after a single from Nunez scored Garrison Berkley, who walked and stole second.

Riley Cornelio, starting pitcher for the Horned Frogs, was having control issues from the beginning. He was able to get out of two jams and kept the Cowboys at bay until the third, where he gave up a 450-foot home run to OSU designated hitter Griffin Doersching. Cornelio, who put two runners on that would eventually score, was pulled for Bolden.

OSU tallied four runs in the third and fifth innings. Sacco said the game came down to getting big hits at the right time, and TCU didn’t get enough of them.

“When you look at [OSU’s] side of the offense, you know, they got those timely hits in those big innings,” said Sacco.

The Cowboys, after taking the lead, did not allow another run, eliminating the Horned Frogs.

It is unclear whether TCU will host a regional tournament. Associate head coach Bill Mosiello said that he thinks TCU should host a regional, but it’s not up to him.

“We had to play in the great Big 12 and we won it outright,” said Mosiello. “To me, how are you [TCU baseball] not the host?”

The field of teams for the NCAA tournament will be announced on Monday.