Frogs will ‘take it one game at a time’: College Station Regional preview 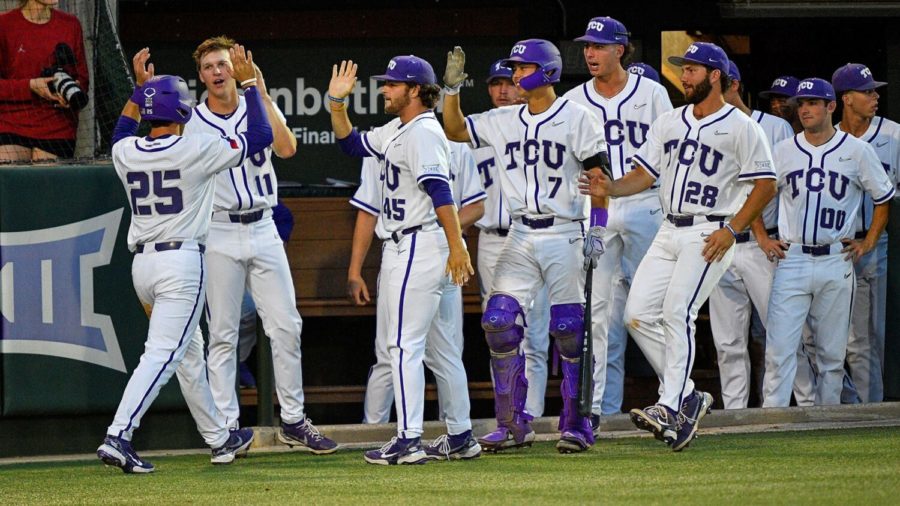 Shortstop Tommy Sacco scores and gives high fives to his teammates on May 26, 2022. (Photo courtesy of GoFrogs.com)

TCU baseball will travel to College Station as a No. 2 seed in the regional phase of the Division One Baseball Championship.

Although Texas and OSU did not win the regular season or the Big 12 Tournament, they had high RPIs, a metric that ranks teams based on the strength of schedule.

Associate head coach Bill Mosiello, after TCU’s elimination in the Big 12 Tournament, said the RPI is strange and confusing.

The last time the Big 12 regular season champion did not host a regional was Texas A&M back in 1998. Head Ccach Kirk Saarloos said that the Frogs would have loved to host in Fort Worth but the environment is fun wherever you go.

“The biggest thing for me was us being two and a half hours away, so our fans of TCU baseball don’t have to hop on a plane and can just jump in their car and come down and watch,” said Saarloos.

Although the drive will be manageable for some, the Frogs will be without many of their home fans and also, for the first game, their head coach. Kirk Saarloos was suspended for two games after he failed to leave the field in a timely manner after his ejection against Texas on Thursday.

Second baseman Gray Rodgers said the team will miss Saarloos’s presence in the dugout but that nothing else will change.

“We have a bunch of guys who can pick it up for him and we have a great staff and a ton of great guys who bring a ton of great energy in the dugout,” said Rodgers. “So, I think we’ll be just fine.”

The Horned Frogs facing some adversity is nothing new. Shortstop Tommy Sacco said that the experience gained from all the highs and lows will come in handy.

“I think it [experience] just really prepares us for anything that can be thrown at us,” said Sacco. “We know how to come back from a deficit, we know how to hold the lead.”

The Frogs have had their fair share of ups and downs, but will have a clean slate. Starting pitcher Marcelo Perez said that when the postseason comes around, every team has a fresh start.

“Playoff baseball is completely different,” Perez said. “It doesn’t matter what you did during the season. Everyone starts zero-zero.”

Cornelio, after dealing with pronate tightness, has been inconsistent. He does, however, have great potential to carry the Horned Frogs to victory. Cornelio had a stellar five game stretch during the heart of conference play, giving up six earned runs in 32.2 innings pitched.

Saarloos said that, as a two seed, it’s important to avoid moving into the losers bracket and the team doesn’t have the luxury of saving arms for the future. They’ll trust Cornelio to get the job done in game one.

“Riley has had flashes this year of being a true ace,” said Saarloos. “We don’t win the Big 12 Regular Season without that month-long stretch of Riley dominating as a starting pitcher.”

The Horned Frogs took two of three against Louisiana last season, but of course, 2022 is a different year.

The Ragin’ Cajuns have missed the NCAA tournament for six seasons, but secured an automatic bid by winning the Sun Belt Conference tournament. They are on a five-game win streak heading into the tournament, while TCU has lost its last two.

The Frogs have a lot of history with Texas A&M and Jim Schlossnagle, former TCU baseball head coach, but are focused on game one against Louisiana.

“We gotta take it one game at a time, you know?” said Sacco. “Who knows we may not even play them.”

Perez said that the possibility of facing Schlossnagle adds a bit of spice to the regional but emphasized that both A&M and TCU have to take care of business.

“Our heads will definitely be [on] beating Louisiana first and we’ll see what happens after,” Perez said.

Saarloos said if the matchup happens, TCU will be facing A&M, not Jim Schlossnagle. He added there’s no guarantee the game will happen, but that it’ll be fun if it does.

“When and if that matchup happens, it’s going to be a great opportunity,” said Saarloos. “Two great, Texas programs going after one another that have some history in postseason play. If you’re a college baseball fan you can’t wait for that matchup.”