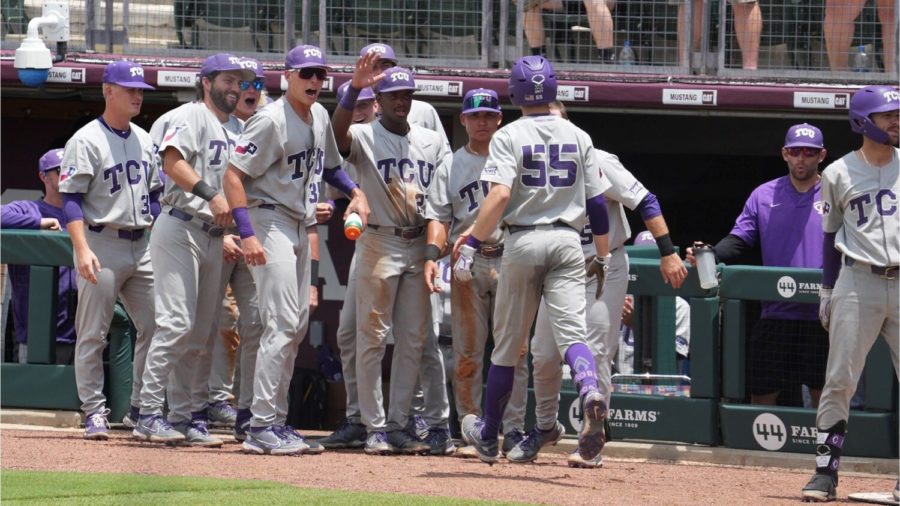 TCU baseball, which lost its first game of the College Station Regional to Louisiana, kept its hopes of moving on alive by defeating Oral Roberts 3-1 in an elimination game.

The Horned Frogs, who have to win three straight games to avoid being sent home, will face Louisiana on Sunday at 1 p.m. If they win, they’ll face Texas A&M and their former head coach, Jim Schlossnagle. TCU has faced many challenges this season, but what lies ahead of the team is the toughest.

Sloppy defense and inconsistent pitching were TCU’s downfall in its first game of the College Station Regional, where the Frogs lost to Louisiana 7-6.

Cornelio dealt with control issues from the start, walking two batters in the first inning. Catcher Kurtis Byrne got him out of the jam, throwing a runner out of third base.

After hitting a batter, Cornelio gave up back-to-back deep home runs with two outs secured, putting the Frogs in a hole early. He settled down after, throwing three scoreless innings and keeping TCU within striking distance.

The Frogs’ middle infield got things rolling in the third inning. Shortstop Tommy Sacco, after a double from second baseman Gray Rodgers, put TCU on the board with a two-run home run.

In the fifth, Byrne gave the Frogs the lead with a two-out single but was thrown out trying to take second.

The Ragin’ Cajuns got to Cornelio in the sixth inning, scoring a run and tying the game. Savage took over, giving up a go-ahead RBI triple, charging a run to Cornelio.

Associate head coach Bill Mosiello, filling in as head coach due to Saarloos’ suspension, said that Cornelio competed and kept the Frogs in the ballgame but “wasn’t close to the Riley Cornelio that we needed to win a game against a really tough club.”

The Frogs, due to a home run from left fielder Porter Brown and a double from first baseman David Bishop, tallied a run in both the seventh and the eighth innings.

Defense prevented TCU from securing the lead, as third baseman Brayden Taylor and relief pitcher Drew Hill both made throwing errors that resulted in runs.

The Frogs failed to respond and moved to the losers bracket. Mosiello, after the ballgame, said that the message to the team was for them to keep their heads up.

“These are the guys you want to go to war with,” said Mosiello. “This is a resilient group, as soon as you think they are not very good they come out playing. This is a good group of kids, and it is fun to be around these guys. Tomorrow is going to be a fun day.”

Facing elimination, the TCU coaching staff selected starting pitcher Marcelo Perez to fight to keep the season alive. Saarloos said he was trusting guys who have “been in this situation before.”

Following two scoreless innings from both ball clubs, the Horned Frogs took the lead in the third inning with an RBI double from Sacco.

Perez was pulled in the fifth after loading the bases and was replaced by Caleb Bolden, who threw a wild pitch that resulted in Oral Roberts tying the ballgame.

Perez, in what was possibly his final game as a Horned Frog, threw four and two-thirds innings, allowing one run and striking out five.

With two outs in the sixth, Taylor and Byrne showcased their power, hitting back-to-back home runs to retake the lead. Taylor finally got a ball past Oral Roberts center fielder Connor Beichler, who robbed him of extra bases twice earlier in the game with spectacular diving catches.

“I was just glad I could finally hit it over him and not at him,” said Taylor. “Sometimes you just have to tip your cap to him [Beichler]. He made a pair of awesome plays and there was nothing I could do about it.”

Brett Walker, who is usually a starter, began the bottom half of the seventh inning by allowing two base hits. After only six pitches, he was pulled for Augie Mihlbauer, who picked up a strikeout before getting pulled for relief pitcher Garrett Wright, who ended the scoring threat.

Saarloos said he wanted to bring Wright in the game to hold the lead.

“That was the biggest point in the game, and I wanted to bring in Garrett in that situation against the middle part of their order,” said Saarloos. “We saw what happened after that.”

Oral Roberts Head Coach Ryan Folmar said that TCU’s bullpen is “for real” and that their matchup pitchers make them effective.

“Right-handed, left-handed, breaking balls, angles, whatever you want, that is a tough bullpen to play against,” said Folmar.

Wright went on to pick up an eight-out save to keep TCU’s season alive.