“We are redefining our culture”: TCU Volleyball enters a new era 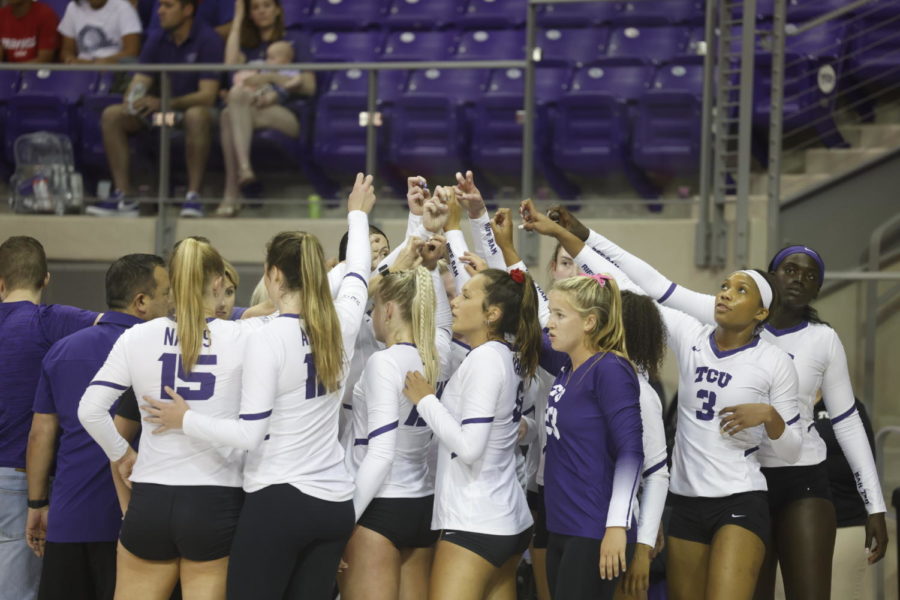 TCU vs Texas volleyball in Fort Worth, Texas on April 16, 2022. (Photo/Sharon Ellman)

TCU Volleyball, for the first time in recent memory, has a chance to be competitive in the Big 12 Conference.

TCU, throughout the last three seasons, has struggled in conference play, winning nine total matches. The Horned Frogs ended the 2021 campaign last in the Big 12 with a 2-14 conference record.

“My goal is to take TCU [Volleyball] to a place it has never been before,” said Williams.

Seven Horned Frogs signed to the 2022 recruiting class, one of the best in program history, giving TCU Volleyball a promising future. Outside hitter Jalyn Gibson, middle blocker Sarah Sylvester, and setter Carlee Pharris were named to PrepVolleyball.com’s Top 150 players from the class of 2022.

Although it may take some time for the Frogs to catch up to the conference powerhouses, the new additions, along with solid returning players, give TCU Volleyball the opportunity to reach newfound levels of success.

Defensive specialist Cecily Bramschreiber, returning for her sophomore season, said that TCU Volleyball is in the process of switching to a winning mindset.

“We were comfortable,” said Bramschreiber, reflecting on the 2021 season. “We were almost content with not winning.”
Meeting the standards for excellence
During William’s time as an associate head coach at Baylor, the Bears consistently finished near or at the top of the Big 12 standings. Additionally, they had success in the NCAA Tournament, making a Final Four appearance in 2019.

Williams said the key to TCU Volleyball reaching that level of success is through raising their standards and not tolerating falling short.

Williams knows the level of sacrifice, dedication, and persistence required to play at a championship level and said that the team needs to believe that there is no limit to their success in order to achieve their goals.

“They’re good enough to win the Big 12,” said Williams. “I’m going to foster and cultivate the belief and the culture, but for us to get there, the players have to start believing as well.”

Williams made his expectations clear from the moment he stepped onto the practice floor, telling the team they needed to “buy in” if they want success in postseason play.

“He [Williams] has the experience, he’s done this before,” said Bramschreiber. “It’s really just up to us to buy into [the process].”

The new standards have pushed the team out of their comfort zone, helping the squad make progress in the right direction.

“The new expectations [the coaching staff] have brought to the gym have been much higher than what some of us are used to, which is really good,” said Bramschreiber. “Hopefully, that’ll push us to the next level.”
Embracing the process
When it comes to creating a championship team, preparation and training are key. Bramchreiber said that the process, compared to the last few seasons, has gone through a complete overhaul.

“Our whole strength and conditioning has changed, our practice plans have changed, everything is fast paced, and we’re getting a lot more done,” said Bramschrieber. “It’s just all so different.”

Williams, who emphasized that he wants the team to have program first and servant leadership mentalities, said that the team will be “doing things the right way” in order to compete at a high level and that results will be a byproduct of the process.

“We’re going to be fast, powerful, and exciting,” said Williams. “It’ll be a fun game to come watch at the Scholl.”
Familiar and fresh
The Frogs have a handful of productive returning players but also some new faces that are set to make an impact on the court in 2022.

Outside hitter Julia Adams, who is returning for her senior season, led TCU with 285 kills in 2021. She was named to the All-Big 12 Preseason Team.

The Horned Frogs are also returning Junior outside hitter Taylor Raiola, a versatile, dual threat who averaged 2.89 kills and 2.14 digs per set.

With record setting defensive specialist Danni Dennison graduating, Bramschreiber, who tallied 212 digs in 2021, will take on more defensive responsibility. In addition to Bramschreiber’s passing, her elite jumping ability will allow her to receive backrow hitting opportunities, adding more variety to the Frog offense.

TCU’s front row struggled in 2021, finishing last in the Big 12 in hitting percentage and second to last in blocks. However, a handful of new faces have a chance to make a positive impact immediately, including Georgia transfer Lyric Stewart, who averaged two kills per set last season.

“[Stewart] is an elite level terminator,” said Williams. “We brought her in to compliment the returning players and to give us more power, more speed, and the ability to score more points.”

The Frogs are also adding freshman outside hitter Jalyn Gibson, who Adams said has been impressive thus far in practice.

“I see a lot of potential in [Gibson],” said Adams. “I can already see how she’s growing as a person and player just in the few weeks she has been here.”

In total, the Frogs are adding eight new players to the roster, who all have had success at the high school, club, or college levels. When announcing the 2022 class, Williams said he was “beyond thrilled”.

“This class will help set the stage for what TCU Volleyball will look like moving forward and I think everyone who has been able to get to know them and their commitment level is super excited and enthusiastic about our future,” said Williams in a press release.
Strength in togetherness
TCU Volleyball, prior to the start of the season, will focus on adapting to new standards, mindsets, and routines. Even with new faces added into the mix, William’s said that the team is already on the same page.

“That [cohesion] is a huge strength,” said Williams. “A lot of times, when there is change to a coaching staff, there may be issues in the locker room. We don’t have that.”

TCU Volleyball players and coaches share the same desire and commitment to create a winning environment, but there is one important piece of the puzzle they can’t control: the crowd.

Bramschreiber said that Frog fans, with their support, provide an adrenaline rush that affects the team’s performance on the court.

“I don’t think our fans know how big of an impact they have on our energy on the court,” said Bramschrieber. “When you have that whole supporting body behind you it just makes it that much more fun.”

Even during a losing season, TCU Volleyball set an attendance record with 4,012 fans against Baylor on November 13, 2021 with Williams, sitting on the opposing bench, in attendance.

“They [the team] are going to feed off that energy,” said Williams. “Schollmaier is a great arena for volleyball. The engagement of the crowd can help.”
Looking ahead
Williams said that the Frogs have “dreams of winning the Big 12.” Regardless of if they succeed or not, they will have met their goal if they continue to “do things the right way.”

Change won’t happen overnight, but with a newfound mentality, the team is on the right path. With a new outlook on the process, there is no longer a limit to their success.

TCU will kick off their season on Aug. 19 at 5 p.m. in Charleston, South Carolina against the College of Charleston.