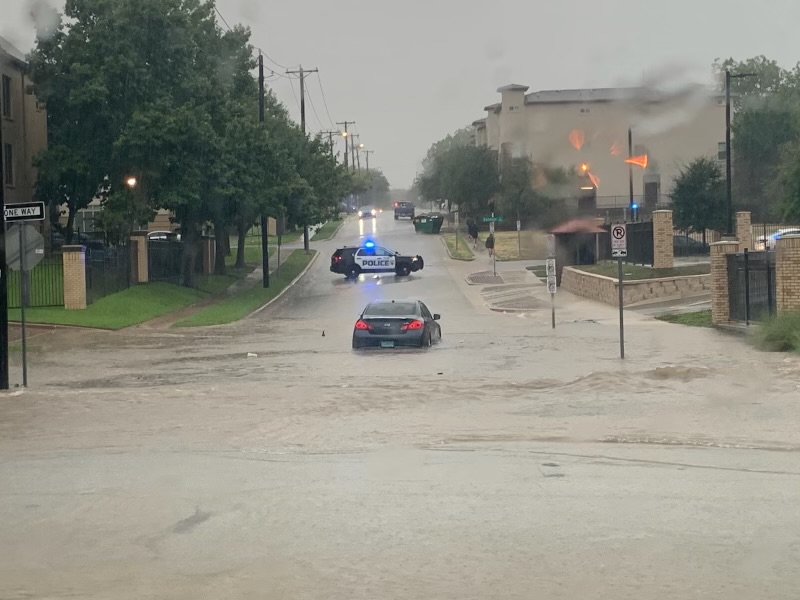 A car is submerged in water At Berry Street and McCart Avenue.

Halley Costello, first-year marketing major, pictured her first day of class at TCU differently. She was excited and nervous, but she didn’t expect to face extreme weather.

Her shoes got “water logged” as she slogged along flooded sidewalks on her route from Foster Hall to her first class in Neeley School of Business.

After a summer of sweltering heat, heavy rains flooded roads, knocked out power on the west side of campus and caused flooding in Sid Richardson and the basement of Neeley. By 11:31 a.m. up to three inches of rain had already fallen. The expected rainfall rate is 1.5 inches per hour. The first day celebration moved to the Brown Lupton University Union. The event will last until 1:30 p.m. for those who can safely attend.

Costello waded to Moudy South — without an umbrella.

By the time she made it to her 10 a.m. class her backpack was soaked and her laptop was in a puddle of water.

It turned on, but immediately shut off.

“I went to the bathroom and I cried,” Costello said, who’s waiting out the rain to take her laptop to the Apple Store.

The heavy rains left multiple cars submerged at Berry Street and McCart Avenue and near the intersection of West Berry Street, Sandage Avenue and Merida Avenue around 11 a.m.

TCU Alert sent out an email at 11:45 a.m. urging students and faculty to be cautious, avoid flooded roads and not attempt to cross high water. At 12:40 p.m. an email from the university said students should contact their instructor if they are unable to make it to class.

A flash flood warning is in effect until 1 p.m. in Tarrant County. A 40% chance of showers and thunderstorms is expected tonight, mainly after 1 a.m.

“Classes continue only for those who can make it safely,” the email read.

John Freeny, a senior marketing and entrepreneurship major woke up in his off-campus house without power.

“It’s more of an inconvenience rather than terrible,” Freeny said, whose first class is Tuesday.

Piper Winsett, senior psychology major, left her apartment in Clearfork around 8 a.m. for her 9 a.m. class.

“Driving was a nightmare,” Winsett said. “It took me forever to get to class because I drove at 15 mph the whole way.”

When she got out of class at 10 a.m., Winsett saw cars on Berry Street submerged in water. She parked on Waits Avenue and sat in her car for an hour and a half before moving to the Jack in the Box parking lot on West Berry Street to walk to Common Grounds and wait out the rain and flooding.

A 50% chance of showers and thunderstorms is expected for Tuesday.