Colorado preview: Can the Frogs start the Sonny Dykes era with a victory? 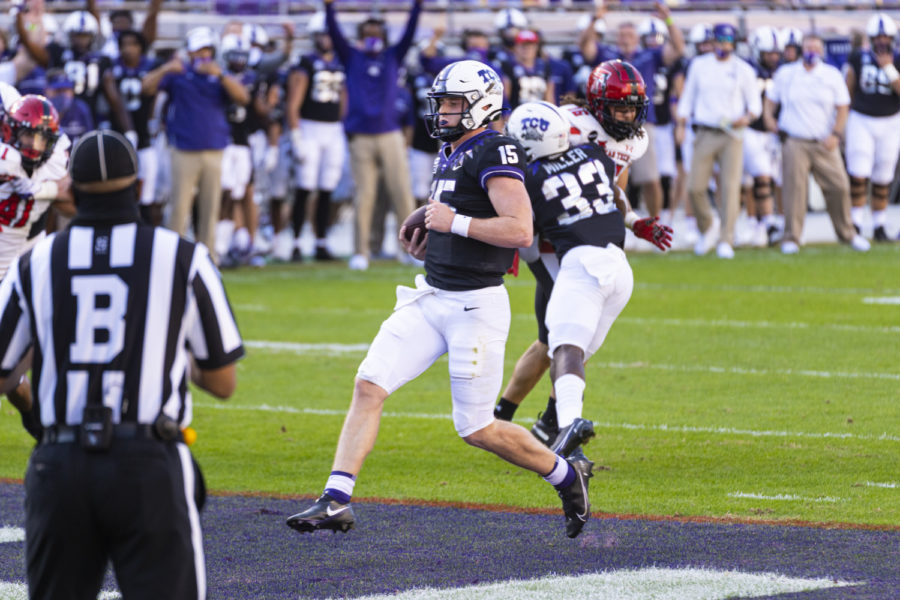 The Sonny Dykes era in TCU football will open in Boulder, Colorado.

While it will be TCU’s first matchup against Colorado on the football field, it will be Dykes’ third. He has a 1-1 all-time record against the Buffaloes as a head coach for the Cal Golden Bears.

Dykes said in an interview on Monday that he plans to use all three quarterbacks on Friday, and there is no certainty who will take the first snap.

Returning wide receiver Quentin Johnston has been putting in extra time outside practice to work on catches and timing.

“With all three quarterbacks, you never know who’s going to rotate in,” Johnston said.

Another Horned Frog familiar with Colorado is safety Mark Perry. He transferred to TCU this year after playing in Boulder for his first three years.

“It helps having someone that was there who knows the personnel,” said safeties coach Paul Gonzales. “Mark has done a nice job helping us on our end and also helping the offensive staff.”

Another transfer, running back Emani Bailey, is looking to take the field for the first time as a Horned Frog.

Bailey transferred from Louisiana but graduated from Denton Ryan High School, about an hour away from TCU.

Dykes has been adamant about making TCU appealing for players from the metroplex, even marking the school as “DFW’s Big 12 team.”

“Recruiting is a big deal, especially here in the backyard,” said Gonzales. “If guys want to play close to home… and allow their families to see 80% of their games, this is the best place for them.”

“It’s a blessing [to be able to play close to home], my mom loves it,” said Bailey.
A sneak peek at the Buffaloes
Colorado’s head coach didn’t announce their starting quarterback either.

The Buffaloes finished fifth out of six teams in the southern division of the PAC-12 with an overall record of 4-8. One of their 6 in-conference losses was to the Cal Golden Bears. The Golden Bears, who lost 34-32 to TCU in the week one of the 2021 season, beat Colorado 26-3.

Much like the Horned Frogs, the Buffaloes struggled outside of Folsom Field, dropping all four road contests in 2021.

But the Buffaloes took advantage of the transfer portal. They acquired graduate wide receiver R.J. Sneed II from TCU’s Big 12 rival Baylor. In five seasons with the Bears, Sneed tallied 133 catches and 1,564 yards with eight touchdowns. If he is healthy enough for the competition Friday, he will be someone to look out for.

Senior running back Ramon Jefferson transferred in from Sam Houston State where he tallied 1,904 yards in 299 carries and 22 touchdowns.

And Colorado’s leading tackler last season was senior safety Isaiah Lewis, who recorded 68 along with two interceptions. He will surely be the counterpart to former teammate Mark Perry, who will take over safety duties on the Horned Frogs defense.
Award watch going into the 2022 season
TCU’s Max Duggan is on the watch list for the Johnny Unitas Golden Arm Award. The award honors the nation’s top senior or upperclassman quarterback.

Duggan is fifth on TCU’s list of passing yards with 5,920 and set career highs in completion percentage and number of touchdown passes completed (63.9% and 16, respectively.) Duggan accomplished this despite losing playing time to Chandler Morris toward the end of the season.

He was the first Horned Frog to throw four touchdowns in a game since Kenny Hill had five in 2017 against Kansas.

TCU announced that seven Horned Frogs are on watch to appear in the Senior Bowl.

On the list is offensive lineman Steve Avila, who earned first-team AP all-Big 12 honors in 2021; safety Millard Bradford, who placed fourth on the team in tackles last season with 52 and recorded a team-high seven tackles against Iowa State; and cornerback Noah Daniels, who has battled injuries throughout his tenure, but was graded by Pro Football Focus as one of the best cornerbacks in the nation after 2020.

In addition, running back Emari Demercado was listed after returning for his sixth year in college and fifth year at TCU despite the coaching change. Demercado had a standout season in 2021, setting career highs in total yards in a game and yards in a carry.

“It just felt right to stay here… and I’m able to help the younger guys because I have that veteran experience,” said Demercado.

Tre’Vius Hodges-Tomlinson made the list, earning first-team all-Big 12 and first-team AP all-Big 12 in 2020 and 2021. Tomlinson was also listed on the College Football Freaks List (No. 57), which spotlights players in a program who have unique physical abilities to generate buzz.

Defensive lineman Dylan Horton joins Tomlinson on both the Senior Bowl watch list and the Freaks List (No. 17). Horton led TCU with 9.0 tackles for a loss and tied the team lead with 4.0 sacks. He tied the team high for tackles with eight, including two for a loss, in the notorious 30-28 win over Baylor last season.

Linebacker Dee Winters concludes the Senior Bowl watch list. Winters earned the Athlon Sports Defensive Freshman of the Week Award in 2019 versus Purdue. He closed the 2021 season with 167 stops, the most among current Horned Frogs.

Johnston is on the Freaks List (No. 23) and on the watch list for the Maxwell Award, Biletnikoff Award, Walter Camp Player of the Year and the Earl Campbell Tyler Rose Award.

The latter award, named after Tyler, Texas native Earl Campbell, is given to the nation’s best offensive player who was born in Texas, graduated from a Texas high school or plays at a college in Texas.

Johnston’s fellow wide receiver Taye Barber made the list, accompanied by running back Kendre Miller.
Moving forward
TCU is coming off of a 5-7 season in 2021, with a 4-3 home record and a dismal 1-4 record on the road.

Coming into week one of 2022, the players have shared the feelings of confidence and positive energy buzzing through the locker room.

The quarterback situation will be the hot topic after the first game against Colorado, but it will give new head coach Sonny Dykes the ability to see where the players fit in and mesh together.

Kickoff for TCU vs. Colorado will be at 9 p.m. CST on Friday and will be aired on ESPN.