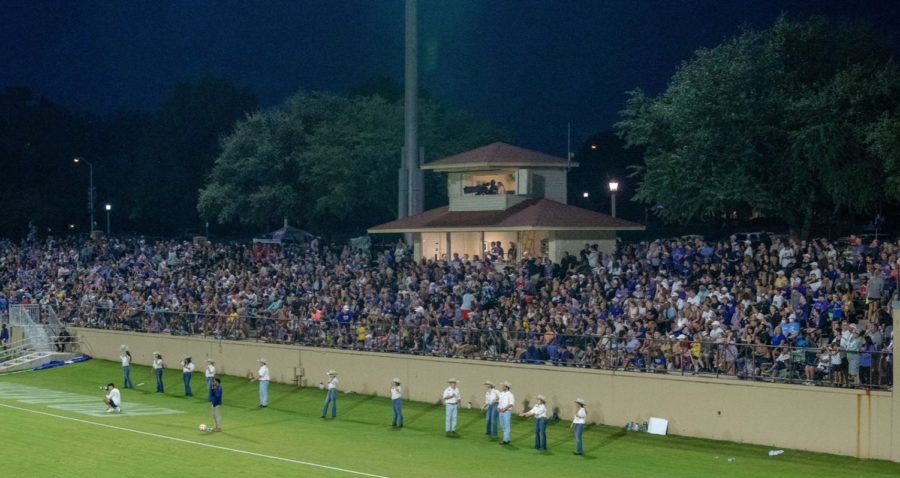 3,648 fans came to the Garvey-Rosenthal Soccer Stadium to watch No. 6 TCU battle No. 2 Duke University.

“That is what we have been able to create,” head coach Eric Bell said in response to the record-breaking crowd at the Sunday night game.

Duke sophomore forward Michelle Cooper scored an unassisted goal in the 10th minute of the contest. The Horned Frogs kept the Blue Devils at bay, remaining one goal behind for the remainder of the first half.

In the second half, Cooper scored another unassisted goal, and forward Kat Rader, assisted by midfielder Devin Lynch and Cooper, added another in the 60th minute.

Horned Frog sophomore forward Lauren Memoly cut into the lead with a goal, assisted by forward Messiah Bright and midfielder Oli Pena. After, the Horned Frogs were unable to gain enough momentum to charge back into the contest.

Prior to this game, Duke had only given up six corner kicks all season. The Horned Frogs tallied 11 corner kicks against Duke on Sunday night, with first-year forward Seven Castain taking 10 of them, but were unable to capitalize.

Bell added the team needs to review the video regarding the miscommunication that led to two Blue Devil goals.

Bright kept Duke on their toes defensively throughout the game, finishing with three shots and one assist.
Looking ahead
TCU is set to play No. 18 Texas A&M (4-0-1) in College Station on Thursday night at 7 p.m. CST.

The Aggies are undefeated in their home stadium.