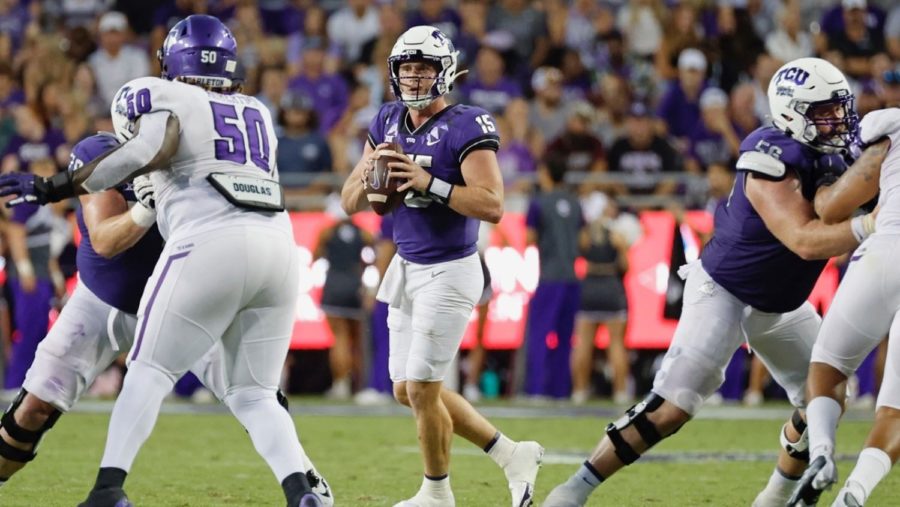 The Frogs shared the ball throughout the depths of their roster, getting to their fourth-string quarterback in Josh Hoover. TCU recorded 66 different participants.

This came from being able to hold onto the ball and convert on third and fourth downs, giving them more opportunity to score and extend the lead.

“We hadn’t turned over the ball until the end of the game – that was the first time we turned it over this year,” said head coach Sonny Dykes in his post-game presser.

The single turnover Dykes talked about was a fumble on the Tarleton one-yard line late in the fourth quarter, which Tarleton picked up for a touchback.

A clear pick for player of the game was quarterback Max Duggan, who threw for a career-high 390 yards and five touchdowns. The praise for Dugan flowed in during the post-game presser.

“Max played exactly how we expected him to,” said Dykes. “He made good decisions … and looked like a guy who was making his 30th start.”

“[Duggan] can do everything, he can throw, run, whatever he wants,” said freshman wide receiver Jordan Hudson. “He’s like superman.”

Dykes mentioned that Duggan got the ball to the guys who could make plays. One example was Hudson, who Dykes commended on his mentality.

“He’s got that mentality that great receivers have that if the ball is in the air, it’s his ball,” said Dykes.

Hudson had a day, himself, leading the team with five receptions against the Texans, including a touchdown.

Redshirt-freshman Sam Jackson took over QB duties for a drive with 10:17 left in the first half. He threw for 58 yards and ran in a touchdown after a 2 minute, 30 second drive to put the Frogs up 35-7.

Tarleton’s offense showed small signs of life in the pass game. Wide receiver Darius Cooper caught a 21-yard touchdown in the second quarter and then Tarleton moved down the field in the first drive of the second half.

After a few deep passes, Tarleton’s running back Deangelo Rosemond ran the ball in for a touchdown on a 1-yard carry. Tarleton’s final points came from a 47-yard field goal with 2:36 left in the third quarter.

Despite all the passing, TCU’s last points were scored via the run game. Running back Emani Bailey ran for 37 yards to put the score at TCU 59, Tarleton 17.

Punter Jordy Sandy has a deal with the Hope Center for Autism charity here in Fort Worth; every punt he kicks that lands within the 20 yard line, Sandy donates $20. Against Tarleton, Sandy came two minutes away from not getting off a single punt.

In case you missed it, there were plenty of upsets coming out of college football on Saturday. Duggan said he wasn’t so much aware of it, instead they were focused on their own level of play. However, it sounds like Dykes put it in the heads of the players as motivation right before the game.

“Coach Dykes told us right before we ran out that there had been a lot of upsets, so let’s make sure that’s not us,” said center back Josh Newton. “We came out with a win.”