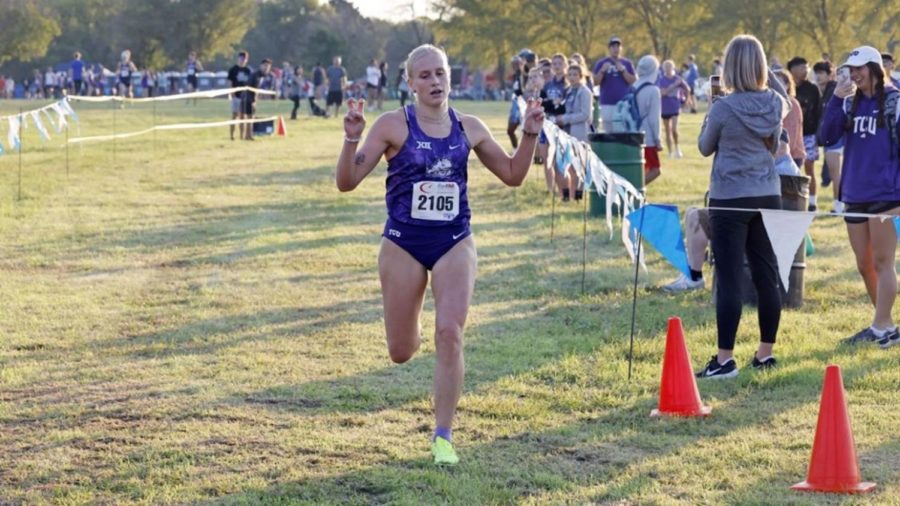 TCU returned to Lynn Creek Park to compete at the UTA Gerald Richey XC Invite where both the men’s and women’s teams took second place.

Junior Gracie Morris, who transferred from UT last year, got her first taste of cross-country season in purple. She took gold with a time of 17:11.5 (5:31/mile).

“Cross country has always been hard for me, but today was a lot better mentally for me,” said Morris. “I felt a lot more confident and I’m happy with how it went today.”

Morris’ cross-country debut for the Horned Frogs was last week at the ACU Naimadu Classic, where she finished first for the team in a time of 13:52.8 for a 4k (5:35/mile) and third overall.

Assistant Coach Roger Cooke said Morris “goes into every race with an eye of the tiger mentality.”

That mentality was seen last year when Morris made her way through the track postseason after breaking three school records and finishing with an Honorable Mention at the NCAA outdoor championships.

Close behind was sophomore Mariana Martinez, who didn’t compete during track season because of an injury. However, she came back strong and finished 6th overall with a time of 18:21.1 (5:53/mile).

After Morris and Martinez, the Frogs finished one after the other, filling places 9-15.

That rounded out the scoring for the team because the top five runners for each team are scored and the next two are placeholders to make the next runner’s score higher.

TCU finished second with a score of 37, behind SMU who scored 21. Out of the top 15 runners, 14 were either from TCU or SMU, which means the entire scoring teams of both schools finished before a runner from another school could cross the line.

All ten of TCU’s runners finished in the top 25, including four in the top 10.

“It was exciting,” said Martinez. “This year we’re a lot stronger than last year and I think we have the potential to qualify for nationals.”

With no seniors on the roster for the women’s team, they seem poised to have at least two seasons where they can develop together and gain some synergy to be competitive down the road. They also have to look forward to the addition of London Culbreath, another big-name transfer.

Culbreath went to Arkansas after graduating from McKinney North High School near the DFW metroplex. There, she won the Gatorade Texas Cross Country Athlete of the Year three times and gold medals in nine state championship races.

She transferred to TCU after spending two years (and one year of eligibility) in Fayetteville.

“If we can get two more young ladies like Gracie and London, we’ll have a pretty solid team,” said new Head Coach Khadevis Robinson. “We can be one of the top teams in the region.”

The women’s and men’s teams will compete at the Texas A&M Invitational on Friday, September 16th.