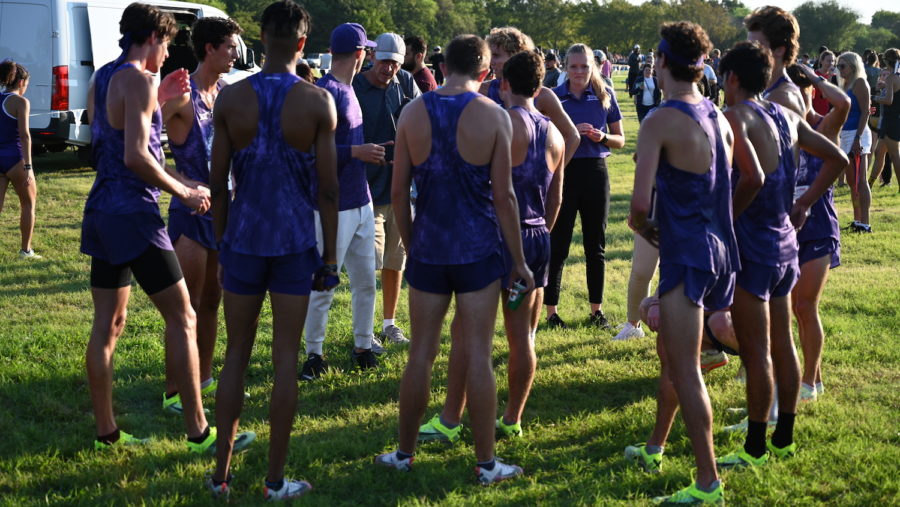 Coaches Robinson and Cooke brief the men's cross country team after they placed second as a team at the UTA Gerald Richey Invite. (Micah Pearce/Staff Photographer)

With TCU’s top cross country runner Lakelin Conrad graduating, sophomore Stone Burke has taken it upon himself to claim the top spot in 2022.

“It’s tough to lose a leader like Lakelin… but we’re a team so no one really cares who the top spot is,” said Burke. “We all want to be together.”

Riley’s performance improved his personal record by 22 seconds, a 16:17.3 that he ran last year at the UTA meet.

The last few Frogs crossed the finish line with the top 37 including two who finished within five seconds of Diaz.

Burke said the team is still working on running together as a pack during races. One of the biggest ways to measure pack-running is the 1-7 split. TCU’s first runner crossed the line at 15:29 and their seventh runner crossed at 16:47, giving them a 1-7 split of 1:16. In comparison, the team who beat the Frogs, UTA, had a 1-7 split of :35.

“A couple of our guys ran well, Stone [and Finn] ran really, really well,” said Robinson. “But for Roger [Cooke] and myself, that’s what we expect.”

One of the biggest additions to the men’s side is first-year Graydon Morris, brother of junior Gracie Morris, who transferred to TCU a semester after his sister did from Texas.

Graydon Morris graduated from Aledo High School, about 19 miles from TCU, where he became only the second male to qualify for the Foot Locker Cross Country Championships four times. He accrued three state titles in track and field and three more in cross country.

After high school he went to the University of Texas, where he ran one season and finished 17th at the Big 12 Cross Country Championships. He ran indoor and outdoor track for the Longhorns before getting injured and sitting out. Then, he made the move back home.

“Getting back close to home I feel like I can relax more… I’ve been able to focus more on getting healthy,” said Graydon Morris.

Gracie Morris had her own injuries while at UT, which drove her to transfer. That was one of the deciding factors that convinced Graydon to do the same.

“I saw how well she was taken care of [at TCU],” said Graydon Morris. “They ultimately allowed her to get to nationals, the highest level of NCAA track, and I wanted to be a part of that.”

Robinson is excited for Graydon to return, as well, saying, “it will be a huge boost for our men’s team.”

The men and women’s teams will travel to College Station to compete at the Texas A&M Invitational on Friday, Sept. 16.