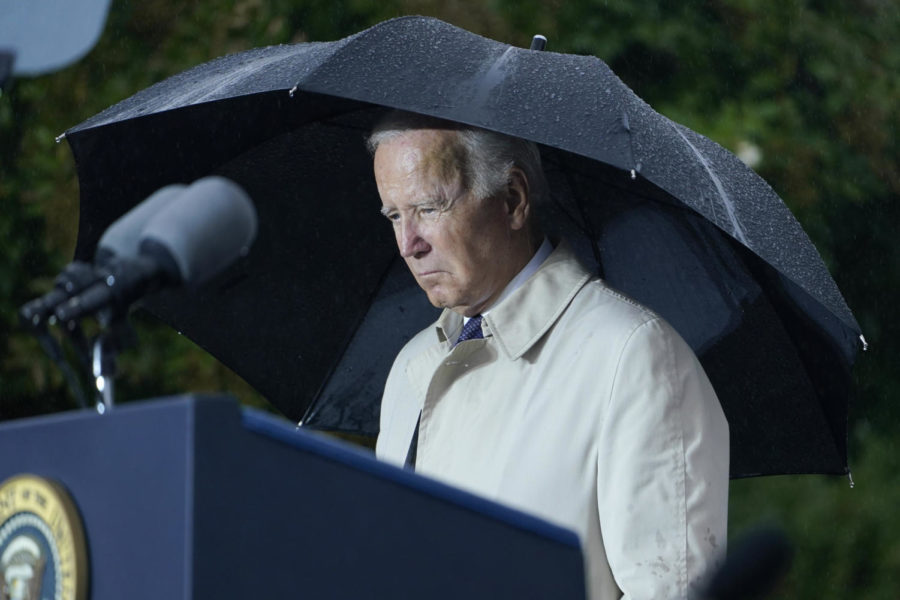 President Joe Biden honors victims of the 9/11 terrorist attacks during a ceremony at the Pentagon in Washington, Sunday, Sept. 11, 2022. (AP Photo/Susan Walsh)

Biden honors 9/11 victims during Pentagon ceremony
President Biden paid tribute to 9/11 victims on Sunday morning at the Pentagon memorial ceremony in Arlington, Virginia, acknowledging the terrorist attacks that claimed the lives of over 3,000 people, CNN reported.

In his speech, the President spoke of resilience and the resolve of the American democracy, as well as the drone strike that took place earlier this year, killing al Qaeda leader Ayman al-Zawahiri. Biden said the U.S., “will not rest, we’ll never forget, we will never give up.”

Biden participated in the ceremony by laying a wreath while Vice President Kamala Harris spent the day with victims’ families at the National September 11 Memorial in New York City and attending the service at Ground Zero, according to CNN.
World Health Organization announces fund for future pandemic prevention
Members of the World Health Organization’s newly established Financial Intermediary Fund met Friday for the first time and established a new fund meant to support lower and middle-income countries in future pandemic prevention and response measures.

The fund will focus on developing measures related to disease surveillance, emergency communication, health care officials and other key factors related to pandemics.

The governing board will manage the fund and work with the World Bank, WHO and other stakeholders to continue to implement the plan. The FIF expects to begin accepting proposals for investment in November, according to the World Health Organization.
California fires remain intense despite cooler weather

Firefighters made progress on Sunday as they actively work to contain the Northern California wildfire that has devastated the region, according to The Washington Post.

The Mosquito Fire stretches across almost 65 square miles near Sacramento. Many mountain homes have been destroyed. High winds have spread flames and smoke north into Oregon and Washington.

As firefighters continue to battle the flames, California health officials have encouraged people to avoid the areas and stay inside, even cancelling the annual Tour de Tahoe bike ride in efforts to keep people safe.

California, Oregon and Washington have faced an increase in the last five years of destructive and devastating wildfires, and some scientists assert that climate change will only increase temperatures, making wildfires more frequent and dangerous.
Former Trump advisors subpoenaed

Two aids to former President Trump have been subpoenaed by the Justice Department in connection to the Jan. 6 events as a part of a deeper investigation into the Save America PAC and post-election campaigning by Trump, according to The New York Times.

Brian Jack served as political director under Trump, and Stephen Miller is a speechwriter and senior aid to Trump. They received subpoenas from a federal grand jury to gain more information on the post-election PAC as well as the question regarding the potential case of fake-electors on behalf of Trump.

These subpoenas do not state these individuals are under investigation, rather they are two subpoenaed among many others for information in relation to Trump’s post-election campaigning.

The investigation into the attack on the U.S. Capitol on Jan. 6 is ongoing, and more Trump advisors will likely be called on by the Justice Department to aid in the collection of information.