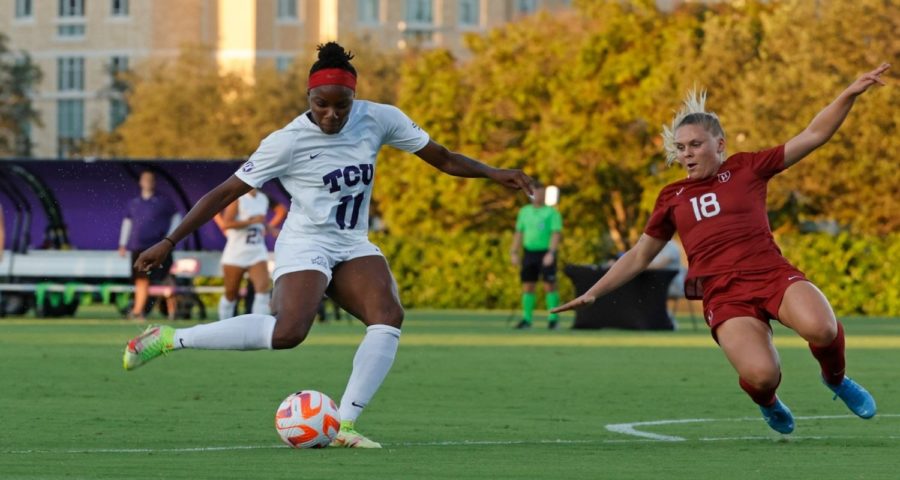 Forward Messiah Bright played a major role in keeping Harvard on its toes by scoring both goals to power the Frog offense.

“I think my biggest thing was just putting [the ball] back in the net,” said Bright.

Head coach Eric Bell was pleased with her game.

“Messiah was Messiah tonight,” said Bell. “She’s a 1st-Team All-American for a reason and she showed that tonight.”

TCU took the lead in the sixth minute after a shot from midfielder Chaylyn Hubbard was deflected back to Bright, who scored the first goal. Good communication gave the Frogs an opportunity.

“I just technically saw the ball pop out,” said Bright. “My main concern was just getting to it first.”

The first half of the game consisted of a lot of back and forth from both sides. Junior goalkeeper Lauren Kellett totaled four saves to keep the Horned Frogs in the lead for the majority of the first half.

As the half came to a close, Harvard sophomore midfielder Ásluag Gunnlaugsdóttir rushed down the field and fired an unassisted, long shot to score the equalizer.

Gunnlaugsdóttir added another goal in the 55th minute that was almost identical to the first, giving Harvard a 2-1 lead.

In the 68th minute, Harvard missed an opportunity to extend the lead with a free kick that bounced off the post. The Horned Frog defense battled to send the ball away from the Harvard offense.

Bright, assisted by Hubbard, recorded the equalizer goal in the 70th minute.

The final moments of the game consisted of many close calls, but the game ended in a tie.