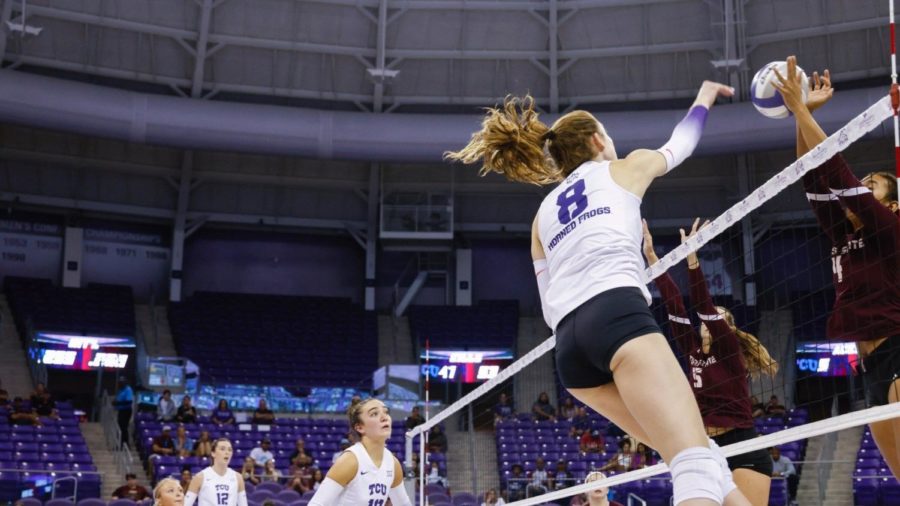 The invitational marked the last tournament before Big 12 Conference play. The Frogs came out with a share of the championship.

Head coach Jason Williams felt like the team had a breakthrough.

“I think we’ve turned a corner,” said Williams. “I don’t know if the momentum is there yet because we’ve been so banged up.”

One of the Frogs’ star players, outside hitter Cecily Bramschreiber, is “out of commission for now” with a foot injury. The Frogs battled through adversity, showcasing their potential on both sides of the ball.
Game 1 vs Alabama
TCU started the tournament with a win over Alabama in four sets (33-35, 25-14, 25-23, 25-16).

The Frogs lost a back-and-forth first set. Williams said he was disappointed in the effort and wants the Frogs to close out sets more efficiently.

TCU responded in the second, securing the largest margin of victory in a set this season.

Setters McKenzie Nichols and Callie Williams, who split time dishing dimes to their hitters, both reached career milestones in the match.

Nichols notched her 25th double-double as a Frog, tallying 16 assists and 11 digs.

“I couldn’t have done it without my teammates,” said Nichols. “Props to them. […] I’m just feeling a lot of joy right now.”

Callie Williams, daughter of coach Williams, spent most of her career at Tennessee and Baylor. She notched her 2,000th career collegiate assist against the Crimson Tide, setting up outside hitter Julia Adams for the kill.

“My hitters make it easy,” said Callie Williams. “[They are] super reliable. They make it a ton of fun. Tonight is not about me, it’s about the team. It’s about the win.”

Although the Frogs made some history offensively, it was the defense that stood out. The Horned Frogs threw a block party at the net, sending back 18.5 Crimson Tide attacks, the third most in program history. Middle blockers MyKayla Myers and Sarah Sylvester both racked up nine blocks.

“9 blocks, that’s huge,” said Jason Williams. “We’ve just been really focusing on [blocking]. We haven’t been putting up the blocking effort that I want. Like I said, we’ve been turning the corner in practice.”
Game 2 vs Abilene Christian
TCU was victorious in game two against Abilene Christian, winning in five sets (21-25, 21-25, 28-26, 25-21, 15-8) and clinching a share of the tournament title.

The Frogs kept fans on their toes on Saturday morning after losing the first two sets to the wildcats. TCU was gritty as ACU drew long points and big blocks. Their opponent fell short in service and miscommunication errors.

The momentum began to shift inside Schollmaier Arena when senior outside hitter Audrey Nalls had a series of powerful and crucial kills towards the end of the third set. Nalls ended the match with a game-high of 18 kills, with 16 being in the final three sets. The win marks the first time TCU has come back from a multiple-set deficit this season.

Other pivotal players in TCU’s victory over the Wildcats included outside hitter Julia Adams, who tallied 14 kills, and McKenzie Nichols, who had a game-high 23 digs. Adams surpassed 900 career kills in the contest, further solidifying her dominance on the court.

The team tallied many season highs, including 70 digs, 63 kills and 59 assists.
Game 3 vs Texas State
The Horned Frogs lost the final match of the tournament Saturday night against the Texas State Bobcats in four sets (22-25, 25-21, 19-25, 22-25). Outside hitter Julia Adams and middle blocker Mykayla Myers showed up for the Frogs during the second set of the game with a combined 20 kills and 13 blocks.

The Schollmaier was filled with fans on both sides. Nichols shared the importance of keeping energy levels high for the final match.

“You’ve got to dial it back in for the evening match and just take recovery very seriously so you can have your stamina for the last match,” said Nichols.

TCU displayed an impressive close four sets but couldn’t come out of the match with a win. Nichols commented on her team’s performance at the end of the night.

“Today was an exciting match in the beginning, still not where we want to be, but I think we’re improving,” said Nichols. “I can tell that we are improving.”
Up Next
TCU, who has won four of their last six, will play Baylor to start Big 12 Conference play at 7 p.m. on September 21 at the Ferrell Center in Waco, Texas.