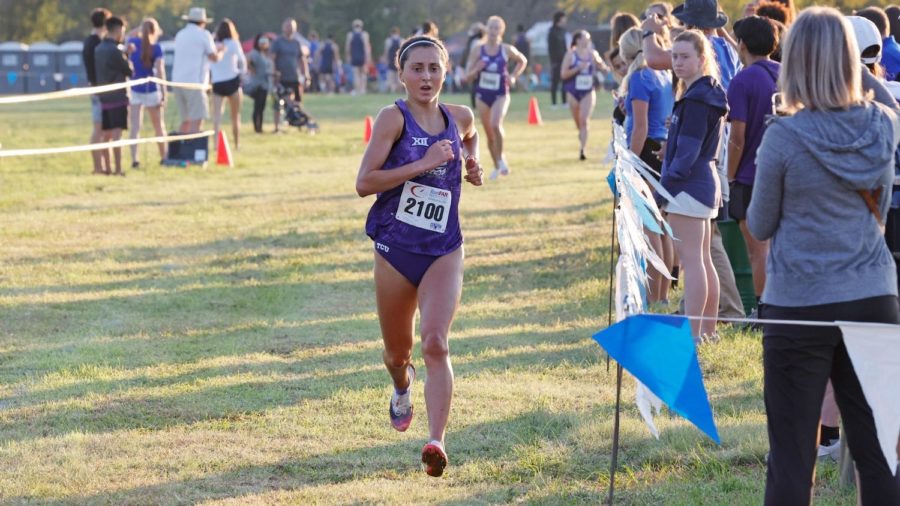 Gracie Morris once again took charge on the 5k course with a second-place finish overall. She ran a time of 17:21.3 (5:35/mile), just 10 seconds behind the lead runner.

The rest of the women’s team followed close behind, all finishing in the top-25 overall and within the top 20 as far as scoring goes.

Freshman Erica Francesconi swapped places with Mariana Martinez this week, finishing 6th overall and second on the team in a time of 18:10.3 (5:50/mile). Martinez took 8th overall and finished in 18:18.5 (5:53/mile) after crossing the 1.7k mark right behind Francesconi.

With another second-place finish and a 1-7 split of 1:43, they showed another example of why they have the potential to place high in the Big 12 Championship and move on to NCAA regionals.

“The women ran a gutsy race…they went out there with a plan and executed it solidly,” said assistant coach Roger Cooke.
On the men’s side
The men’s team had a good showing last week at the UTA meet, but met a different challenge this week at the Texas A&M Invitational 8k course, which is equivalent to about 4.97 miles.

“Coming into the season, a few top guys have been banged up with injuries, which has given [me] an opportunity to step up and help out the team,” said Kirk.

At the 1.7k mark, Kirk was in 24th place. TCU’s top three all dropped around 14 places from the 1.7k mark, a little over a mile into the race. They started strong, but bit off more than they could chew and fell behind throughout the race.

It’s a point the coaches have made clear is important, especially with a team lacking a fully-healthy roster.

This was the first 8k race for the men’s team, matching length they will race when they get to the Big 12 Championships.
Looking ahead
TCU heads into “Hell Month,” where “training ramps up and workouts become extremely difficult to complete,” said Kirk.

Despite the name, Kirk said he is more excited about getting into harder training over the next month than he is intimidated by it.

After the month-long training emphasis, the teams will return to College Station for the Texas A&M Arturo Barrios Invitational on Saturday, Oct. 15. The week after that will be the Big 12 Championship meet.