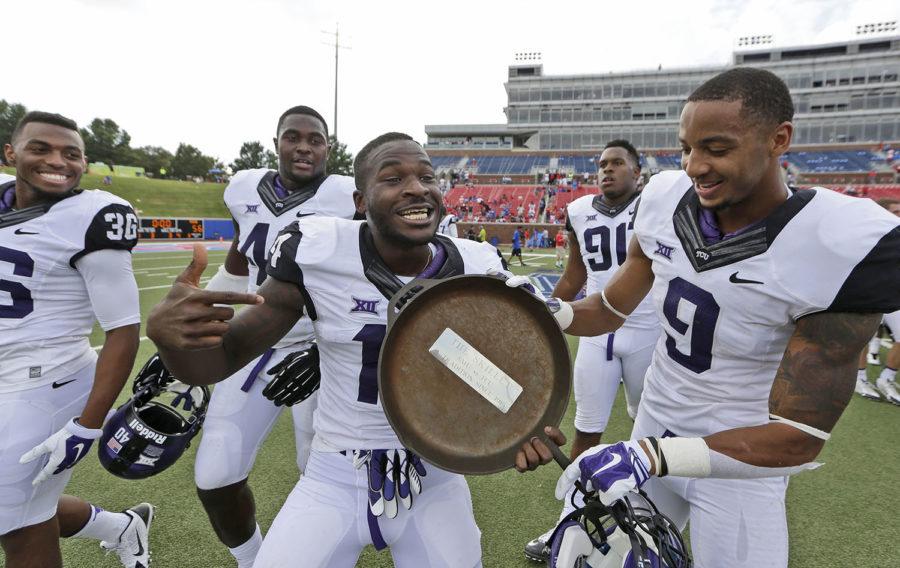 TCU wide receiver David Porter (14) shows off the famed Iron Skillet with teammate and fellow wide receiver Josh Doctson (9) after their 56-0 win over SMU in an NCAA college football game Sept. 27, 2014, in Dallas. The Skillet goes the the winner of the SMU-TCU game and has been a tradition since 1915. (AP Photo/LM Otero)

TCU and SMU’s long-standing rivalry heats up again on Saturday when head coach Sonny Dykes returns to Gerald J. Ford Stadium to vie for the Iron Skillet on the visitor’s sidelines.

SMU receiver Rashee Rice on 9/21:
“No one comes to Texas for Fort Worth. They come for Dallas.”

Rice’s head coach 70 days later:
“It’s my sincere pleasure to be here and be a part of this wonderful #TCU football program.”

Life comes at you fast.

One year later, the receiver cooled down his comments on the game.

We talked with SMU WR Rashee Rice today. He made sure to not turn up the heat on the Iron Skillet rivalry like he did last season.

“They’re a pretty good defense. I look forward to playing my old coaching staff and doing that on Saturday.”

While Rice turned down the heat in the comments, he’ll still be one of the top receivers on the field. Dykes said the matchup between Tre’Vius Hodges-Tomlinson and Rice is going to be fun to watch.

Dykes also embraced the tensions of the Iron Skillet and the boos that inevitably await him in Dallas when he comes out in purple.

“If I bought a ticket to the game, I’d boo me too,” said Dykes.
Riding the purple wave
TCU comes out of a bye week, hoping to hold on to the momentum they gained with two wins to open the season. Those first two wins under Dykes is the first time that a new TCU head coach has won their opening two games since Horned Frog coaching legend Dutch Meyer started his tenure

TCU goes into this week as the only undefeated FBS program in Texas.

Senior running back Emari Demercado is also on a milestone watch, just 10 rushing yards away from 1,000.

Junior running back Kendre Miller is leading the team in rushing yards with 108. His 7.08 yards-per-carry ranks first nationally among Power-5 schools and third among all-FBS schools.

This means he is one place ahead of former-TCU running back Zach Evans of Ole Miss who transferred after Gary Patterson left the program. Evans is fifth with 7.07 yards-per-carry.

Freshman wide receiver Jordan Hudson leads the Frogs in receiving yards with 84, which came as a surprise to himself, as he said after the game against Tarleton.

Senior punter Jordy Sandy has shown off his ability to put the ball right where he wants it over the first two games of the season. He’s punted four times with three inside the 20 yard line, two of those were inside the 10 yard line and one settled at the 1 yard line. Through his first four, Sandy has an average of 40.3 yards per punt.

It will be Sandy and other seniors’ first time firing up the Iron Skillet in Dallas, as the teams haven’t played each other at SMU since 2018. One senior, offensive lineman Steve Avila, is excited for the crowd.

“I’m excited to see the environment, I know a lot of TCU fans will be there,” said Avila. “This is going to be one of those packed games.”

Avila is right from the looks of it. There are barely any tickets left and the ones that are left are selling for upwards of $250.

Offensive lineman Alan Ali transferred to TCU when Dykes came over. Like safety Mark Perry against Colorado, Ali will be facing his former team.

“He’s played a major role, along with the coaches, in our preparation for this game,” said Avila. “They know the strengths and the weaknesses of their defense, so we lean towards them to prepare.”
One game at a time
Players and coaches alike said the game should be played like any other game, despite the buzz the matchup has spurred between the fan bases.

“We’ve got to treat every single game the same,” said Dykes. “It doesn’t matter if we’re playing Alabama or Tarleton, we’ve got to play our very best.”

Junior wide receiver Quentin Johnston said he notices the trash talk online, but said, “at the end of the day, it’s still a football game so we can’t take it any more lightly than any other game.”

Avila said it’s easier for the players, more than the coaches, to stay focused on the game in a rivalry like this.

The Horned Frogs come into Saturday’s game 51-42-7 all-time against their Dallas rivals with a slight edge over them when playing in Dallas. They’re looking to keep their record above .500 at SMU and currently have a 23-22-2 record.

If Dykes can win against his previous team, he’ll become the first TCU head coach to win his opening three games since Francis Schmidt in 1929. It would also be the Frogs’ first 3-0 start since 2017, when Dykes was an offensive analyst under Gary Patterson.

The 101st battle for the Iron Skillet will be played Saturday at 11 a.m. and can be watched on ESPNU.