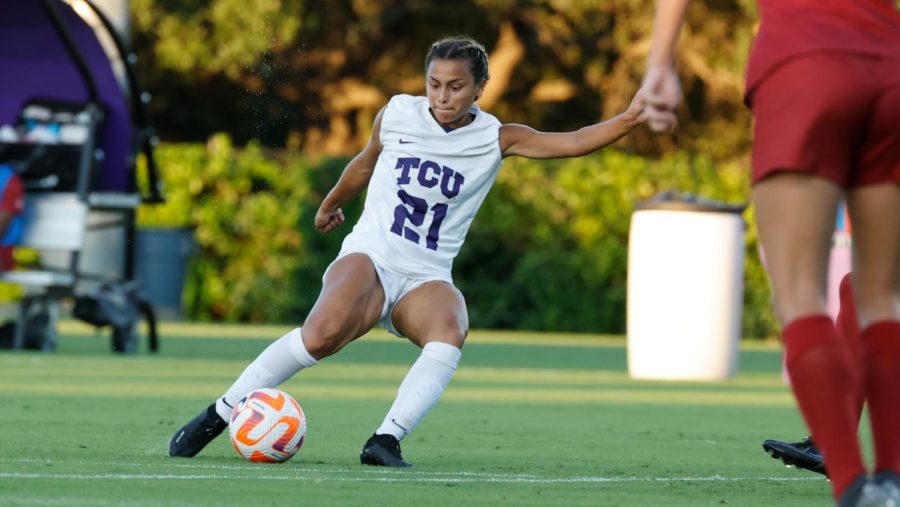 TCU soccer starts Big 12 conference play on Thursday against the University of Texas.

“We’ve had a lot of competition through non-conference,” Messiah Bright, graduate forward, said. “I think it will prepare us for Big 12 play.”

“We are a work in progress,” head coach Eric Bell said. “We still have some time to make some things better.”

Messiah Bright has dominated the field during non-conference play. Bright is going into Big 12 play with seven goals and two assists under her belt. As a forward, Bright is an aggressive player who can fight off multiple defenders to earn a goal. Bright has totaled 500 minutes of playing time and started every game.

Tyler Isgrig has been a threat during her first season at TCU. With five goals and two assists, Isgrig has molded well into the Horned Frog team. Isgrig also earned Big 12 Freshman of the Week after two tough games against Texas A&M and Texas State.

Oli Pena has played a major role in TCU’s preseason victories. Pena has started every game and attained three assists and eight shots. As a midfielder, Pena has kept the Horned Frog defense tight and aggressive.
Texas Preview
TCU will face off against No. 20 University of Texas at home.

The last time TCU faced UT was at the 2021 Big 12 Championship, where the Frogs were victorious 2-1.

TCU’s biggest threat in the Big 12 is the Longhorns. UT finished non-conference play with a 6-1-2 record after playing one ranked team and have been predicted to be a close second in Big 12 play.