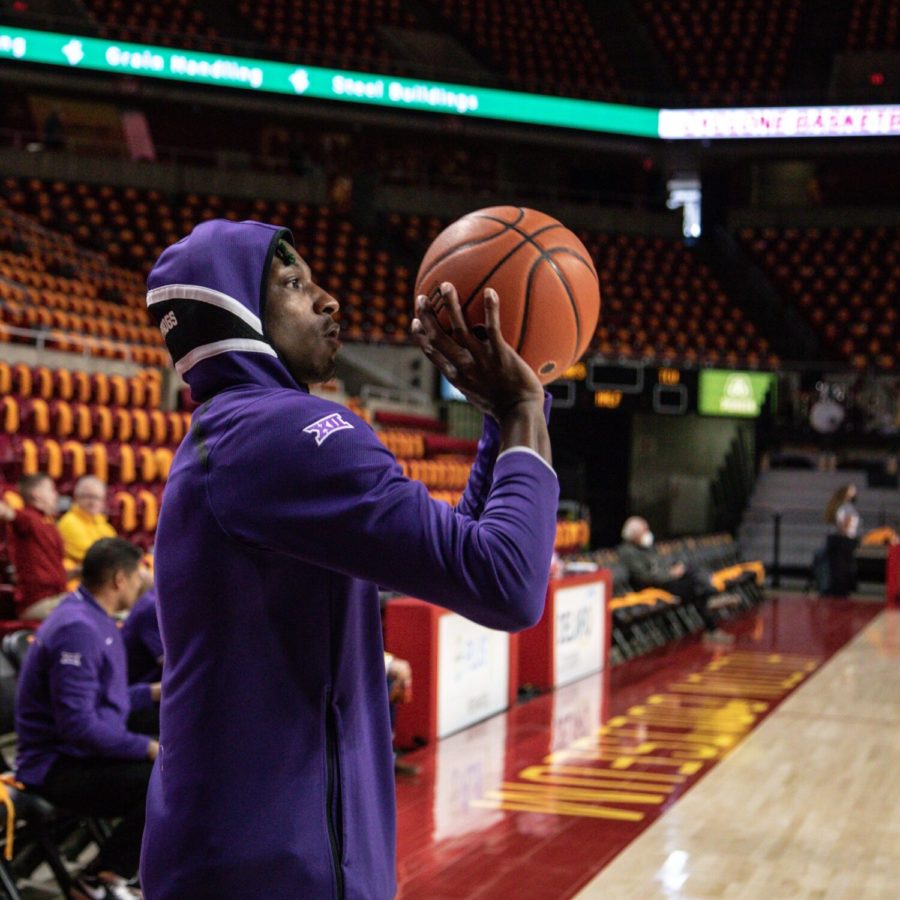 TCU's Damion Baugh warms up before the Frogs' clash with No. 15 Iowa State at Hilton Coliseum in Ames, Iowa, on Jan. 22, 2022. (Photo courtesy of gofrogs.com)

TCU basketball’s senior guard Damion Baugh is appealing a NCAA suspension during the 2022-23 season for an indefinite amount of games, according to College Hoops Today.

The suspension stems from last spring when Baugh signed with a non-certified agent during the NBA pre-draft process. Baugh had plans of entering the 2022 NBA Draft, but decided to withdraw his name and return for his senior season with the Horned Frogs.

There’s an approved list of agents that athletes can sign with while still maintaining their college eligibility, should they choose to return back to school. Baugh signed with an agent that was not on the approved list and the NCAA suspended him for an undisclosed amount of games.

Baugh’s mother, Samantha Baugh, insisted that his involvement with the agent lasted for a couple of days.  She said that he did not receive any benefits nor did he participate in any NBA workouts.

“It wasn’t a long time,” Samantha Baugh said to College Hoops Today regarding the period that her son had a non-certified agent. “He didn’t take anything. It was a difficult time and it was just a time where a kid was just trying to help his family. Damion wanted to figure out how to help us. He has a daughter. But in the end, school is where he wanted to be.”

After transferring from Memphis, Baugh made an immediate impact as a Frog, averaging 10.6 points, 4.4 rebounds and 4.5 assists on 31 minutes per game last season. His addition contributed to the team’s 21-13 record and the program’s first NCAA Tournament victory since 1987.

Now ranked 17th in ESPN’s Way-Too-Early Top 25 men’s basketball rankings, TCU is expected to improve on a season where they were an overtime period away from reaching the Sweet 16. The Frogs were able to retain most of their roster from last season, including a starting lineup that averaged 52.6 points out of the team’s overall 68.5 points per game.

With Baugh’s eligibility and status in jeopardy, the Frogs’ season hinges on the NCAA’s decision.