TCU volleyball flashes potential in four-set loss to No. 14 Baylor 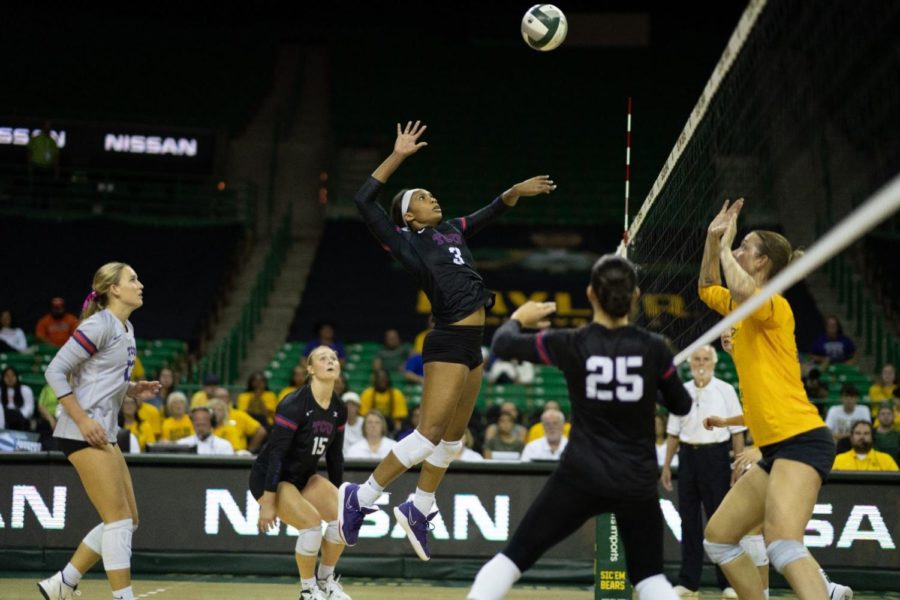 Playing a top-15 opponent on the road is a tough task to open Big 12 Conference play. No. 14 Baylor volleyball hadn’t lost a set in 8 matches but the Frogs didn’t back down, making the Bears scratch and claw their way to victory.

“Second set, I think we kind of gave it away,” said head coach Jason Williams. “We had our opportunities before it got into extra points. I think if we were to make a couple plays in the second set, we’d probably be finishing the fifth set.”

TCU followed it up by dominating in the third set, snapping Baylor’s 27-set victory streak. Williams said that he was encouraged by the Frogs’ performance but that more work needs to be done.

“I joke with people at TCU that I feel like we’ve turned a corner, but our jerseys are stuck to that nail on the corner,” said Williams. “We just can’t pull away yet, but there’s still a lot of conference [games] left.”

Outside hitter Audrey Nalls kept TCU within striking distance, tallying 22 kills on .315 percent hitting and 13 digs in the match. She willed the Frogs to victory in the third set.

Williams said he was happy with what the team has been focusing on in terms of the offense but wasn’t satisfied with the efficiency.

“Our kill percentage is still okay,” said Williams. “We just can’t error ourselves out of matches against good teams.”

Outside Julia Adams finished with 15 kills but also had 10 attacking errors. The Baylor block was intimidating, forcing the Frogs, who averaged a .236 hitting percentage, to make mistakes.

Setter Callie Williams dropped 28 dimes and registered 6 digs, while fellow setter McKenzie Nichols had 20 assists and 7 digs. Although the Frogs lost, they showed potential and promise.

“We’re really making some strides,” said Williams. “There are some players who are untrained, so it takes a little bit of time. It’s a little bit different of a system, so it’s taking time to sink in. But there’s some parts of our game that are really good. We’ve just got to get better at some of the deficiencies.”
Up Next
TCU volleyball will play Iowa State on Saturday at 2 p.m. at Schollmaier Arena in Fort Worth, Texas.